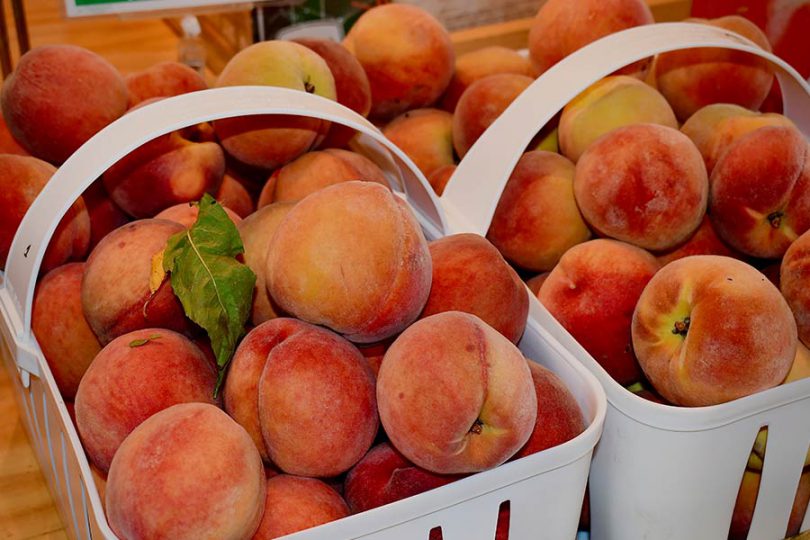 Perhaps nowhere is the peach more honored than during the annual Palisade Peach Festival, when “everything peach” is celebrated the third week of August.

Now entering its 53rd year, the event draws more than 12,000 people to Palisade for two days of all things peach, from picking the fruit and touring orchards to dinners where local chefs pair wines with peach-themed dinners and desserts. Think lamb chops, chicken and pork with a peach glaze, peach balsamic vinaigrette, grilled peaches, peach salsa, cold peach habanero soup, and teams competing in a peach BBQ showdown — which Charles Talbott has won — and cobbler competitions.

At the end of the festival, organizers hold a “de-fuzz” meeting to talk about how to make it even better. “It’s a true community event celebrating the crown jewel of our valley,” says Juliann Adams, of Vines 79 winery. “It draws peach lovers of all sorts, many of whom are pretty particular about their peaches. Some people are varietal-specific and only eat one kind.”

More to do in Palisade
Of course, there’s plenty to do in Palisade apart from eating its peaches, from bike-touring wineries, sampling fresh fruits at orchards and the Farmer’s Market. There’s also traversing the Colorado River, exploring breweries and distilleries, and biking and hiking area trails.

“We’re trying to put Palisade on the map as a farming mountain town, instead of a ski resort town,” says Charles Talbott, 28, the sixth generation to work at the heralded Talbott Farms. “It’s got a pretty chill vibe.”

Wineries
With as many as 40 wineries in the region, including five within a 1-mile radius, Palisade is the perfect place for a pedal-tasting tour on cruisers or E-bikes. Talbott Farms and the Talbott’s Cider Co. is one of the first stops on the Fruit & Wine Byway tour. Talbott converts the seconds of its peaches, grapes, pears and apples into cider and wine onsite, so you won’t find fresher libations anywhere (try its top-selling Colomosa Cider or the Peach Jalapeno Cider). Hint: Visit when live music comes to its new outdoor stage made from apple crates.

Other popular wineries include Restoration Vineyards, named for gregarious German owner Gary Brauns, who has a “restoration” hobby including everything from homes to his beloved Mercedes. The 10-acre vineyard is located on East Orchard Mesa above the Colorado River, with six varieties of grapes: Barbera, Cabernet Franc, Merlot, Chardonnay, Sauvignon Blanc and Semillo.

Family-owned Carlson Vineyards is one of the region’s oldest wineries and winner of hundreds of awards, including double golds, best-of fests and the international World Cup Riesling Award. Try this year’s Sweet Baby Blush, with notes of watermelon and citrus zest, with acidity balancing out the sweetness.

Other Places to Imbibe
Tired of wine (you poor soul)? Palisade Brewing Co. prides itself on “making beer in wine country,” led by head brewer Danny Wilson. Try its Laid Back Blonde, non-traditional wheat Dirty Hippie and the Hula Hoppie. Fun fact: In the olden days, the brewery’s owners used to chisel ice from the Colorado River to chill their ales.

Wander the Region
Biking: Try the new Plunge Trail, a 33.8-mile descent from the top of Grand Mesa to Palisade, a whopping 6,000 vertical feet below. The nearby town of Fruita serves up some of the best desert singletrack around at 18 Road (try Zippity, PBR and Chutes and Ladders) and along the Colorado River (try Mary’s Loop to Horsethief Bench, Steve’s and a return via Wrangler). Grand Junction offers the Lunch Loops and its famous Ribbon ride, while Colorado National Monument serves up some of the best road riding in the state. Rapid Creek Cycles has everything you need, from rentals for wineries and trails (cruisers, E-bikes, mountain and more) to maps, gear and shuttles to the start of the Plunge ($35/person).

Hiking: Glutes sore from biking? Give your cheeks a break by letting your feet do the work, hiking the area’s many trails. Favorites include the scamper up Lincoln and Garfield peaks, squishing through a rock fissure aptly named Lemon Squeeze in route. Hint: Keep an eye out for wild horses.

Hit the River: On the dog days of summer, cool off in the Colorado by floating the town run in whatever floats your boat, be it a tube, inflatable swan or paddleboard. Two SUP companies rent paddleboards for guided or self-guided floats down the Colorado River.

Newly opened downtown, Pêche, French for peach, is headed by executive chef/owner Matthew Chasseur, who whips up everything from Thai-fried chicken and fresh lamb to port short ribs and charred ribeye. Also look for Food Truck Friday, where the area’s food trucks, serving up everything from barbecue vittles to Thai, congregate at different locations, including a grassy lawn at St. Catharine’s Winery.

Local Fruit Stands: Bring Palisade’s fresh produce with you on the trail, back to your room and even back home by visiting its numerous local fruit stands, carrying everything from juice-dripping fruit to fresh veggies. Favorites include Blaine’s Farm Store, specializing in greenhouse and specialty-grown fruits, tomatoes and cucumbers, as well as local jams and jellies; Field To Fork, a decade-old, four-season, fruit and veggie farm using “new organic growers” techniques, with 52 weeks of fresh harvests; and Sweet Cheeks peach stand, serving up seven different varieties of organic peaches on 20 acres.

Accommodations: Owned by avid bikers Jeff Snook and Jody Corey, Spoke & Vine is a hipply renovated, boutique-style, 1950s era motel catering to winery and trail bikers with cruiser bikes, craft beers, corn hole, fresh coffee and more. Within walking distance of downtown eats and drinks, look for live music and food trucks (Pali-Thai Mondays), an antique pencil sharpener display in the lobby, and quirky, welcoming website banter (“If you’re ‘high maintenance’ this might not be the place for you” and “our single room queen is small A.F.”).

Former reporter Eugene Buchanan explores the outdoors of Colorado and beyond from his home base in Steamboat Springs.