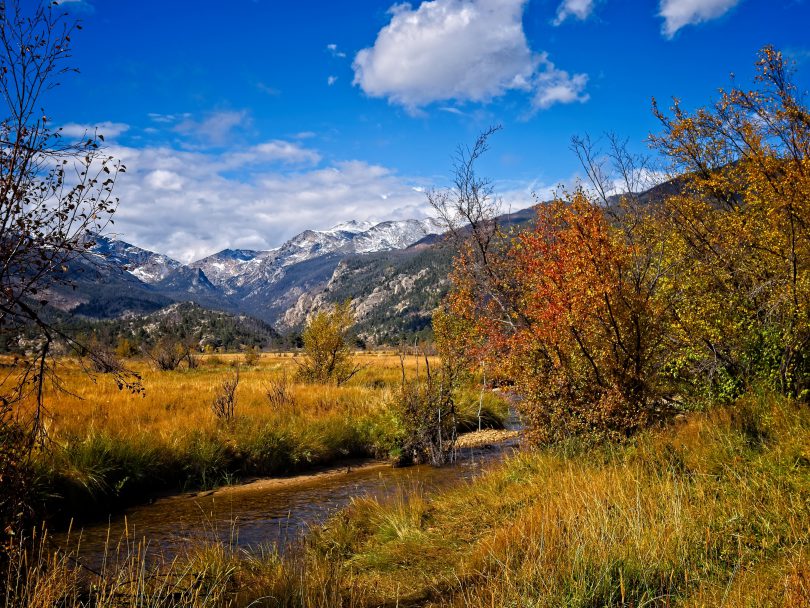 A small mountain creek in autumn. Photo by Dennis Smith.

I’m one of those guys who really looks forward to autumn fly fishing, and I think September in Colorado might just be the best month of all for fishing the mountain creeks — although “best” in this case is a relative term, depending on whom you’re speaking with.

Most of the seasonal insect hatches of summer are over. The mayflies, stoneflies and caddis flights that brought the fish up all season long are now just so much detritus and biological goo disintegrating on the bottom of the streams. The streams themselves are likely to be mere trickles compared to the generous flows following summer runoff.

These low, clear flows make the fish spooky and difficult to approach, but the water is cooler now and that just energizes the fish, stimulates their metabolism and makes them hungry and eager to feed — almost as if they know summer’s bounty is dwindling and they can’t afford to pass up any free food. Fishing terrestrial patterns like beetles, ants, grasshoppers and attractor dry flies in autumn can generate some of the most exciting dry fly moments of the year.

Fall-spawning brook and brown trout become aggressive and territorial in autumn, sometimes attacking flies out of sheer meanness triggered by the parental urge to protect their redds (nests) against marauding egg eaters. Fly fishermen hip to this behavior often do well casting bright-colored streamers that mimic minnows, crawfish, leeches and even other trout to provoke strikes from the otherwise reclusive browns.

Anglers who are willing to put the sneak on low-water trout use long, fine leaders and make careful casts and take great satisfaction in fooling these super-spooky trout. But for many of us it is simply the magic of being alone on a backcountry creek cloaked in a riot of fall color that defines autumn as the best fly-fishing season of all. That, and perhaps the realization that winter will soon bring it all to a cold, dreary end.