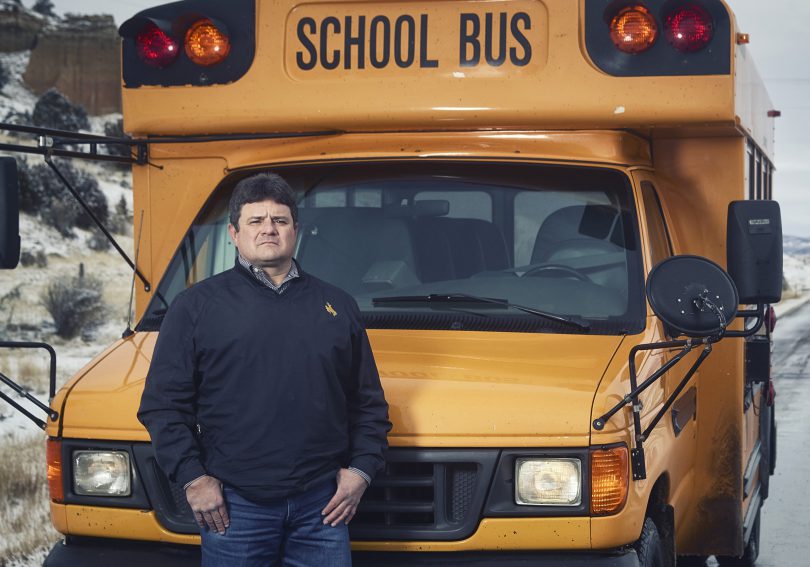 “It was one of those wrong place at the wrong time type of deals,” Clint Shults says. On a snowy morning in April 2016, Clint loaded a school bus with FFA students from Meeker High School. The group was heading to a competition at Colorado Northwest Community College, about 65 miles away. A heavy, wet snow was accumulating.

Out of the corner of his eye, Clint saw a flash of snow falling off a power line and then heard the sound of a wire coiling. From behind the bus, Silvia witnessed several bursts of fire. The bus had snagged a power line just as it was falling to the ground under the weight of the snow.

“There’s an unmistakable sound, if you’ve ever heard wire unraveling from a roll,” Clint says, “the noise of us dragging the wire across the highway and just through the air… and then the strain of the wire as it became unraveled.” Rather than throwing on the brakes, Clint took his foot off the accelerator and let the bus coast to a stop.

Behind the bus, Silvia’s first thought was to get out of her car and check that the students were unharmed. Luckily, a phone call from a student kept her safe. “They all started yelling at me on the phone,” she explains. “At that point, I knew we were in pretty big trouble.”

Amidst the chaos, Clint and his wife, who was also on the bus, were able to keep the students calm and call 911 to notify dispatchers of the accident. Once Clint was able to assess the situation, his next concern was whether oncoming traffic would be able to stop in time, as the bus signals had shorted out.

John Purkey, line superintendent from White River Electric Association, and Sherriff Anthony Mazzola soon arrived on the scene. Sheriff Mazzola says, “John Purkey got out first. He needed to secure the scene.” He ensured that the lines were de-energized and untangled from the bus and that the scene was safe before first responders moved in.

White River Electric had regularly provided training to local first responders. “We knew from this training that you don’t approach a scene because there is such a thing as step voltage, that even though the wire is on the ground as you walk into that scene, you could be stepping into different voltage variations and injure yourself,” Sheriff Mazzola explains.

“In my opinion, a very dangerous situation was avoided because the correct steps were taken,” Silvia says. “People were patient. People communicated. Luckily, we had cell phones and help was there almost immediately.”

Afterward, the students and adult volunteers were able to continue according to schedule. “We were told to get back on the bus, went on to CNCC and competed,” Clint says. “Some of the kids got their names called and it ended up being a good day in spite of what happened that morning.”

Clint and others are working with Safe Electricity to share their story so that others can learn from their experience. Safe Electricity wants you to know the steps to take to stay safe if you are in a vehicle that comes into contact with a downed line or power pole:
1. Stay calm and stay inside the vehicle.
2. Call 911.
3. Warn others to stay away from the vehicle.
4. Stay seated and do not exit the vehicle until utility personnel say it is OK to do so.
5. If you must exit the vehicle because it is on fire, jump clear of it with your feet together and without touching the vehicle and ground at the same time. Keeping your feet together, shuffle or “bunny hop” to safety.

For other chaperones who travel with students and might encounter a downed power line, Clint urges, “Do not tell any young person or any passenger to get off the bus.”

”Electricity is invisible, and there is no way to determine visually if a wire is energized,” explains Frank Sampson, manager of operations at White River Electric. “Never assume that a wire has or doesn’t have electricity in it because you can’t see it. You can only see the effect of it, and it travels at the speed of light. It’s extremely destructive and exceedingly fast.”

After 26 years in law enforcement, Sheriff Mazzola knows firsthand the importance of electrical safety education. “Everybody needs to know what electricity can do and we all need to be aware of it.”

Watch the story in the video below. Learn more at SafeElectricity.org.