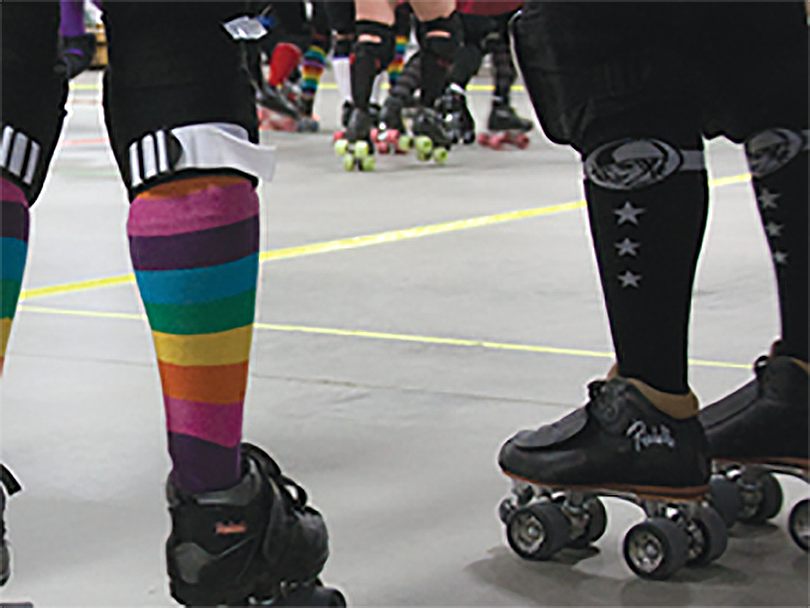 “I’d been warned: It’s not your grandma’s roller derby anymore.”

If roller derby isn’t the game of skate-and-scratch choreographed, movie mayhem shown in the 1972 movie Kansas City Bomber, then what is it? How about a family-tight organization of women who want to compete in an intensely competitive contact sport described by team supporters as “an extreme race on eight wheels.”

Roller derby is the fastest growing sanctioned amateur sport in the U.S. and a dozen other countries. The count changes quickly, but I counted 109 full member leagues (53 apprentice leagues) sanctioned by the Women’s Flat Track Derby Association in the U.S., 32 in the western division alone.

Seven of those league members are in Colorado, including teams in Colorado Springs, Fort Collins, Greeley, Pueblo and, of course, Denver. There are at least another 12 flat track teams in the state, skating in places like Cañon City, Durango, Glenwood Springs and Grand Junction and working toward league membership.

I’d done my homework; I’d Googled, Wikied, and watched Whip It! (Be Your Own Hero), Drew Barrymore’s directorial debut film starring Ellen Page. I’d read skaters Jennifer Kasey BomberBarbee and Alex Axles of EvilCohen’s smash-mouth book, Down and Derby. It was time to find out more.

My problem was which league to watch first. I decided on the one closest to where I live, the Denver Roller Dolls. I thought I was ready for the real thing. With my Rockies-Nuggets-Bronco-Buffs sports-fan husband in tow, we headed out to experience roller derby in living color.

As we merged into the concourse crowd at 1st Bank Center in Broomfield (6,500 capacity), a line out of a YouTube trailer for Kansas City Bomber popped into my mind: “This is the world of roller sports where the only thing more dangerous than the competition is the fans.” Not!

This was an eclectic crowd with the emphasis on youth and those young at heart. Families with toddlers, teens in tutus and glitter eye shadow, hand-holding senior couples and the casual hands-in-pockets guys scoping out the sideways-glancing gals, while preteen girls orbited the fantastically uniformed star skaters, who made eye contact like they’d just spotted their favorite fan. I had the same feeling I get on opening day at Coors Field — regardless of who wins, this is going to be fun.

A uniformed skater tipped to a stop on her wheels and handed me the evening’s program. 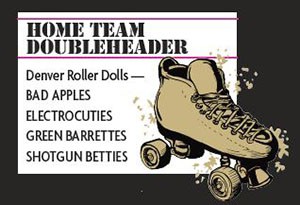 I’d seen the tatts and fishnets; read players’ unique derby names like Bria Fraid, Angela Death, To Infinity and Yvonne, and Fonda Payne; and realized that not only do the colorful names and creative costume scream “watch me,” they also include a steady, reassuring hum of understated strength from skilled, agile, speed-skating team players with hearts that take over when the endurance runs out.

Upbeat music pounded out from the flat track arena as we filed in to find our seats. One section was reserved at $25, all other seats were $15 general admission. We sat high in row 16. Prime seats in the lst Bank Center filled quickly, and Brad Example, the voice of the Denver Roller Dolls, boomed out a welcome and started a quick rundown of rules for newbie fans like us.

Derby’s popularity drew so many new skaters for the Roller Dolls that it required reshuffling seasoned players with newcomers to add a fourth team to the league’s roster. The Electrocuties will take on the 2010 champs, the Bad Apples, for the ’Cuties maiden bout, and these teams are ready to rumble. The two stripe-helmeted pivots out front, the four-pack on hair-trigger behind them, the star-helmeted jammers, afterburners warmed up, wait for the ref’s whistle to send them all into orbit.

The next 30 minutes went by like five. My eyes couldn’t record one image before another formed. My eyes and brain seemed to function on separate circuits. By the time I thought “that’s a point” the jammer called off the jam and it all started over. The Electrocuties skated fast and hit hard, but the Bad Apples turned out to be the spoilers in the first bout.

Finally, near the end of the second 30-minute period, I began to see patterns and strategies, could follow one jammer through a jam and sometimes recognize a point had been scored before it made it onto the score clock. I realized the Swiss Missile was a formidable jammer, and the Bad Apples soured the victory for the Electrocuties. 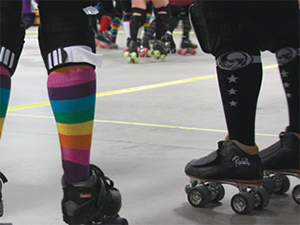 Jump to the second half of the main event: the Shotgun Betties versus the Green Barrettes. Fatigue green versus hot pink and chocolate. By the second 30-minute period of the bout, I was so absorbed in the hard hits, the falls and recoveries, the pack plays, the agility of the jammer to get though holes that weren’t there, the 1 to 3-4 point spread back and forth between the teams that I had to make myself relax and breathe.

The intensity was contagious. The clock showed 2:07 left with The Shotgun Betties at 70, the Green Barrettes at 73. Two jammers dominated the track: Ajax for the Barrettes and Juska for the Betties. Juska blasted out for a 25-point jam ending at 0:00 on the clock just as the Barrettes called for a time-out, extending the period. With Juska skating under a power jam call — Ajax on the penalty bench — the Betties took the second period 109 to 73. A spectacular finish; I was hooked.

I watched the fans move onto the track to get autographs. All the skaters were engaged but I noticed one Shotgun Betty close to my side of the track strike up a conversation with each fan as she signed the requested autograph. A striking bird tattoo across one shoulder that extended down her arm contrasted with the Bijou Blacnbleu blazoned on her shirt.

That name rang a bell. I needed to talk to her. “There’s more than black and blue to this skater,” I remarked to my husband. I wrote a note that I’d like to interview her, took it down to the track, and handed it to her when there was a break in the fans. That interview is a whole other story.