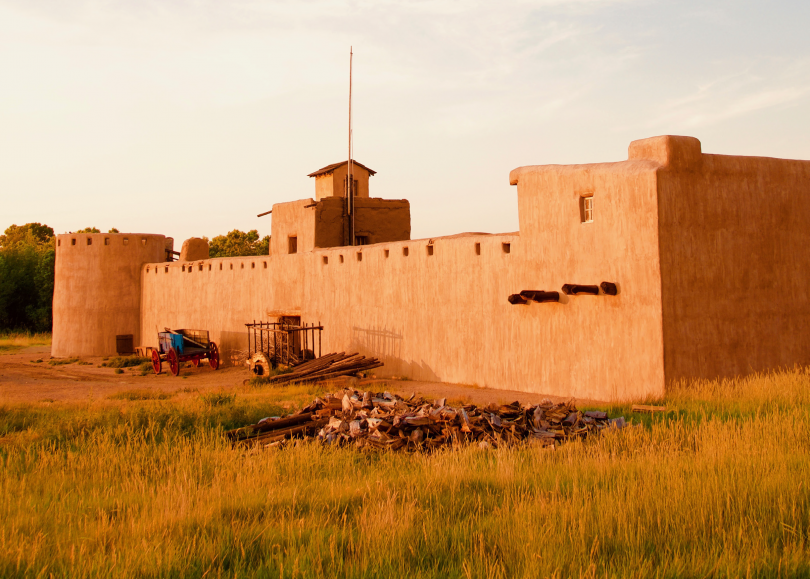 Bent’s Fort and the nearby community of La Junta will host the highly anticipated Santa Fe Trail Bicentennial Symposium on September 22-26. In addition to “an innovative, educational and entertaining program” about the Bent family and the Santa Fe Trail (for more information and a full schedule of events visit the association’s website at 2021sfts.com), there are many other things to do and great places to visit on a southern Colorado tour. Below are just a few options.

Otero Museum: Celebrating the history of Otero County and the early pioneers and settlers along the Arkansas River, the Otero Museum is a worthwhile experience for anyone interested in early Colorado history. The small museum, located at 3rd and Anderson Street in La Junta, features an extensive collection of artifacts from the Atchison, Topeka and Santa Fe Railroad. For information, visit the website at oteromuseum.org; or call 719-384-7500.

The Koshare Museum: This small community museum began as a local Boy Scout project during the Great Depression and has grown into something much more substantial: a celebration of Native American heritage. Most significant is its connection to the world-famous “Taos Art Colony.” Today the Koshare gallery houses original work from some of the greatest artists of Taos and Santa Fa. Call for hours and more information at 719-384-4411.

Comanche National Grassland: Few places in America still provide a glimpse of what the Great Plains were like prior to settlement. Comanche National Grassland is one of them. Encompassing over 440,000 acres across Otero, Las Animas and Baca counties in southeastern Colorado, Comanche offers a wealth of recreational opportunities: hiking, mountain biking, camping, wildlife viewing and more. From a Jurassic site in nearby Vogel Canyon where visitors can see dinosaur footprints frozen in geological time to the rock art of ancient Indians in Picketwire Canyon and Picture Canyon, Comanche is a national treasure. For information, visit the website at fs.usda.gov or call 719-553-1400.

Sand Creek: Almost 150 years after the tragedy took place on November 29, 1864, the U.S. Congress finally designated Sand Creek as a national historic site “to recognize the national significance of the massacre in American history.” The site was officially opened to the public in 2007. Sand Creek honors the more than 200 Cheyenne and Southern Arapaho men, women and children murdered there by the 1st and 3rd Colorado Cavalry Volunteers under the command of Col. John M. Chivington. You can begin your visit at the new National Park Service’s Visitor and Education Center in Eads. For more information, call 719-438-5916.

Boggsville: Located a few miles south of Las Animas on Highway 101, this a must-see for Colorado history buffs. Community founder Thomas Boggs came west in 1840 and worked for William Bent for a time as a trader. Boggs and his wife, Rumalda Luna Boggs, built their ranch near the confluence of the Arkansas River and Purgatoire River in 1862. More buildings were added until Boggsville became a small community where Native Americans and Anglo settlers lived together in harmony, ranching and farming on the nearby plains. Boggsville had many famous residents, including Colorado cattle king John Wesley Prowers and Kit Carson, a world-famous explorer and mountain man. Campsites are available. For information, call 719-456-1358.

Borrowing and misspelling the title of the 1987 hit movie starring Steve Martin and John Candy, we thought it might be interesting to compare modern travel to the early modes of transportation available to trappers, traders and early explorers on the Santa Fe Trail.

Of course, modern travelers can take a plane from St. Louis to Santa Fe today and be there in a little over two hours. Cost of an airline ticket varies between $150 and $600.

Or you can take the “gray dog,” a Greyhound bus, if you have a lot of free time and patience. Travel time is just over 24 hours at the current price of $190. Driving your personal vehicle might be the most common way to get “from here to there.” At today’s fuel prices and varying by your vehicle’s fuel economy, it might cost you anywhere between $120 to $300 for those 16 hours of highway miles.

So, what about the options available to early 19th century travelers facing those same 1,000 miles from the Missouri River to the foot of the Sangre de Christo Mountains?

First, there were two different routes on the Santa Fe Trail. The “Cimmaron Route” shortened travel time by as much as a week for wagon travel. This more expeditious route was charted and surveyed in 1822 with the help of William Becknell and was initially preferred by freighters and wagon trains. The longer but safer “Mountain Route” passing through Bent’s Fort gradually became the favored trail. Despite the daunting challenge of Raton Pass, freighters could generally anticipate an eight-week journey … if things went according to plan, which they often did not.

Conversely, an experienced mountain man on horseback leading a packtrain of horses or mules loaded with supplies might be able to cover 30 miles a day. And he might make that journey in half the time. However, travelers had to worry about torrential rains, hail, blizzards and any number of weather-related obstacles.

Outfitting the trip was expensive. Though prices fluctuated between the 1830 and 1870s, a good horse might cost $150, and a team of oxen might sell anywhere from $50 and up, depending on the quality of the animal. Harnesses, gear and the other necessary tools of the trade made it an expensive proposition. But the high cost of travel was easily offset by the potential profits.

Ceran St. Vrain and the Bent Brothers made tens of thousands of dollars on buffalo robes during the 1830s and 1840s. But what of the lowly mountain man venturing into the Rocky Mountains to trap beaver? For those like Bill Williams, “Uncle” Dick Wooten and Kit Carson, most were more interested in making just enough profit to cover expenses and still make the next rendezvous. Outfitting expenses hinged on the previous year’s success. During the flush times of the beaver trade, the benchmark of a good trapper was 120 beaver skins per season.

Pelts were worth as much as $6 a pound and later far less. A trapper generally made two trips into the High County each year – spring and fall – and in addition to other potential sources of income, his efforts usually netted him about $3,000 annually.

According to Carson, supplies such as sugar ($1.50 per pound), coffee ($1.50 per pound), flour ($1 per pound) were expensive. A good shirt might cost the equivalent of two beaver pelts. And because many of the trappers were inveterate drinkers and gamblers, it could be a hard life when a run of bad luck struck and when whisky sold for more than $30 a gallon. In other words, fur trapping was generally a tough proposition. More than a few mountain men stopped by Bent’s Old Fort with an empty purse and betting on credit to get them through to the next season in the Rockies.

Once the beaver market collapsed, many of the trappers hired out as frontier guides. And some went to work for William Bent as traders on the High Plains, negotiating for buffalo robes with the Plains Indians.