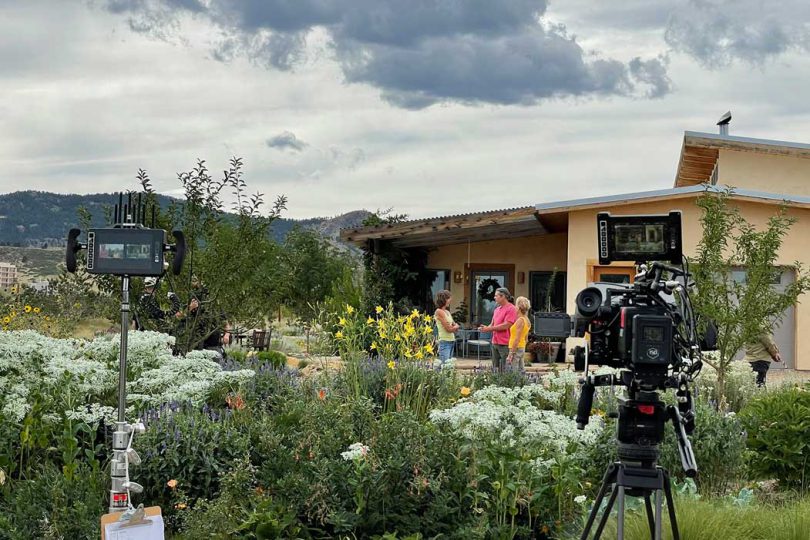 Thanks to a current PBS television series called “GardenFit,” gardeners with aches and pains caused by the repetitive motions of digging, weeding, pruning, stooping and kneeling can learn how to care for their bodies while also caring for their gardens.

Produced by Madeline Hooper and Jeff Hughes, the series emerged from Hooper’s extensive public relations work with top American and European designers, over 20 years of gardening experience, and a broad network of gardening colleagues. Aches and pains led Hooper to Hughes, an award-winning fitness trainer.

Hooper was impressed by Hughes’ philosophy that you “train the mind and the body will follow.” As their friendship developed, they decided to take Hughes’ fitness program to gardeners across the country. In selecting gardens to feature, diversity was the main criteria so that gardeners could envision their own gardens and create their own fitness routines.

Colorado Country Life readers may be particularly interested in episode 7 airing May 4 at 1 p.m. on Colorado PBS 12.1. It will feature a 5-acre garden sitting along the northern Colorado prairie as it rises to the foothills. Horticulturalist/designer Lauren Springer says her “inspiration — whether home, client’s or public — is the beautiful and resilient natural landscapes of drier regions.”

Springer aims “to capture the romantic essence of those special places and also support a wide range of creatures through plant diversity and creating appealing habitats.” The program shows how Springer cares for hundreds of native plants, trees and bushes while remedying wrist and leg pains with simple “do anywhere” exercises that Hughes designed.

Another episode of the 13-episode program shows how Jim Martinez, an expert on native plants throughout Texas and the Southwest, created a unique environment that flourishes in the desert. His garden features diverse natives and exotics situated in five distinct areas, just as they grow in nature. Tending nearly 100 species daily has taken a toll on Hughes’ shoulders and flexibility; his stretches target these concerns.

In Connecticut, a gardener developed a Japanese garden with minimalist design characteristics based on principles of asymmetry and balance. Natural rocks and waterfalls representing life force provide the basic structure. Seasonally-changing plants provide an unique aesthetic in harmony with the traditional tea house. Although the environment was relaxing, the gardener had knee pain that Hughes helped alleviate.

In Middleburg, Virginia, Elaine Burden created an enchanting private garden nestled in a pastoral setting against the Blue Ridge Mountains. The self-taught gardener adjusted traditional garden designs to fit her own style. The result is a unique combination of English borders, formal gardens, and a French parterre on uneven ground. Hughes taught Burden simple movements to counter single directional movements that caused back pain. They are already becoming lifelong pain relief habits.

All of us could benefit from seeing Hughes’ approach to remedying the aches and pains caused by gardening’s repetitive motions. It’s exciting to learn that new movements can become habits after just four weeks and gardening can become less painful. An added bonus for viewers is seeing the magic of diverse gardens featured in the show.