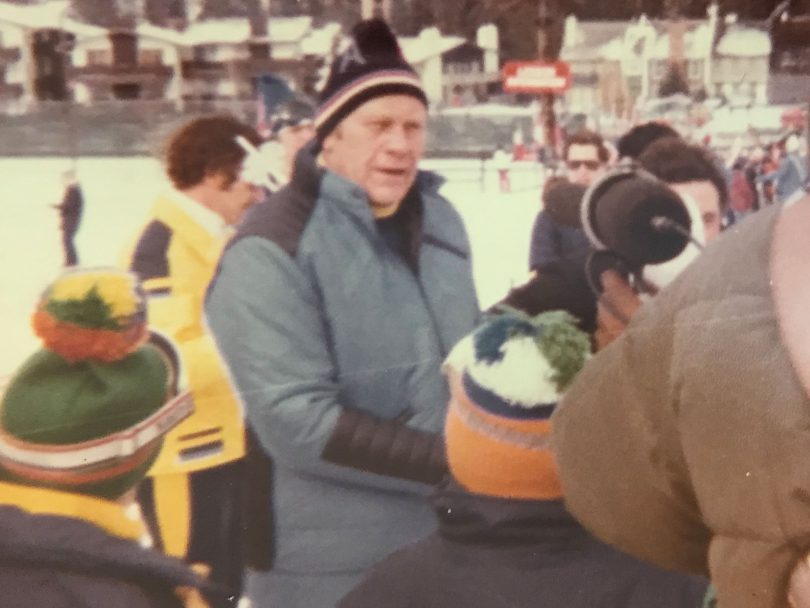 President Ford on the slopes in Vail.

Back in the mid-1970s, my sister Sandy moved from Kansas to Avon, Colorado, so she could ski during the winters and work evenings. She managed the Burger King in Vail in what used to be the Crossroads Shopping Center. (That area today is filled with luxury condos; we both wish she had bought a condo or two back then.) Although she barely eked out enough money for rent, she became a heckuva skier.

During Christmas week of 1976, my folks and I made the trip to Colorado to visit Sis and see Colorado in the winter. It was an epic snow year that winter and I’ll never forget my dad driving over Vail Pass through huge snow tunnels created by the snowplows. We got plenty of snow where I grew up in Topeka, Kansas, but nothing like winter in the Rockies. I’ll also never forget my mother’s nervous laugh as the back end of our Plymouth Fury III occasionally fishtailed on the snow-packed highway.

We arrived safely and the next day my sister “taught” me how to ski. This consisted of some rudimentary explanations of how to snowplow followed by one run down the bunny slope. Having clearly mastered the sport, she then took me straight to the top of the mountain. The next several hours consisted of me falling, swearing, getting up, falling, swearing some more and getting up again. Amazingly, this instructional method actually worked and after a couple of days of bumps and bruises I eventually fell in love with skiing.

On Christmas Eve, we went to the all-faiths chapel in Vail for midnight church services. If you recall your history, 1976 is the year that Jimmy Carter beat Gerald Ford in the presidential election. So in December, Ford was a lame duck president serving out his term and Carter would be inaugurated the following month. You may also recall that the Ford family had a home in Vail and that President Ford was an avid skier. (Despite his occasional trips in public, Ford was probably the most athletic of all U.S. presidents.)

I’m not sure if we were aware of the Ford family connection to Vail at the time, but not long after we were seated in the chapel, President and Mrs. Ford, along with their kids and a couple of what I presume were Secret Service agents entered the chapel.

Mind you, we had not passed through any kind of security screening or metal detector. We were bundled in winter clothes that could have easily concealed all manner of weapons; thankfully, that was not a likely threat given the time and place. The Fords sat in the back so as not to bother anyone, but of course everyone in the small chapel was aware of their presence. I didn’t think about it at the time, but I imagine the pastor might not have had the full attention of the congregants for the Christmas message.

After the service, we filed out into the snowy night and went back to my sister’s place for hot cocoa. Needless to say, my folks were pretty starstruck at the thought of being so close to a president. (They had most likely voted for him the month before.)

From then on it was always part of the Singer family lore that we “spent Christmas with the Fords.” This claim was further substantiated the next day as President Ford walked by us with a small security team, put on his skis and got on the chairlift.

I’ll always remember that Christmas of 1976: Mom posing in front of the Vail covered bridge, learning to ski with my sis, Dad’s intrepid driving. Oh, and did I mention we spent Christmas with the Fords? Merry Christmas to you and yours!