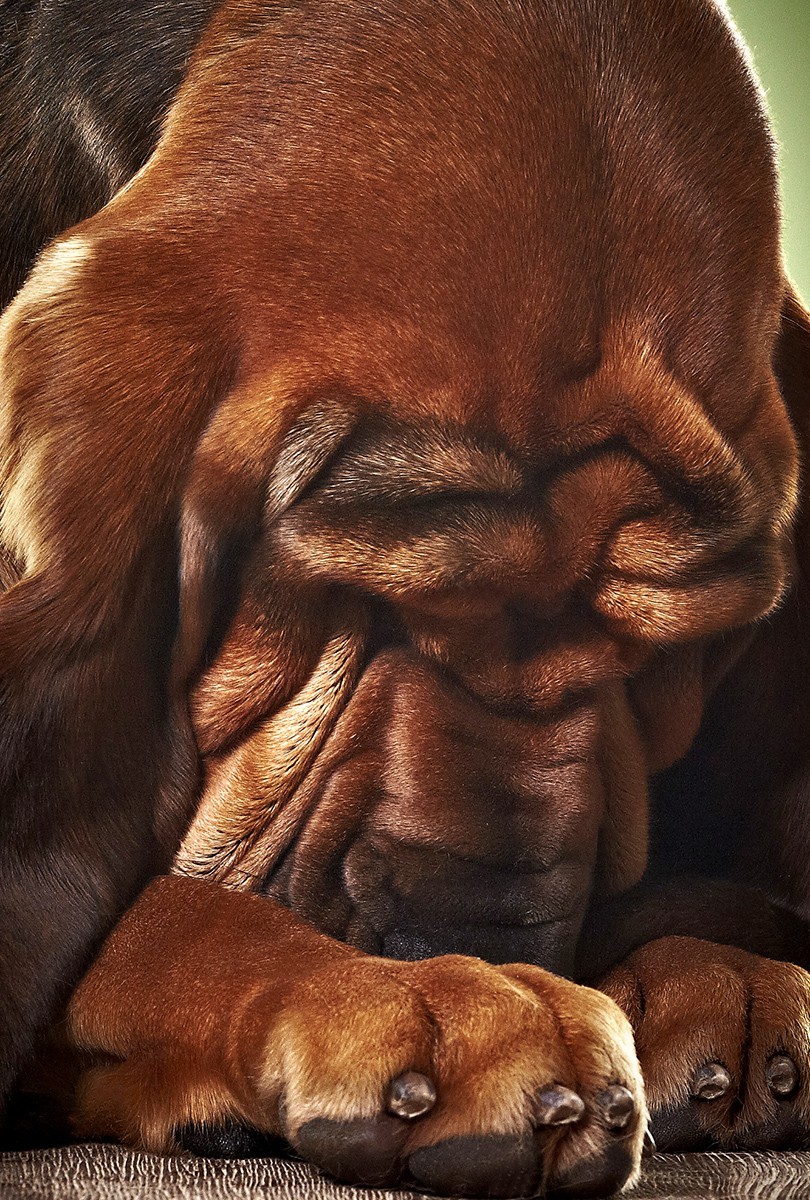 Think bloodhound and the image of a dog with its nose to the ground following a scent immediately comes to mind. You think of police departments and crimes solved thanks to a dog’s nose. And those images are of a working dog that does its thing when called on and then, maybe, quietly waits somewhere to be called on again. Bloodhounds are so much more than that. They make great family pets and are active outdoor-loving dogs.

They are also fun to show. My husband always wanted a bloodhound. He looked for one back in 1980, but that resulted in us getting a basset hound. Fast forward several years to when the kids are grown and we are living on a ranch in Elbert County, northeast of Colorado Springs, and my husband is even more determined to get a bloodhound. Many who are only familiar with the television image of a bloodhound with its nose to the ground ask why a bloodhound? Think about it. Bloodhounds are big.

The females can be about 90 pounds or more and 24 to 25 inches at the shoulder. Males weigh up to 135 pounds and can be 29 inches at the shoulder. At that size, their tails are perfectly able to knock any glass off a coffee table or break a glass cabinet door. And they eat a lot, at least twice a day. And there is their nose. It will drive them to the kitchen counter where they can easily snag any unguarded meal. And, oh yeah, there is that drool. A bloodhound does drool all of the time and when the dog shakes its head, the drool flies everywhere. With that type of information, who would consider a bloodhound? 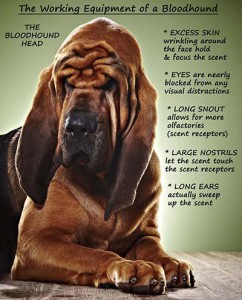 Once you meet a bloodhound, you understand, especially if you are a big-dog person (meaning a person who likes large dogs). How can you not like this dog that goes from noble and dignified one minute to a total comic character the next? For me, and others, it’s a “touchy-feely” thing. I touched a bloodhound and I liked it — the soft excess skin and those lovely long ears. And then when you rub its ears, it doggie purrs like a kitten. (It’s not really a purr; it’s more like a grumbly-rumbly moan.) We were ready for a bloodhound. We have always had and loved dogs, so we were prepared for all of the ways life changes when you add a puppy or dog to your family.

But who knew we could be so taken with this one breed of dog. We became totally hooked on bloodhounds once we finally got one. Why is that? Sometimes the best way to explain bloodhound personalities, traits and behaviors is to tell people about our particular bloodhounds, so here goes. Our first bloodhound was Marshall. Sadly he only lived about two years, as he had some health problems. But he was an affectionate bloodhound even though he was rather scrawny compared to the American Kennel Club’s bloodhound standard for the breed. After Marshall we got Hunter and Sassy. Our older male, Hunter, is absolutely the smartest dog we have ever had.

He is a bloodhound with high problem-solving abilities. For example, gate latches and doorknobs were problems for him. They kept him in or out. So, he studied them until he figured out the gate latch is pushed up to open the gate and lever door handles are pushed down to open doors. Needless to say we had to change our gate latches and our door handles to make them dog proof. Hunter is a true ranch dog, often spending his days with my husband, riding in the tractor and checking fences and animals.

He is a bloodhound that does not allow animal intruders. If there are coyotes or foxes, he is not happy until they are chased off. And snakes are also not allowed. He will corner any snake and bellow his distinctive bloodhound bay until the snake is removed from “his” yard. Hunter is a wonderful bloodhound; but he is an example that not every dog you love should be bred. Hunter lacks some breed type characteristics and more importantly he lacks a good health history.

So Hunter is happily neutered and living the good life at our Bloodhound Ranch. Our female bloodhound is Sassy. She is the most squishy and loveable dog anyone could have ever imagined. She is living therapy for us each day, bringing us nothing but love and joy. Okay if I am honest, she is also a huge attention hog and rather possessive of all doggie toys. Yes, she is a spoiled dog. She is a large female bloodhound, with good bone and substance, and she is “dripping with type,” meaning she is a good breed type with long ears, aSubmitbundant skin and, well, drippy skin.

A well-rounded bloodhound, Sassy is an American Kennel Club and international champion, with her Canine Good Citizen designation, a Rally title and a trailing title. She is working on her obedience title. She is also temperament tested and approved for therapy work. But above all Sassy is an adored family pet. Bloodhounds can be sensitive, and Sassy is a good example of that. She has a great nose with an aversion to smelling dead things. This makes her great in discerning dead things, but her sensitive nature makes it something we don’t want her to have to do regularly.

A true Sassy story: While traveling with Sassy through Texas, I stopped at a hotel/motel, which was something we had done quite often. It was just one night and, of course, I had to allow Sassy potty time. As I walked her, I did not understand Sassy’s behavior. She refused to walk in a certain area or by a parked truck and trailer. I was actually a little frustrated, thinking, “Come on; what’s the big deal?” The next morning while I was checking out of the hotel, I heard the night clerk exchanging information with the day clerk.

The first clerk said something about a strange client who checked in last night. Apparently, he was transporting a dead body. Yep, this was the truck and trailer Sassy refused to be around. From that day forward I was a better bloodhound owner as I understood that there are things that bloodhounds (all dogs really) smell and know that people just don’t understand.

We also have a young bloodhound male, Sebastian. He is pretty much a regular at the Colorado dog shows, and he has some big paws to fill with a famous half-sister, Kiss, who is the number one bloodhound in the country. Sebastian has a marvelous example of a bloodhound head, which is narrow in proportion to its length and has a visible occipital peak (the little top knot bump on a bloodhound’s head). Of course, a bloodhound head is an instrument for scenting.

The long ears sweep the scent up and toward the large nose and nostrils while the excess skin holds the scent near. Even the drool of a bloodhound enhances any scents the bloodhound picks up. Bloodhounds were bred and designed to be scenting and trailing dogs, so a working bloodhound could be required to follow a trail for a good portion of a day.

Therefore, besides needing a good bloodhound head, bloodhounds need a good heart and good lungs. They also need good legs and feet. Sebastian has all of these characteristics and good bone, good musculature and wonderfully “knuckled up” feet. He spends many of his days on the move, running and chasing birds, butterflies and even bees so he seems to have a good heart and lungs. But how do we really know if our dogs have healthy hearts? We have them tested, relying on a veterinary cardiologist who gives our bloodhounds echocardiograms. Bloodhounds should also have their hips and elbows tested. An X-ray should be taken and sent in for evaluation and certification.

There are many other optional tests for bloodhounds, but the basic health testing requirements cover heart, hips and elbows. A healthy dog will be a happy dog. As a big dog, a bloodhound will also do best with a large yard and a good strong fence. It is a breed that is perfect for where we live now at what has become Bloodhound Ranch. Marlene Groves is a retired business consultant and a member of several dog clubs.

She is a current board member for the South Central Bloodhound Club and the treasurer for the Colorado Federation of Dog Clubs. She and her husband raise buffalo, but they also have a passion for their bloodhounds. Learn more at www.bloodhoundranch.com.