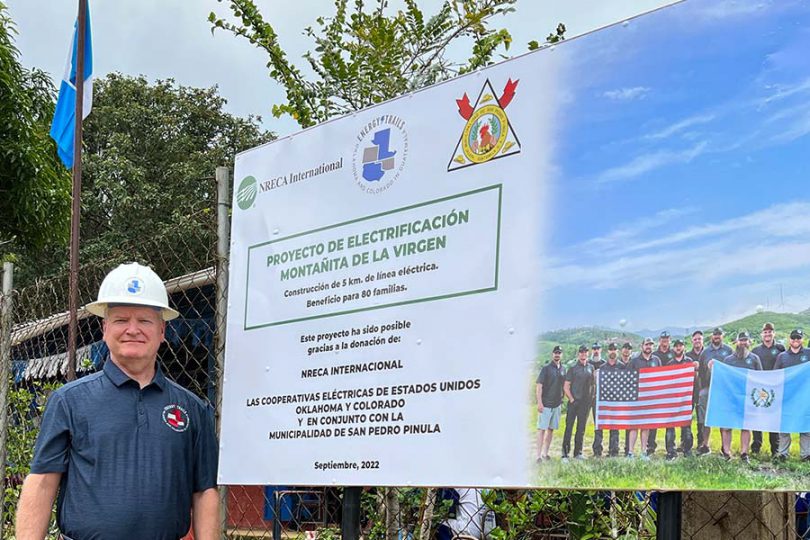 This was our third trip to Guatemala with the “Energy Trails” team, a collaboration between the Oklahoma Electric Cooperative Association, CREA and NRECA International, the philanthropic arm of our national trade association that sponsors electrification projects around the world.

Over the course of three weeks, the linemen from Colorado and Oklahoma worked long hours in difficult terrain to build the electric system and install the meters, light fixtures, switches and outlets for 81 homes, two churches and a school. Given the remote worksite, all of the work was done without the benefit of bucket trucks and other equipment that is typically used by utility line crews. Instead, the linemen used old-fashioned hand tools, pickup trucks and a lot of ingenuity.

Members of the La Montanita community were also instrumental in completing the project. Before the co-op teams arrived, many of the poles needed for the project were already set (into hand-dug holes) and much of the right of way had been cleared. Whenever the crews needed help pulling lines across ravines or climbing trees to cut down branches with machetes, the villagers were quick to provide the necessary assistance. The contributions of the people who will benefit from these projects has always been critical to the success of the international program, and this project was no exception.

Once the project was completed, the villagers came together for a day-long celebration. I was privileged to join the inauguration team from Colorado and Oklahoma for the “lighting” ceremony, in this case held in the community school.

What a joyous occasion! I could not help but think about the many times a similar ceremony took place in rural communities across the United States in the 1930s and 1940s as the result of the electric co-op program.

The celebration continued with the children of the village singing the Guatemalan national anthem, reading poetry, performing traditional dances and pom-pom routines, and hosting us for lunch. We also heard speeches from local officials, including the mayor of the village and surrounding areas. Mayor Robert Ramirez Guerra could have been speaking about rural electrification in the United States when he said that electricity is essential to modern life and that it’s a basic human need. It was also gratifying to hear him say “God bless America” as he recognized the efforts of the electric co-ops of Colorado and Oklahoma to improve the quality of life of our neighbors to the south.

It’s hard to believe that in the year 2022 there are still millions of people around the world who do not have access to electricity, but that’s the reality. While Colorado’s electric co-ops are primarily concerned with serving Colorado residents, we believe we have an obligation to help others as well. We’re so grateful to everyone who has contributed to this cause and supported our linemen who do this work.

One closing note about those linemen. After arriving at the Houston airport on the trip home from Guatemala, the linemen prepared to go their separate ways back to Oklahoma and Colorado. As they parted, it was clear that during their time in Guatemala they became true brothers. I must admit I got a little misty-eyed seeing these tough, fearless men hug each other and pledge to stay in touch in the years to come.

So, while we hope this project provides long-lasting benefits to the people of La Montanita de la Virgen, we know that it also created a lifetime of memories for Colorado electric co-op linemen.