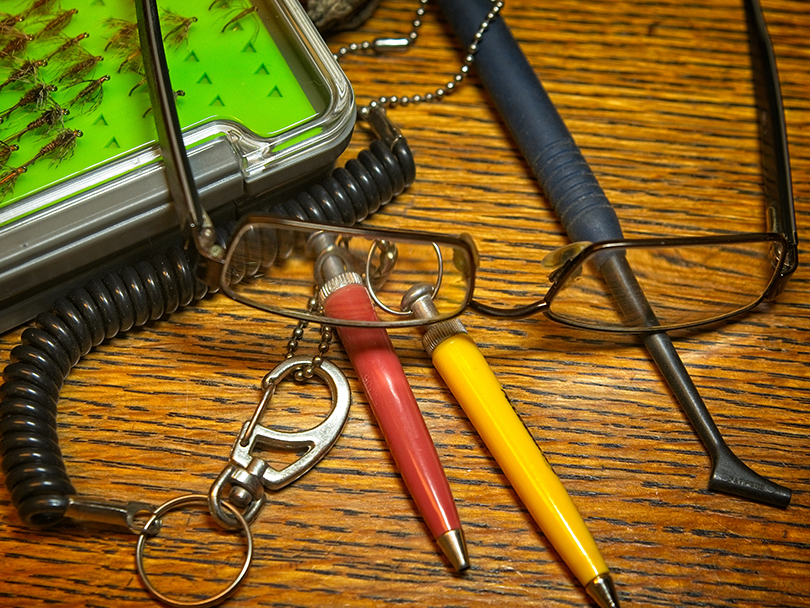 Every fly fisherman I’ve ever known has wrestled with “heavy vest syndrome” at one time or another. Me, too. I used to carry an inventory of accessories, gear and gadgets capable of covering any possible angling eventuality up to and including a fly-fishing expedition to the Dark Continent. For a while there I had so much stuff crammed into and dangling from my vest that I sounded like a junkyard coming down the trail.

I didn’t mind the weight of the thing so much as the thought of having to paw through all that clutter to look for something I really needed and couldn’t find. At some point I finally had to admit that (1) fly-fishing the Dark Continent wasn’t even a remote possibility, and (2) I seldom used half the stuff I was hauling around, like the small binocular, the magnifying glass with tubular vials for collecting insects, the first-aid kit, the folding drinking cup and so on.

In the process of determining what I absolutely could not live without for a day on the stream, a few items distinguished themselves — not only for being useful angling accessories in their own right, but also for being superior ones at that. Three of them stood out: a Ty-Rite tool, a Ketchum Release hook disgorger and a pair of 3X magnifying glasses. I’ve used all them for years now and can honestly say I’d panic without them.

The Ty-Rite tool looks like a sawed-off ballpoint pen. A small, spring-steel hook pops out the tip instead of a pen point. It holds your fly while you thread the eye with tippet and then, with a few twists of the barrel, ties a perfect clinch knot. It’s the essence of simplicity in both design and function, and is definitely easier to hold a tiny fly with than my frozen, zucchini-sized fingers. It has the added benefit of preventing dropped flies. I keep it on a retractor pinned to my vest where it’s handy but out of the way.

The Ketchum Release hook remover is simply the best device I’ve ever used for that chore, though I probably wouldn’t have known that if I hadn’t found one on the stream one day. I’d like to thank the guy who dropped it. Two features distinguish it from all the other hook removal tools I’ve tried: You don’t have to handle fish to release them with the Ketchum, and it doesn’t mutilate flies — or fish lips — the way hemostats can. OK, that’s technically three things. Regardless, it’s a keeper.

The 3X magnifying glasses are indispensable for changing flies, tying knots, picking tangles out of line and leaders, examining captured insects up close and a hundred other daily fly-fishing tasks that require up-close visual acuity. They cost about 10 bucks, but they’re worth 10 times that.