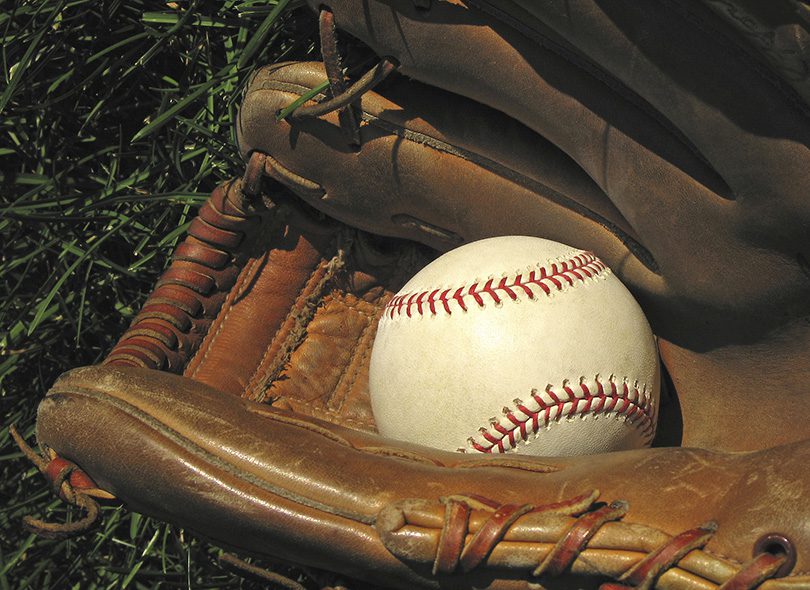 Grand Junction has long been a baseball town. Signed bats and balls are displayed in residents’ homes; special jerseys are pulled out of closets for specific games; and doors are opened to players who come to town to play the game they all love.

Baseball memorabilia fill the walls of the Romer home.

The home of Linda Romer Todd and her husband, Buzz Washington, is one that prominently displays a variety of baseball memorabilia. A dozen framed and autographed photographs of Todd’s favorite major league players cover an entire wall.

Another wall is dedicated to their hometown team, the Grand Junction Rockies, a minor league affiliate of the Colorado Rockies. Two dozen signed baseballs and numerous bats and baseball caps from team members take up the space. Their granddaughter, Todd says, has a jersey from a Junior College (JUCO) Baseball World Series player. Apparently, a love of baseball runs in the family. 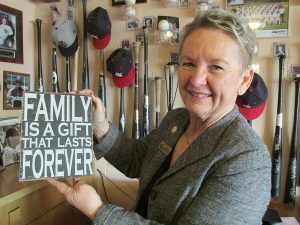 Dick and Charlie Monfort, principal owners of the GJ Rockies, bought the baseball franchise in 2011, when it was located in Casper, Wyoming, and the team was called the Casper Ghosts. The following year, the owners moved the team to its current home and renamed the organization the Grand Junction Rockies.

“A lot of municipalities were interested in securing the minor league enterprise,” says GJ Rockies General Manager Tim Ray. “The owners knew when they bought it they eventually wanted to move the franchise to Colorado. Number one on their list was Grand Junction because of the history of baseball here, set by JUCO. Our community takes a tremendous amount of pride hosting the JUCO tournament.”

The Junior College Baseball World Series came to Grand Junction in 1959, a year after JUCO’s first-ever tournament, which took place in Oklahoma. The athletic director of what was then Mesa College was at that game and was determined to bring JUCO to Grand Junction, Ray says. He and the college’s baseball coach, plus Dale Hollingsworth, former executive director of the Grand Junction Chamber of Commerce, succeeded in putting together a winning bid to host JUCO. The tournament has been held in Grand Junction ever since. 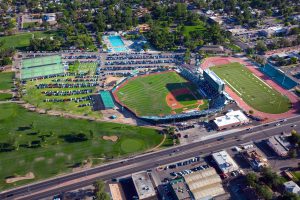 “It made $157 profit that first year,” says Jamie Hamilton, JUCO chairman and chief executive officer of Home Loan Insurance Company in Grand Junction. “Last year cash flow (was) about $310,000.” Hamilton played professionally with the California Angels before returning to Grand Junction in 1981, where he coached Mesa College baseball for four years and co-directed JUCO.

Linda Romer Todd and her husband buy season tickets each year to the GJ Rockies — whose season spans the summer — and the Alpine Bank-sponsored JUCO games, a week-long tournament that starts Memorial Day.

Referred to as the short season rookie team, the GJ Rockies play at the first level of professional baseball in Colorado. Players advance from there to Class A, High A, Double A and Triple A leagues, with the goal of eventually playing for the Colorado Rockies major league team. It is a journey that typically takes three to five years, Ray says.

The GJ Rockies will kick off its 2016 season at home June 17, when it competes against the Orem Owlz, a minor league affiliate of the Los Angeles Angels. The 76-game season wraps up September 8, followed by about three weeks of playoffs. 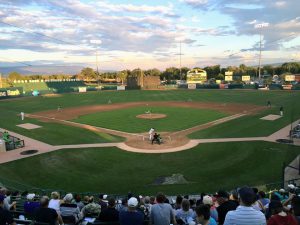 The view of Suplizio Field from the stands.

When the minor league team arrived in Grand Junction in 2012, the organization sought community members to host both the players and coaches for the season. Todd immediately volunteered her home and was assigned former GJ Rockies Manager Tony Diaz, who was later named development supervisor. She and her husband are looking forward to their fifth summer of hosting Diaz.

“We’ve become like family,” Todd says. “I get Christmas, Thanksgiving and happy Mother’s Day calls from wherever he is” — even when he’s in the Dominican Republic visiting his mother.

Approximately 20 Grand Valley families open their homes to the young men who come from all over the country to play baseball for the summer. Strong bonds are formed between players and their host families, many of whom end up following the players throughout their careers.

Carma Brown and Eddie Butler at a game during his 2012 rookie year with the Grand Junction Rockies.

Carma Brown says she never expected to become a baseball mom after her own kids grew up and moved out. She laughs when she tells how she initially declined when asked to host a GJ Rockies player for the season. Brown and her husband, Nick, had recently became empty nesters.

However, after repeated requests, Brown reconsidered. She consulted her husband who surprised her with his reply: “Baseball has been good for our family, with our boys. If these kids need help, of course they can live here.”

They agreed to take in two players that first summer four years ago. A week later a representative of player development for the Colorado Rockies called, asking, “Our first round draft player is coming to Grand Junction. Can he live with you? You’re the perfect fit for him.” That’s how the Browns ended up with three players that summer and every year since.

One of these rookies was Eddie Butler, who has 19 starts in the major leagues with the Colorado Rockies. “We’re still really close, four years later,” Brown says, who beams when she talks about any of the players she’s hosted, all of whom she considers like family. “We were there when Eddie made his debut in the big league two years ago when he pitched against the Los Angeles Dodgers. It’s so fun when kids get moved up because we know them.”

Four of the 10 players the Browns hosted over the years were in spring training in Scottsdale, Arizona, this year. “We try and go to spring training every year to see all the boys,” Brown says.

Brown, a personal insurance manager for Home Loan Insurance, met Butler and his girlfriend in Scottsdale for several days recently when she went there for work. In October, she’s planning to travel to South Carolina to attend the wedding of another former GJ Rockies player and houseguest.

While host families are not paid, the baseball franchise provides the players’ lunch before the games and dinner afterward — which helps keep host families’ food costs down. “We do it for the love of baseball and kids,” Brown says. Even players like Butler, who end up with a big signing bonus, “at home, they’re just another kid,” she says.

Several former baseball players found their way back to Grand Junction after playing in the JUCO tournament and other summer leagues. Suplizio Field in Stocker Stadium, where both the GJ Rockies and JUCO games take place, was named for Sam Suplizio, who played for the former Grand Junction Eagles team, before being drafted by the New York Yankees. When an arm injury cut his career short, the Pennsylvania native returned to Grand Junction and immediately became involved with JUCO.

Andy Weaver is a former JUCO player, originally from Kansas, who also decided to make Grand Junction his home. At a JUCO banquet before the start of the 1994 tournament, Weaver noticed a pretty blonde waitress who was serving the table where he was seated. He ultimately asked her to dinner, and she came to the games to root for his team. Although Weaver’s team lost that year, he won a girlfriend. The couple conducted a long-distance relationship for the next two years while he played minor league baseball around the country.

“JUCO has given me an amazing wife and four great kids,” says Weaver, who currently serves on the JUCO committee. “Our boys have been very active in baseball.” 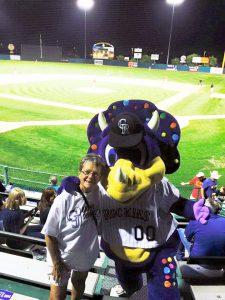 More than 100,000 spectators attend the JUCO tournament, Weaver says. “The economic impact is great for our community. We can showcase what western Colorado life is like.”

The all-volunteer JUCO committee comprised of 80-plus community members, presented Grand Junction City Council with $800,000 toward the remodel of Stocker Stadium and $30,000 for a new scoreboard. JUCO also financially contributed to the Tower, a multiuser complex at the stadium, serving sports and civic audiences.

JUCO proceeds have provided $50,000 in scholarships to local students to further their education, and $250,000 for Colorado Mesa University’s clubhouse. Additionally, JUCO funded dugouts at Grand Junction High School and a scoreboard for Grand Mesa Little League.

In 2013, the GJ Rockies won the national John Henry Moss Community Service Award. Only one out of 160 teams across the nation receives the award each year. “It signifies our ownership is very committed to the community of Grand Junction in terms of time, energy and resources,” Ray says.

Todd says she prefers watching JUCO and GJ Rockies games to major league baseball because of the closeness between players and community members. “At JUCO and Rockies levels, you can still touch the players,” she says. “It’s fun watching players from both the Rockies and JUCO go down on their knees to talk to a child. It’s pretty special.”

Local Little Leaguers accompany their adult minor league counterparts onto the field to sing the national anthem before the GJ Rockies games.

Local teenagers are hired to be batboys for the season. 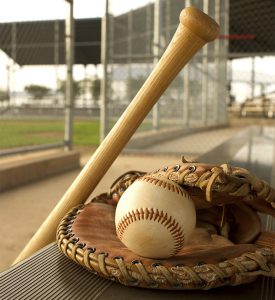 GJ Rockies’ new president, Joe Kubly, says his goal is to provide a family friendly atmosphere that’s affordable, and where fans will leave with a smile at the end of the day.

And, with that, a town can enjoy the summer filled with the game it loves.

Freelance writer Sharon Sullivan is based in Grand Junction and enjoys exploring what makes the Grand Valley the special and unique place it is. Her work appears in several Western Slope publications and now in Colorado Country Life.