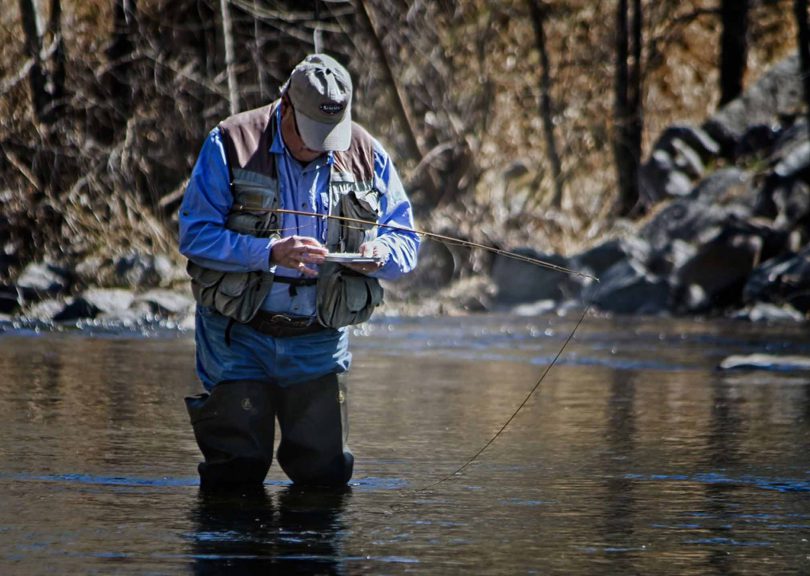 I’m not a winter fly fishing fan, but several years ago during one of those pleasantly weird, weeklong February thaws we sometimes get around here, I found myself on the Big Thompson with a fly rod in my hand. The weather was so inviting I couldn’t help myself, so I grabbed my rod, waders and vest and headed for the river to see if I could catch a trout or two.

I parked just west of the Dam Store to string up my rod and pull on my waders. Flows here are usually too low to hold fish during the winter months, but occasionally a good head of water will be coming downriver and, if it holds for more than a few days, trout will mysteriously begin to appear in the long, flat pool there. Where they come from is anybody’s guess.

I couldn’t tell you why, but they were in there thick as fleas on a boar ’coon that day. Clouds of midges were boiling out of the riffle at the head of the pool and the trout were on them like sharks on a school of wounded tuna. Naturally, I figured catching them would be as easy as shooting fish in a barrel.

I tied on a Griffith’s Gnat (a tiny dry fly known to fool trout during midge hatches like this one) and crept down the bank. I began casting, and immediately proceeded to not catch fish. An hour and several fly changes later, I still hadn’t hooked so much as a single trout.

I’ll spare you the ugly details, but it wasn’t until after I’d spent the next two days there that I finally figured out those fish weren’t feeding on the winged adults after all. They were singling out those insects that had partially hatched and lay trapped beneath the surface, struggling to free themselves from their pupal cases. Experienced anglers can identify these partially hatched insects and know how to mimic them with their flies. Trout apparently find them easier to catch than winged adults and will feed on them to the exclusion of all others.

I mention this because we’ll probably have one of those weird February thaws again next month and a bunch of you will be headed out to fish the midge hatches. I don’t want you to think that, just because the weather’s nice and the trout are jumping all over the place, catching them is going to be as easy as shooting fish in a barrel. It may not be.