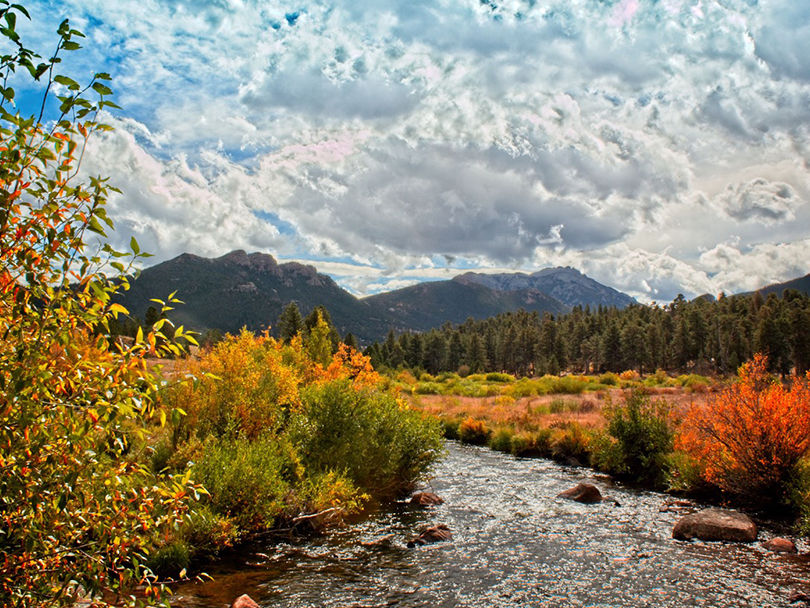 I had to pick a favorite month to fly fish, it’d probably be September. The woods, the weather and the streams are all golden — in every possible way. Brook trout are in full spawning dress and the mountain creeks are as pretty as they’ll ever be, reflecting as they do the orange, red and yellow colors of autumn. I’m one of those small-stream brook trout junkies who gets his jollies sneaking around backcountry creeks with a light fly rod, a small box of flies and the gleeful expectations of a 12 year old.

Autumn brook trout do that to me; I’m not sure why. I suspect it’s because you can almost always count on brook trout to take your fly, even when no bugs are hatching or your casting’s a little on the sloppy side. Rainbows and browns aren’t nearly as predictable.

Last September, I was fishing a small creek in the Mummy Range where the alder clumps grew right over the stream. Casting, at least in the classic sense, was out of the question and in some places reduced to feeding a few coils of slack line downstream under the bushes to get a decent float. It wasn’t pretty, but it was effective. I caught a few nice brookies doing that, but I grew itchy for some casting room, so I reeled in and headed upstream.

I came to a long, open stretch with a deeply undercut bank on one side, and a big, gnarly fir sweeper piled up in it at the end of the riffle. The water ran dark and deep against the fallen tree and a frothy gob of foam swirled in the eddy at its base. It couldn’t have been more obvious this was the home of a big trout if there’d been a sign with its name on it and an arrow pointing at the eddy saying, “Cast Here.”

But I overshot the cast, and my leader wrapped itself around one of those hairy fir branches leaving my fly to dangle and bounce in the current above the black hole. Of course, you know what happened next: A fish rose from beneath the tree and grabbed the fly. Only instead of the big, old brook trout I imagined, it turned out be a dinky little thing about as long as my ring finger. He hooked himself and hung there thrashing helplessly. I was about to wade in and release him when a big brown trout slid like a barracuda from under the cut bank, snatched the dancing brookie from the limb and disappeared back under the foam. Fish, fly, leader and about 10 inches of fir twig went with him. I guess I’m not the only one who likes September brookies.