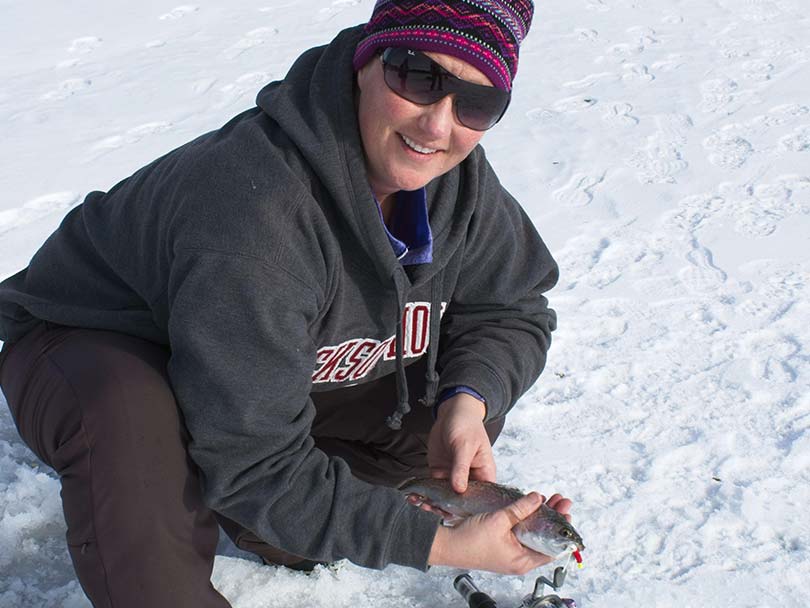 1. They’re usually chock full of fat, sassy trout
2. We seldom get fishable ice down here along the Front Range.

There’s a lot to be said for ice fishing the flatland lakes, though. First off, you’re more likely to catch warm-water species like crappie, perch, bluegill, bass or walleye than you are trout. And when it comes to pan-fried fillets, there’s not a trout that swims that can match any of those for taste and texture. Wild brookies on the grill, maybe.

Then of course, there’s the advantage of fishing locally. Drive time is negligible and, given the cost of fuel these days, the savings can be considerable. Not to mention you could be fishing instead of driving for three hours before you so much as get your auger wet. Over the years, I’ve learned that time on the water usually results in far more fish caught — and fun had — than an equivalent amount of time spent behind a windshield. In other words, the quicker you can get your line in the water, the more likely you are to catch a fish.

Still, there are some who crave the adventure and lure of the open road and a chance to see some place different for a change. They couldn’t care less how long it takes to get there or what they catch so long as they get away to the great white north.

On the other hand, for those folks who crave action, two of the Red Feather Lakes — Dowdy and West Lake — are about as reliable as a frozen lake can be. They’re full of eager 12- to 14-inch rainbows. Of course, there’s always the chance you’ll hook a 3- or 4- pounder there, too, but I wouldn’t bet the beer money on it.

I fished up there a week ago with family and friends, and we hooked more trout than we knew what to do with. We thought about bringing some home for the smoker, but released them to catch another time. Douglas Lake in Wellington is another productive Front Range Lake and, while you’ll most likely hook rainbows there, you could just as easily luck into a school of yellow perch.

Regardless of where you ice fish this year, be safe, not sorry. Obey the ice safety rules. Don’t go alone. Bring a throw rope, ice awls and your brain. A cellphone can be used to dial 911 in case of emergency. Ice fishing is a lot more fun when you get to make the trip back home, whether it’s 4 minutes away or 4 hours.