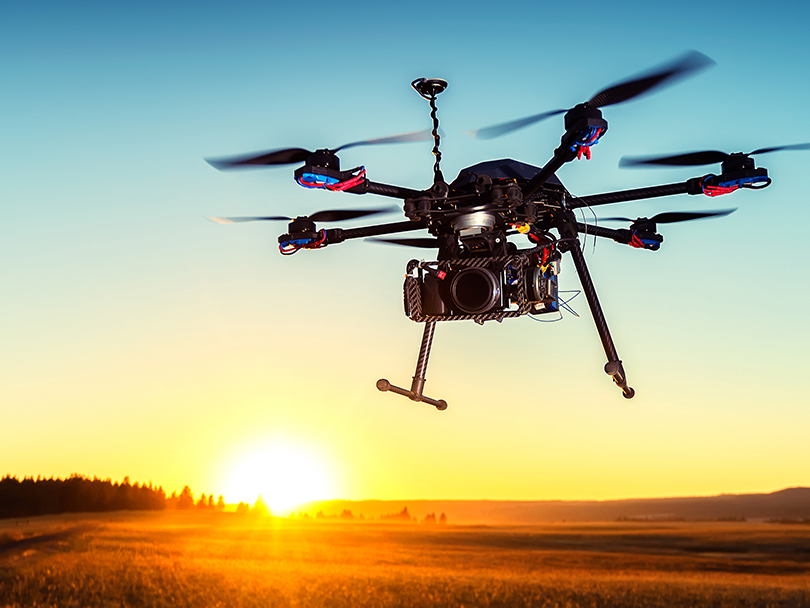 By Tom Tate
When electric cooperatives were formed in the 1930s, their technology was primitive by any standard — digging holes for the utility poles by hand, walking the poles up into those holes, using ladders to reach equipment needing service. And if you had to get in touch with the line crew, face-to-face communication was the only option.

Today, the lineworker rivals any other worker when it comes to having the necessary tech to get the job done safely, quickly and more accurately. Let’s take a look at a few of the devices behind this evolution, starting with the tablet.

Many electric co-ops send their crews into the field with ruggedized tablets. What are those? They are tablets (and smartphones) with special cases and screen protectors built to tough specifications that will allow a lineworker’s devices to survive bouncing along in a line truck, being exposed to all kinds of weather and being dropped into a bucket or toolbox.

Depending on the electric co-op, the data and other content on these ruggedized devices varies. Often work orders detailing the day’s project are found on these devices. These can include construction drawings for how the job is to be built, the bill of materials so the crew knows what to pull from inventory before hitting the road, and system maps so lineworkers know exactly where to go. Gone are the reams of paper and cumbersome map books of the past.

Not quite as new, but equally important, are global positioning system, or GPS, coordinates. This functionality might be built into the lineworker’s tablet, a ruggedized smartphone or a handheld unit. As more co-ops map their systems using GPS coordinates, the GPS capability gets the crews where they need to be in an efficient manner. Some GPS units are designed specifically for heavy trucks, and plot routes that avoid bridges with weight limits or roads with height restrictions. 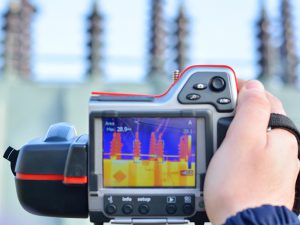 Infrared cameras help lineworkers scan power lines and other equipment and find hot spots that could mean equipment that could fail.

Another popular tool is the forward-looking infrared camera, also known as FLIR. Many people are familiar with this technology from the many ghost hunter programs currently on television. With a FLIR camera, crews can rapidly scan power lines, transformers and other equipment when searching for hot spots. A piece of distribution equipment about to fail will often get hot. While not visible to the naked eye, it shows up clearly on a FLIR display. Scanning the system with a FLIR camera is a fast and accurate means of spotting a problem before it becomes an outage.

And today, many lineworkers have eyes in the sky in the form of drones. Colorado’s electric cooperatives cover territory that is often difficult to access when they need to survey the system for necessary repairs or to locate a new power line route. Instead of tackling the job on foot or on four-wheelers, the co-op crews might be able to send in a drone. Flying above the area provides a great view of the situation and allows the crew to make an assessment of what to do next without having to be there in person. This is especially useful after a major storm when roads can still be blocked.

Cooperatives are laser focused on providing the best reliability possible at the lowest possible price. A major aspect of reliability is getting the lights back on as quickly as is safely possible after an outage. Key in this is the outage management system, or OMS. This system builds on “geo-tagged” system maps (each pole has its GPS location mapped), sophisticated engineering models of the distribution system and, for maximum accuracy, an advanced metering system.

When an outage occurs, the system uses models and databases to determine the exact location of the fault and the extent of the outage. Crews can then be sent to the right spot to correct the problem. Part of this restoration effort might be a vehicle tracking system that tells operations staff the exact location of each line truck. The crews closest to the outage are sent to restore power — and essential information can be accessed on the tablets, depending upon the situation.

Sometimes all the technology in the world is not enough and a good old-fashioned visual inspection is required. During daylight hours, it can be easier to see the cause of a problem. But at night, lineworkers need a reliable source of light. Today, that comes from LED flashlights and truck-mounted lights. These powerhouses are a fraction of the size of regular flashlights, and they make an older incandescent model look like a candle by comparison. In the hands of a lineman, they provide an amazing view of the lines during the darkest of nights.

Technology is permeating every aspect of cooperative operations, allowing your electric co-op to constantly improve your service. The well-connected lineworker is at the forefront of that technical evolution.

Tom Tate of writes on the electric industry for the National Rural Electric Cooperative Association.