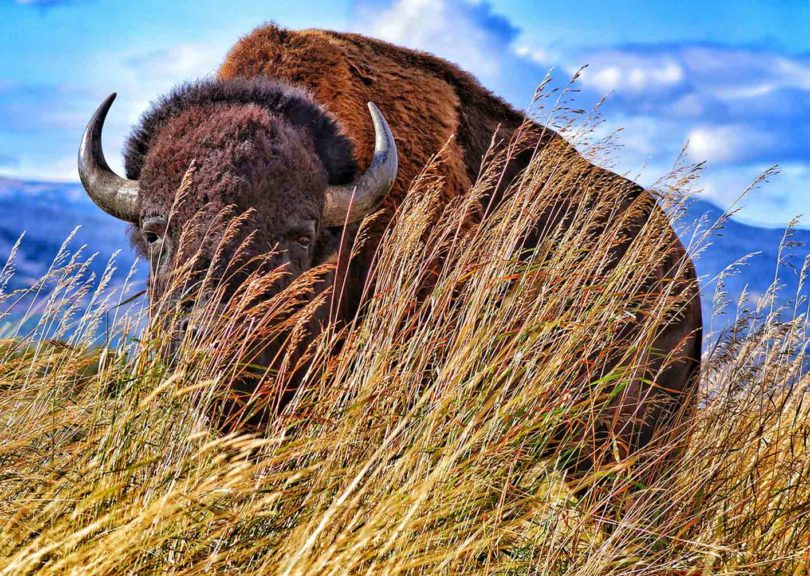 Reindeer are not the only non-traditional animals being raised on Colorado ranches. At the 3,000-acre, family-owned Lucky 8 Ranch in southern Routt County, more visitors come for ATV or snowmobile educational rides to see an iconic American animal in Colorado’s bison country than for an adrenaline rush ride.

Winter and summer visitors to Lucky 8 Ranch can drive on guided off-road tours through an American bison herd while exploring scenic rural Colorado.

“Bison are majestic and beautiful, but you just have to respect their space,” said ranch owner Dwayne Osadchuk, whose son Nick manages the ranch. The ranch operation has grown to 400 head of bison in eight years and is one of about dozen bison ranches in Colorado that offer tours.

Colorado is home to more than 50 bison operations from Kremmling to Kiowa to Pueblo that combined raise an estimated 10,000 head of bison, said Karen Conley, communications director for the nonprofit National Bison Association headquartered in Westminster.

Colorado ranks sixth in U.S. states for number of bison behind top-ranking South Dakota then Nebraska, Montana, Idaho and North Dakota. An estimated 250,000 bison live across the U.S. on ranches, parks or preserves, according to Conley.

In May 2016, the American bison was named the U.S. national mammal. According to the National Park Service, the American bison is the largest land mammal in North America with bulls weighing up to 2,000 pounds and cows up to 1,000 pounds. Yet bison can run up to 35 miles per hour, pivot quickly, jump tall fences and are strong swimmers.

The bison ranching industry has endured challenges such as drought, attrition of older ranchers and changing consumer buying habits and restaurant closures during the COVID-19 pandemic, yet the demand for and wholesale pricing for the lean meat has remained steady with consumer costs on par with grass-fed beef.

Bison rancher John Graves, president of the Denver-based Rocky Mountain Bison Association, a division of the National Bison Association, describes the “bison advantage” compared to cattle ranching. The larger bison produce more meat and are less labor intensive. Bison will eat a wider range of plants when foraging, and bison have greater breeding longevity than cattle.

“Bison are very hands off during calving season and are very resistant to a lot of diseases so less vaccinations,” said Graves, who has worked with bison for 15 years. “Bison want to be left alone; they want their space. As long as they remain happy and content with their living situation, with plenty food and water, they are not impossible to handle.”

On the downside for calf production, female bison do not breed until age 2, or generally one year later than cattle. The metabolism of bison slows in the winter, so they need less feed. But the animals also can loose 100 pounds or more over the winter, Graves said.

Conley believes bison are a good fit for Colorado because the animals are an adaptable species that can thrive from the mountain valleys to the eastern prairies. Plus, health-conscious Colorado consumers tend to gravitate to the lean, high protein meat. Bison meat can be found from farmers’ markets to grocery stores, from ranch direct sales to restaurant menus.

Osadchuk said the Lucky 8 Ranch wedding business is growing too, including 13 ceremonies last year, where couples may end up with a few picturesque bison in the background of their keepsake photos.