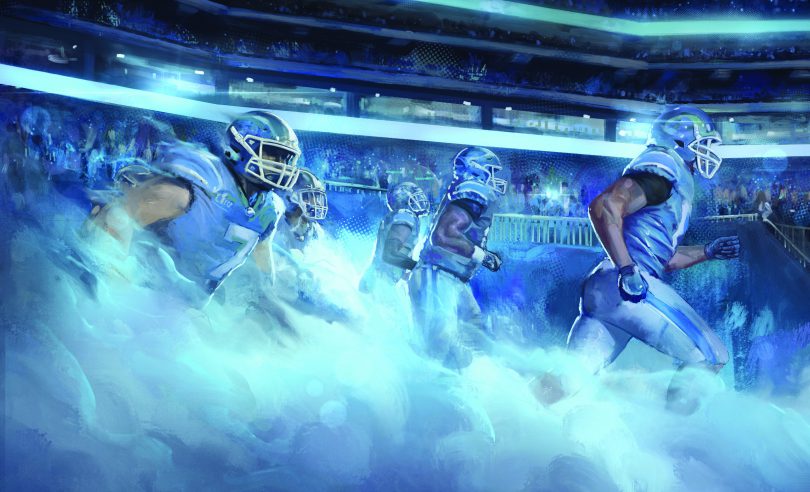 Anyone who has ever watched or attended a major sporting event knows that they involve a lot of people: thousands of spectators, media personnel, athletes, concessions, cleanup crew, security and the list goes on. But you’ve probably never given a second thought about the company that makes the movement and management of all those people possible. In many cases, that company is Populous.

A global organization with a dozen offices around the world, Populous is primarily an architecture firm, working with clients to design and build large-scale projects like convention centers, stadiums, aviation facilities and sports training facilities. The company also does major event planning, all of which is handled by the team in its Colorado office.

“Colorado is a great location for us,” says Jeff Keas, senior principal in Denver and Populous employee for over 20 years. “Our employees like the mountain lifestyle, which helps with recruitment and retention, and the large international airport is essential for flying to project locations. Our employees love living here, which is important.”

Populous planned the Alabama vs. Georgia National Championship at Mercedes-Benz Stadium in Atlanta. It will be the same
stadium with different teams when the Super Bowl kicks off February 3.

Populous has made a name for itself as a company adept at handling massive projects, both in architecture and events. As Keas describes it, “We work on things where there’s going to be large masses of people.” That is a short summary of a long résumé. Populous’ event planning division has played an integral part in all kinds of major sporting events including Super Bowls, college football playoffs, National Hockey League all-star games, Final Four games and the National Football League Draft, to name a few.

“The work of our Denver team is horizontal,” Keas says. “While the other offices work on architectural projects in their locations, we do architecture but we also travel all over the world to do the event planning.”

In addition to its work on major American sporting events, Populous also has a hand in global happenings, partnering with the Olympic committee, managing all European NFL games and even contributing to the operations of the World Cup.

If you ask an employee of Populous why you’ve never heard of such a large and involved company before, they’ll tell you: “That means we’re doing our job well.” According to Keas, seamless contribution is the goal. “If we do our job right, the idea is that people are focused on a great experience, not on the logistics that go into it,” he says.

The scope of those logistics goes far beyond what the average spectator might observe on game day. While the scale and type of work required varies depending on the event, planning always starts months or even years before the event is set to take place. Populous often does legwork for the client, researching, surveying and traveling to find a location that will work for whatever event it is contracted to plan.

In the case of Colorado’s bid* for the 2030 Winter Olympics, for example, Populous conducted surveys in the mountain towns where the Olympic events could potentially take place, to see if the citizens were favorable toward hosting such an event. Populous team members assessed what athletic facilities already exist that could be used in order to determine how much new construction would need to happen. They also offered a plan for the use of the facilities after the games conclude, in order to avoid what they call “white elephants,” or facilities that wouldn’t continue to bring money into the community after the Olympics are over.

Though it insists it can’t say much about it during the evaluation process, Populous is also involved in Denver’s bid to host the NFL Draft. As the draft is usually held in a unique location outside of normal stadium venues, Populous has been assessing places like Red Rocks or downtown as possible settings and determining what changes would need to be made for hosting the draft.

Once a location and time frame are determined, Populous gets to work outlining what needs to be done in order to transform an average event venue into a location that can handle the large number of people attending the special event. The to-do list is long. Populous plans what changes and additions are needed, such as tents, stages, wiring and sound equipment, extra generators, road closures and parking, new entrances and exits to and from the arena, and whatever else the specific venue may need. Populous hires and manages the subcontractors performing the work and oversees the “build-out phase,” when everything is installed in the days leading up to the event. Populous manages the operation of the venue on the day of the event. Then when it’s over, Populous tears it all down, returning the location to the way it was before. 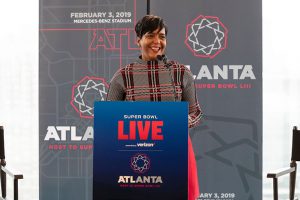 One of Populous’ biggest jobs is, of course, the Super Bowl. The company has worked with the NFL for 35 years now, and though it must continue to bid on their projects every year, its reputation with the NFL means Populous consistently manages the big game.

“It’s a blessing to be invited back on a regular basis,” says Todd Barnes, senior principal in charge of Populous’ NFL contract. “It takes a lot of time and effort, and requires a lot of time on the road, because face time is important with clients, but it means everything for us to be able to meet directly.”

Work on the Super Bowl begins two years prior to the game, almost as soon as the NFL decides where the game is going to be held. Then, as Barnes puts it, “There’s a lot of meetings.” Efforts must be coordinated with the NFL, city authorities, stadium employees, transportation authorities and countless numbers of subcontractors for things like security and construction of temporary facilities.

Mercedes-Benz Stadium in Atlanta, Georgia, prior to construction of all of the temporary game-day installation Populous is planning to channel foot traffic and handle security. Photo courtesy of AMB Sports and Entertainment.

The attention to detail Populous must maintain is simply baffling to those of us who haven’t put too much thought into the necessary changes made to a Super Bowl stadium. Take security fencing, for example

“Fences and barriers must be a certain distance from the stadium building,” Barnes explains, “but sometimes we don’t have that space, so we have to talk to transportation authorities about closing roads. Then we have to coordinate the fence contractor with transportation, and with security that’s going to be managing that fence.”

Another example of Populous’ seamless control can be found in transportation changes. Many attendees might be aware of the expanded parking created for the Super Bowl, but the company also has to make sure there are enough shuttle buses to get people to and from the stadium — a huge task considering the enormous increase in spectators from a typical football game.

Depending on the stadium chosen for the game, often Populous must put on its architecture hat to make temporary changes to things like entrances, exits and security checkpoints in order to accommodate the large number of people attending the Super Bowl. This requires the design and construction of temporary installations to change the usual flow of people in and out of the stadium.

By the summer before the coming game, Populous has mostly completed the planning of stadium changes, temporary buildings, transportation and hospitality. Contractor bidding for construction, security and signage is completed. Signs are another one of those many things most spectators probably never think about that must be handled by Populous.

“We have a sign programmer who has to work with the sign vendor to make over five thousand signs for game day,” Barnes says. Those signs are vital to the safe and steady movement of thousands of people throughout the stadium campus.

After a final production meeting with the NFL in December, Populous starts managing the build-out phase as temporary installations are constructed, traffic is rerouted and signs are installed, along with a list of hundreds of other things that have to get done before February.

Then, game day. Around 90 Populous employees, working on behalf of the NFL, go into what they call “operations mode,” managing facility operations with stadium staff, security, NFL staff and halftime show groups to make America’s biggest sports day of the year go off without a hitch. 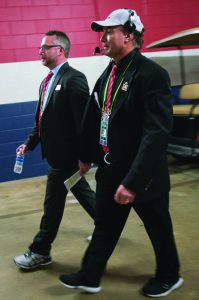 Myron Chase and Todd Barnes (right) of Populous prepare for a game.

“Game day is high drama, high stress and high politics,” Barnes says. “It involves managing what happens on the field, getting things off the field, working with the halftime show and helping them manage their logistics and the timeline of the game.”

Media broadcasting, concessions, spectator movement, parking and security all have to be closely watched for any bumps that may disrupt the experience. All you see from your seat in the stadium or through your television screen is a streamlined entertainment masterpiece, the result of Populous coordinating hundreds of moving parts to work together and make one thrilling, exhilarating event.

After the game, there’s no time to celebrate another successful Super Bowl. The stadium will likely be hosting another event or game soon after, so Populous has to oversee the quick tear-down of all temporary installations, signs, fences and extra equipment. 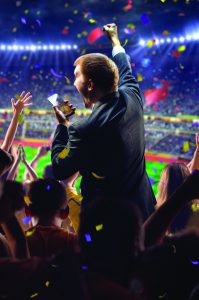 When a confetti shower ends Super Bowl LIII, Populous will make sure all of the colorful paper is picked up.

“We’re the ones that have to get rid of all that confetti on the field,” Barnes explains. Most sports fans just want the colors of their champion team to rain down on the victors; they don’t usually think about the labor-intensive job of removing it from all the nooks and crannies of the stadium. Populous has to think about all of it.

While the most intrusive installations are torn down as quickly as possible, contractors may be at the stadium cleaning up for around three weeks after the big game. By June, Populous will already be in the final planning stages for the next Super Bowl at the next hosting venue.

Though the work is intense, complex and requires a lot of travel and long meetings with clients, Barnes still finds the job rewarding. “At the end of the day, at the end of the game, it’s a blessing that we’re able to provide happiness and joy to all those that are able to watch the game. Even though there might be some sadness on the part of the losing team’s fans,” he says.

As Keas and Barnes both expressed, Populous employees are at their best when they go unnoticed. “The goal is to not be the show, not front and center. The more we can do to stay behind the scenes, our job is for the client to shine; it’s their day and their success,” Barnes says.

But the next time you’re watching the Super Bowl, the Olympics, a Final Four game or any other large sporting event, pay attention to the staggering amount of details managed by Colorado’s Populous employees. They will be there, orchestrating everything behind the scenes, doing their best to make sure you have a great time cheering for your team.

* The 2030 Winter Olympics were awarded to Salt Lake City, Utah, in mid-December, not Denver.

Julie Simpson is a Texan who loves writing about her home state of Colorado.