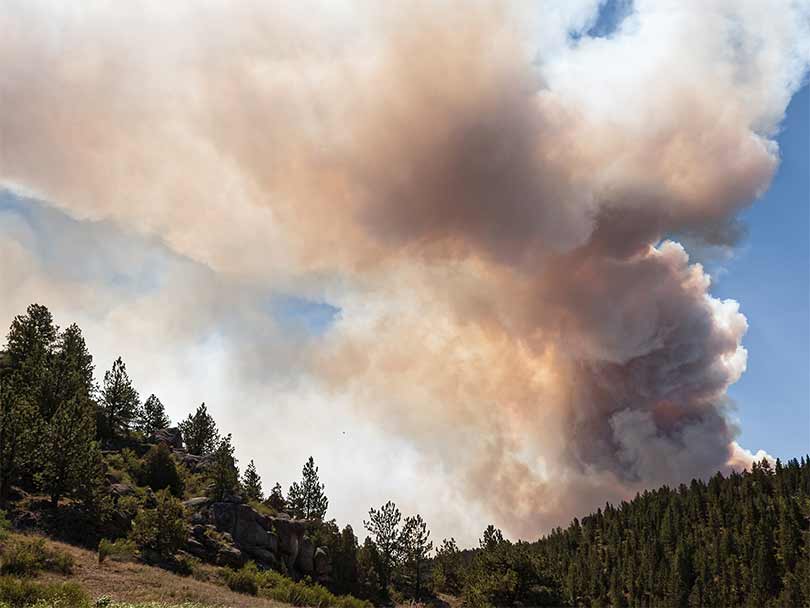 A view of the High Park fire in northern Colorado’s Rocky Mountains.

Among the many challenges facing Colorado’s electric co-ops this summer, the threat of wildfires is near the top of the list. Over the last several years, several thousand acres of co-op service territory have been blackened by wildfires.

This problem, of course, is not limited to Colorado. The fires in northern California in recent years led to the loss of many lives, the destruction of billions of dollars of property and the bankruptcy of one of California’s major electric utilities.

Thankfully, in Colorado there has been no loss of life, but the fires have caused extensive property damage and resulted in lengthy interruptions of electric service. In the case of the 2018 Lake Christine fire near Basalt, only the quick thinking of a utility lineworker prevented the burning of facilities that would have caused a days-long power outage in the Roaring Fork Valley.

Electric co-ops spend a great deal of time and money taking steps to mitigate the risk of wildfires in their service territories. While it’s impossible to limit the lightning strikes that sometimes ignite fires, co-ops do as much as they can to clear the trees near power lines to prevent them from falling into the lines during storms. They also clear the brush and other vegetation under power lines to limit the fuel sources in the case of a downed power line. Co-ops spend millions of dollars annually to clear trees and vegetation to mitigate the risk of wildfires.

This task of “vegetation management” is one that is complicated by many competing interests. Some landowners aren’t excited about the prospect of the co-op cutting down trees on or near their property. While this is understandable, the alternative is drastically worse: the possibility of a “danger tree” falling into power lines and starting a fire. Co-ops work with landowners every day and appreciate the cooperation of their members in mitigating wildfire risks.

Another challenge for electric co-ops is working with federal, state and local government agencies to gain access to co-op rights-of-way across government-owned property. Although most agencies understand that the co-ops must have access to their facilities to clear trees and brush, some have policies that make it difficult for the co-ops to adequately mitigate the risk. Thankfully, at least in the case of the U.S. Forest Service, some new rules have been adopted by the agency that will hopefully streamline the process for gaining access.

Some states have adopted legislation to protect electric utilities in the event that a wildfire causes property damage and the utility is sued. In Colorado, as in most states, the standard of care for electric utilities as it relates to the maintenance of their facilities is not clear. In other words, electric utilities, such as electric co-ops, don’t have clear guidelines to follow with respect to their vegetation management practices. For that reason, CREA will work with the Colorado legislature during the 2021 legislative session to establish some guidelines, which, if followed, would enable co-ops to better defend themselves in the event of a lawsuit. This is an approach that the state of Utah adopted in 2018 and CREA thinks it has merit for consideration in Colorado.

Regardless of whether new legislation is passed, Colorado’s electric co-ops will continue to do what they have done for many years: take all prudent steps to mitigate the risk of wildfires. The good news is that you can play a part as an electric co-op consumer-member. Working with your co-op, you can help mitigate the risks of wildfires by taking steps to protect your property and allowing the co-op access to protect its power lines bringing electricity to you and your neighbors.

In the latest episode of NRECA’s Along Those Lines, NRECA Regulatory Issues Director Janelle Lemen, Dave Markham, CEO of Central Electric Cooperative in Oregon, and the U.S. Forest Service’s Jim Menakis talk about how working together is the best defense when it comes to wildfires: https://www.electric.coop/along-those-lines-how-co-ops-work-with-federal-partners-to-mitigate-wildfire-risks/