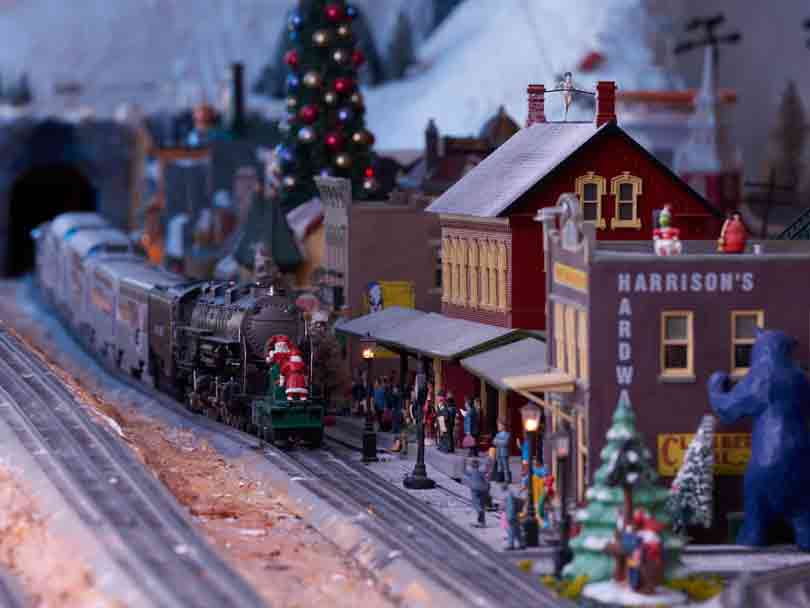 A love of railroads started more than six decades ago when Dave Naples was only 8 years old and his dad gave him a Lionel model train set for Christmas. 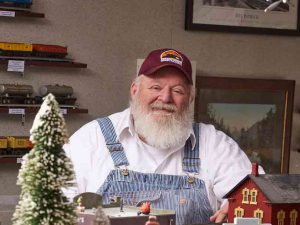 In his 40s, Naples began collecting everything model trains. Through the years, the Grand County resident amassed two storage units stuffed full of model trains and memorabilia. For a decade, Naples and members of the Grand County Model Railroad Club set up a Christmas train display each holiday season for the delight of the community in the small town of Granby in Mountain Parks Electric’s service territory.

Jump forward to today, where a 1,100-square-foot, O-gauge Christmas train display is the calling card of the nonprofit Moffat Road Railroad Museum that sits on the site of a former railroad stockyard just south of downtown Granby. Naples, ever decked out in his denim overalls and railroad ball cap, is the enthusiastic, multi-talented executive director.

“Model trains in general, especially at Christmas, are a very magical thing. Kids just go crazy over them, and so do parents. It’s not just about toys; it’s about Christmas, and it’s about the magic of the holiday season,” Naples said. 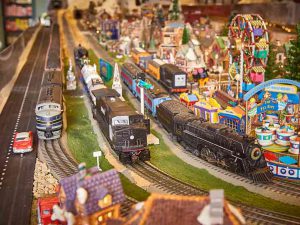 The entrance display is made up of five to six working trains and other moving miniatures such as carnival rides, a ski lift and ski gondola, planes and a hot air balloon.

The museum’s model train showroom features a display of 450 pieces that originally took Naples and volunteers four months to build. The entrancing display includes five to six working trains and other moving miniatures such as carnival rides, a ski lift and ski gondola, planes and a hot air balloon. The colorful O scale display, which is 1/48th of real size, has plenty of action, sound effects, train tunnels, a four-level helix, and even buttons to push for children of all ages to bring pieces, such as miniature wind turbines, to life.

On a high shelf, a G scale model train at 1/22nd of real size comes to life and buzzes around the showroom, which is filled with other memorabilia such as train stamps and photographs. Adjacent to the showroom is a well-organized model train repair workshop where Naples fixes pieces in delicate detail, perhaps having inherited skills from his businessman father whose side business was watch and jewelry repair. 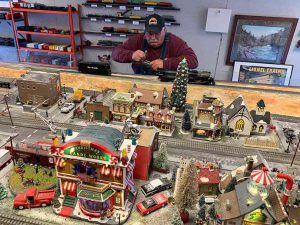 Naples will spend two months turning the summer season model train layout into a Christmas scene for the museum’s holiday season from Thanksgiving to January 9, 2022. Even Santa, with two live reindeer and sometimes Mrs. Claus, visits the museum during a weekend before Christmas.

The burgeoning nonprofit museum sits just 100 feet from an active railroad line where at least 10 freight, coal and passenger trains pass by daily. A short walk away across the tracks is the current Granby train depot where Amtrak service stops regularly and passengers can walk over to view the displays. The railroad museum has been steadily growing in exhibits and in visitors since its official opening in June 2020. Naples estimates he has dedicated at least 20,000 hours since 2006 helping to dream, build and grow the museum. Museum board members and friends credit Naples’ persistence, commitment, determination and enthusiasm for keeping the project moving forward.

“It’s his dream come true. You have to hand it to him for sticking with it all these years,” said Marv Dewey, one of the museum’s carpenters, who has bonded with Naples over their shared love for the restoration of old cars.

“We try to save old things for the future of kids so that they can look back and see how old things worked,” said Dewey, who once designed wooden bridges for the Illinois Central Railroad.

On a sunny autumn day when the museum was closed to the public but staff was working on renovations, Naples couldn’t turn down a visiting family with a 4-year-old girl who loves trains. He showed the family around anyway, just as he had shown visitors around for years by appointment.

In December 2019, a fellow Colorado train lover stopped by, and that day became “the key” to the future of the museum, Naples said. The unassuming man told Naples he was impressed and wanted to know, “What can I do to help?” 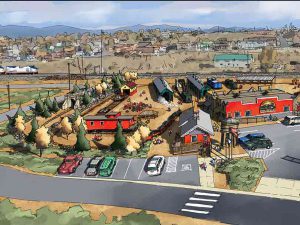 This rendering by Dave Naples and Terry Barnhart represents their vision of what the completed museum complex will look like by the summer of 2023.

“I’ll see what I can do. I’ve been following you for a while. I really like what you are doing,” the man said. It turns out, the man is a noted philanthropist and soon became a significant patron of the museum, allowing the site to blossom with a master plan for construction and renovations through 2023. The museum now employs 10 individuals, including five carpenters working on restorations.

The museum’s marketing director, Diane Ehlert, a Winter Park consultant who specializes in helping nonprofits, noted the anonymous benefactor “is very passionate about the project.”

Museum board members Wally and Susie Baird explained that the mission of the project is to “provide Grand County residents and visitors significant opportunities to learn about the history of railroading in the area.” They said visitors have come from across Colorado; from 45 states of the U.S.; and from countries such as Great Britain, Switzerland and France. Wally Baird said visitors often ask questions such as: How far did the railroad go? How did they get over the mountain? When and how did they build the tunnel? What happened to the Moffat Railroad after David Moffat died?

“It is about preserving what the Moffat Road Railroad meant to Grand County,” said Wally Baird, a retired town manager for Granby who remembers playing with a Lionel model train with his two brothers during elementary school. “There is a broad interest in what we are doing here. It’s not just a model train display; it is preserving the history of the railroad.”

Naples took a visitor to lunch at a grill in downtown Granby, zipping speedily around town in a bright red Ranger UTV. Over meatloaf and mashed potatoes and gravy, Naples talked more about his broad background with past jobs ranging from Christian camp counselor (he earned a Master of Divinity degree) to ski area chef to landscape company owner. His current side gigs include piano tuner and member of an Irish band where he plays piano, guitar, and Irish Bodhran drums and sings.

“I’m a Moffat man,” Naples said, which means he’s a railroad enthusiast who loves the interesting engineering feat and history of the Moffat Road Railroad that follows a geographically difficult path. The museum name comes from the route called Moffat Road, also known as the Denver, Northwestern & Pacific Railway Hill Route, that was constructed beginning in 1904.

Susie Baird explained that the Moffat Road Railroad is famous as the highest standard gauge railroad ever built in the U.S., running through many tunnels and crossing the Continental Divide, cresting at Rollins Pass at 11,660 feet east of Winter Park. The high-elevation, 23-mile section of railroad served for 24 years before the Moffat Tunnel was completed in 1928. The 6.2-mile Moffat Tunnel, built for rail and water lines, is three times longer than the current Eisenhower Tunnel on Interstate 70.

The railway was instrumental in the development of Grand County and in Granby’s becoming a shipping hub for cattle, sheep, produce and lumber, Wally Baird said.

Famous railroad financier David Halliday Moffat, who lived from 1839 to 1911, was one of Denver’s key industrialists of the late 19th and early 20th centuries. Moffat moved to Denver in 1860 and was president of the First National Bank of Denver, the Denver Tramway, and the Denver & Rio Grande Railroad. At one time he owned about 100 gold and silver mines, built multiple railroads and owned banks in mining towns. Moffat Tunnel and Moffat County are named after him.

Pieces of the Moffat Road Railroad Museum collection are donated, purchased, traded, bartered, found online, acquired by Naples at model train shows or found through connections in the railroad lover community. The museum has acquired three cabooses originally manufactured from 1905 to 1936; a 1905 passenger coach; and a rare 120-ton, two-hook, 1913 steam derrick which was used to handle train wrecks for the Denver & Salt Lake Railway. The museum team is renovating the steam derrick in hopes of demonstrating the machine in action several times a year. 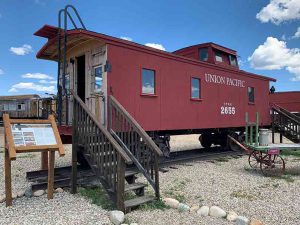 The museum team completed the restoration of a 1923 wooden CA-1 class Union Pacific caboose in May.

Susie Baird said part of the charm of the small-town museum is that huge train pieces that are often sitting in junk piles at railroad yards slated for destruction can be moved to Granby to be transformed from wrecks into educational showpieces. The museum team completed restoration in May 2021 of a 1923 wooden CA-1 class caboose that had been in very poor shape. The meticulously restored caboose now includes some 100 curated items to transport visitors to the 1923 life of a brakeman or conductor. Naples believes the wooden caboose is one of only five restored in the U.S.

Naples is proud that the interactive caboose display allows young guests to touch and to climb up in the Crow’s Nest. Some of those young train enthusiasts include his two grandsons, ages 3 and 4.

“They are nuts about trains, and they blame me for that,” Naples said with a big grin.

Last year, the museum added a large restoration workshop. Work also is underway to double the size of the model train showroom space. The additional space will be dedicated to smaller S scale model trains that are 1/64th of actual size. The museum staff invites the participation of others in the region in helping build the new S gauge display, including modelers, artists, carpenters and electricians.

“It will take a small army to get that done,” Naples said.

Next up for the museum’s collection is a 1922 steam locomotive, or a WestSide Lumber #8 Shay, scheduled for a move from the Royal Gorge Route Railroad in Cañon City. The addition will help highlight the timber industry history in Grand County.

The intensive process of bringing each huge railroad piece to Granby can cost more than $40,000, Naples said. Some of the pieces arrive via truck or railroad on a 90-foot flatbed rail car and are then moved by crane from the close-by railroad line to a new piece of perpendicular track built at the museum.

The museum team is anxiously awaiting the arrival of a circa 1910 steam train replica, or as Naples detailed, a reproduction of a #300 Moffat Railroad 4-6-0 that will become a kid’s ride on the museum grounds next summer.

“I could see this was going to be a really good thing for not only the town but for the county. Once you hear about Dave’s vision, it’s hard not to be a part of it,” she said.

Suzie Romig, a seasoned and degreed journalist living in Steamboat Springs, has been exploring Colorado for 30 years.