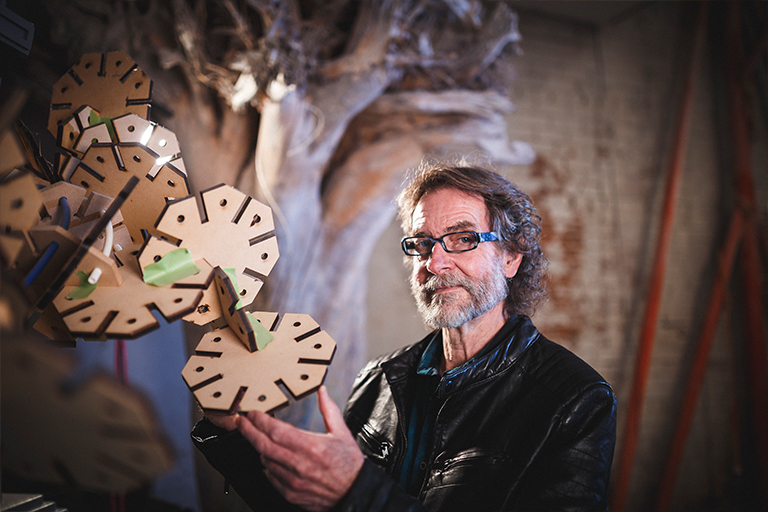 Nestled in the heart of northeastern Colorado’s peaceful, rolling plains lies the little town of Merino. Cattle dot the fields, students fill the award-winning junior-senior high school and, on Main Street behind a century-old curtained storefront inviting no attention whatsoever, sits a fascinating array of spectacular sculptures. This is the studio of Bradford Rhea, and it gives just a small taste of the work that this brilliant artist has created in his lifetime. 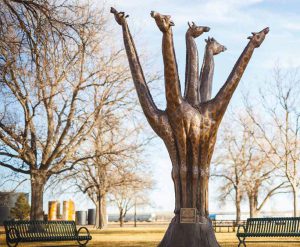 The bronze Stargazers at Sterling’s Columbine Park is one of the most recognized of Bradford’s pieces.

Almost anyone living in Merino or 10 miles up the road in Sterling can point out more of Bradford’s sculptures. They are on display at over a dozen locations throughout the area. There is the revolutionary-era minuteman, a group of five giraffes gazing to the sky and an extraordinary piece inspired by a verse from the Bible. These and other sculptures have become such a draw over the years that a self-guided tour was created by Logan County’s Tourist Information Center.

City of Living Trees
Known as the City of Living Trees, Sterling earned the title because of Bradford’s rich legacy of work. It all began in 1982 when a devastating winter freeze killed a number of large trees around the town. Many of the city’s most beautiful trees were marked for removal, prompting city officials to reach out to a young Bradford, who was just becoming known as a local wood sculptor, with an idea to give the large trunks new life as sculptures.

“Sterling had more to do with any success I might have had than I did,” Bradford said. “I think I was at the right place at the right time. It was a turning point for me.”

It took about a decade for Bradford to complete the initial sculptures, most of which were carved from elm tree trunks. The bare wood pieces were no match for the weather on Colorado’s eastern plains though, and it wasn’t long before the works began to deteriorate in the elements. The complete loss of some pieces moved citizens to form a “Save the Sculptures” initiative that worked to relocate many of the original wood sculptures to indoor venues and bronze several of the most popular outdoor pieces.

“His sculptures have pretty much become an icon for Sterling,” said Marilee Johnson, tourist center director and public information coordinator for Logan County. “It is a major force in our tourism effort and [the] reason why people stop in Sterling. People have heard about him or read about him.”

In 1993, one of those visitors happened to be an employee of the U.S. Office of the Chief of Protocol in Washington, D.C. That serendipitous visit led to a commission of Bradford’s work in the form of a carved wood staff for President Bill Clinton to present to Pope John Paul II during World Youth Day held in Denver that summer. Made from the roots of a honey locust tree, the staff had to be completed in only seven days.

“God did the whole thing,” he said.

Faith, humility and gratitude
Those who know Bradford describe him in much the same way; a remarkably faithful, humble, private person who loves his creative, quiet life in Merino. He speaks often of the deep gratitude he feels for his friends, his local communities and especially his family. He’s been married to his wife for 25 years and together they raised two daughters in Merino. Both young women are creatively talented in their own right, particularly as writers.

“I can’t tell you how grateful I am to my family, friends and groups in Sterling and Merino,” he said, “and how spiritual this journey has been.” 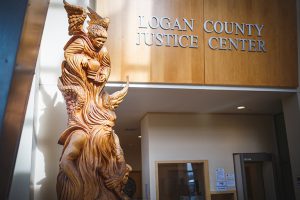 Scion, carved from cottonwood, represents the tenacity of those who live on the plains.

Bradford landed in Merino nearly 40 years ago after being hired by Wisdom Rides, an amusement park ride manufacturer that happens to be headquartered in the tiny town. He’s been with the company for 38 years and feels grateful for a career that’s allowed him to work creatively while continuing his personal art projects.

“It’s an amazing company. We have done so many things over the years that have gone all over the world from here in little Merino,” he said.

Bradford does Wisdom Rides conceptual design work, including one memorable project in which he carved a replica of Mount Rushmore. The family company is the second largest manufacturer of portable amusement rides in the United States. Victor Wisdom, co-owner of the business, has known Bradford ever since his father hired him nearly four decades ago.

“It’s hard to say all the good things Brad is,” Wisdom said. “He’s got a tremendous talent and it’s always been a pleasure to work with him and see his creativity. It’s just astounding to me.”

Of the huge collection of work Bradford produced in his 64 years, it’s his work inspired by Scripture that is his greatest passion.

“It’s becoming more apparent every day that God is chipping away at me. I am a sculpture,” he said.

Bradford says the subtractive process he uses to create his art, meaning pieces are removed to reveal a sculpture, is an ideal metaphor for life.

“With clay and wax you can make mistakes,” he said. “With materials like wood and marble, you have to figure out how to work around the mistakes.”

He also feels it’s important not to rush the process, noting that “the slower you’re moving, the more you see.”

Bradford has developed a special affection over the years for working with the native wood of Colorado’s high plains. While hardwoods may be used more commonly by wood carvers, discovering the sculpture within cottonwood and elm trunks and working with the unique traits of each has brought him special challenges and satisfaction. 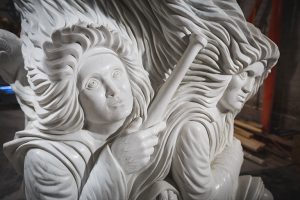 Two of seven angels in the marble sculpture called Exordium.

Years of working with wood eventually led the artist to his dream material and another native Colorado resource: marble. Arguably Bradford’s most breathtaking piece, “Exordium,” was carved from a 30,000-pound block of marble cut from the Yule Marble Quarry in Colorado’s West Elk Mountains. The exquisite 10.5-foot-tall sculpture lives in his studio and took five years to complete. It was inspired by a verse from the book of Revelation and depicts seven angels sounding seven trumpets.

“It represents a beginning and is a message of hope,” Bradford said. “It’s personal to me. It’s a labor of love.”

“His faith is very strong and certainly the work he does for us is one thing, but a lot of the other things he does are basically faith-based and that’s a real pleasure to see,” Wisdom said. “It adds to his humility and shows his beautiful workmanship.”

Catalyst to a growing arts movement
Recent years saw a growing and enthusiastic arts movement in Sterling and the surrounding area, with support and coordination from the Colorado State University Northeast Regional Engagement Center. Just over two years ago, Sterling Creatives, a local artists’ co-op, officially opened its doors in downtown Sterling.

“It was a sign to the community of what could happen with the arts,” said Karen Ramey-Torres, director of the Engagement Center. “We are now in the running for becoming a creative district and have received an invitation from the state to apply for official certification.”

Ramey-Torres describes a creative district as a boundary-dictated location that is home to a concentration of broad artistic activities — activities that, in turn, help attract more creatives to the area. She sees a bright future for the entire northeastern Colorado corridor and says it’s a short journey to connect the dots between Bradford’s work and the fertile ground that exists for creative arts in the region.

“He is seen as that sort of nexus of art going way back,” she said. “I think it really did start with Brad.”

“Since the sculptures are one of our tourist attractions, it just made sense to continue the artistic momentum and grow it in our community,” Johnson added.

Both Merino and Sterling have benefited from Bradford’s civic commitment and generosity to their communities as well. Among many other highlights, he created a coin for Merino High School to raise funds for art scholarships and had a hand in designing a large, colorful mural on Main Street. More recently, he designed a custom bicycle-themed trellis placed in Sterling’s Pioneer Park to celebrate the Pedal the Plains cycling tour’s stop in the city. As always, Bradford is quick to deflect any attention, pointing out that he is only one of many others who helped make the projects a reality.

“This is a very quiet, humble man who appreciates and understands the need for community development,” Ramey-Torres said.

Carving the next chapter 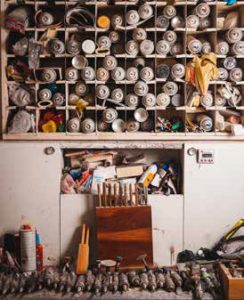 It’s been said that artists never really retire. As the end of his tenure at Wisdom Rides draws nearer, Bradford shows no signs of slowing down creatively. If anything, the opposite is true. With support from the many treasured people in his life and infinite inspiration from his personal journey of faith, he feels like he has “the wherewithal to explode creatively.”

It’s difficult to imagine how much more creative Bradford could become, but his supporters near and far will be waiting and watching with excited anticipation for what comes next.

“He’s just an inspiration to everyone,” Ramey-Torres said.

“Anything I’ve been able to accomplish has so much to do with other people and with God,” Bradford reflected. “I want to spend the last years of my life doing good and something to glorify God.”

Mary Peck is a Colorado freelance writer who enjoys discovering and exploring stories unique to the Centennial State.