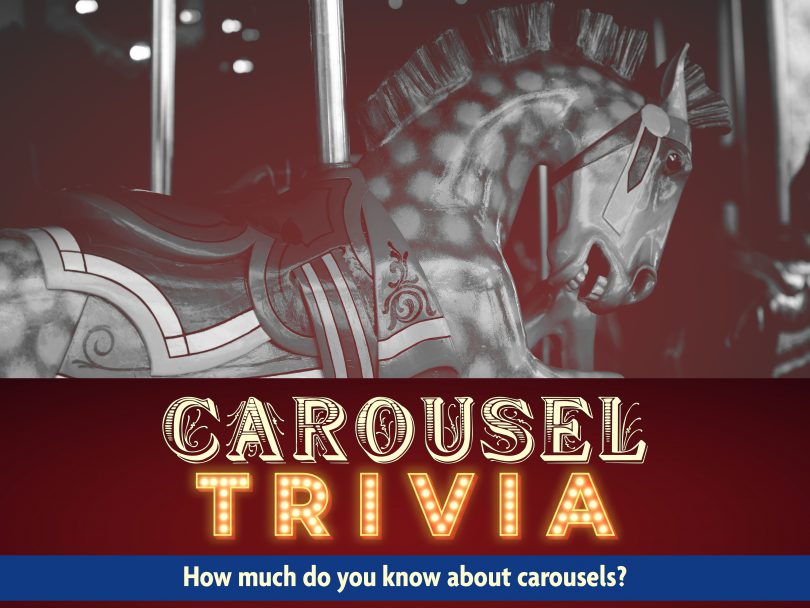 How much do you know about carousels? Here are some fun facts:

• Most carousels rotate in a counter-clockwise direction, except in the United Kingdom where they rotate in a clockwise direction. For hard-core carousel fans, that’s the easiest way to determine the origins of animals. Since all the carousel animals face outward, the animals facing to the left were likely made in America while those oriented to the right are British in origin.

• The world’s oldest carousel dates back to 1780. Built in Germany, it was a stationary platform, featuring four chariots and 12 horses.

• An Englishman named Thomas Bradshaw is credited for building the first mechanically powered carousel. That happened in the early 1860s. It was powered by a small steam engine and spun round and round quite fast. In an article that appeared in the Halifax Courier, one journalist marveled that riders were “not driven half into the middle of next month.”

• Officially, the oldest surviving carousel in the U.S. is called the “Flying Horse Carousel.” Unveiled in 1876 by Charles Dare, it was showcased on New York’s Coney Island to great public fanfare. Eight years later it was moved to Oak Bluffs, New York, where it was housed inside a protective barn. It was later acquired by the Martha Vineyards Preservation Trust in 1986 and has since been designated as a National Historic Landmark by the U.S. Department of the Interior.

• Material for the carved wooden animals on most early carousels varied but the top choice for the Philadelphia Toboggan Company was yellow poplar due its strength, lightweight properties and carving capabilities. Carvings were never produced from a single piece of wood. Rather, they started out as laminated blocks and were skillfully glued and doweled into place.

• To learn more about antique carousels, visit the National Carousel Association’s website: carousels.org. There you will discover everything you would ever want to know about carousels in North America including those still spinning in Colorado.