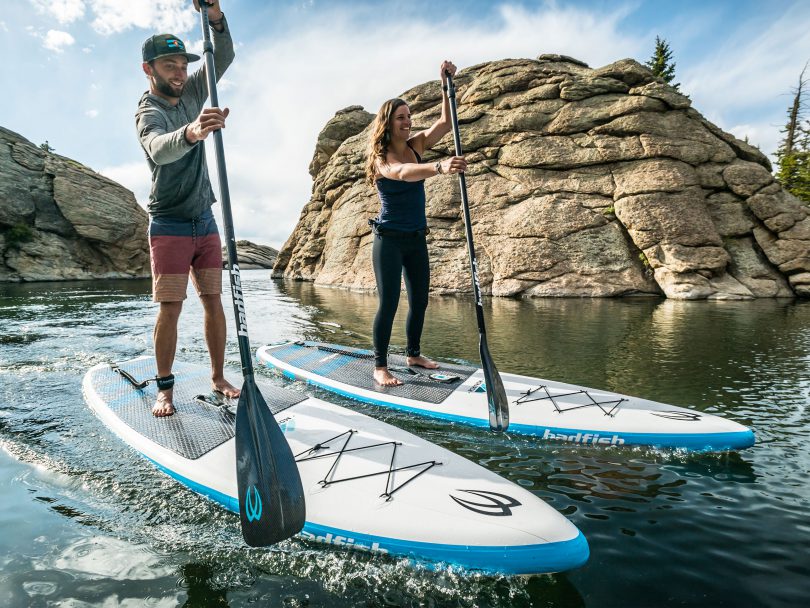 A growing industry is bringing barefoot fun to those wet and wonderful places in Colorado where outdoor fun includes water sports.

Stand-up paddle boarding, often referred to as SUP, is a young but maturing sport sweeping Colorado and beyond. An easy-to-learn water activity, SUP purports to be something anybody and everybody can do, like riding a bike. Here in the Rocky Mountains, Colorado is already well-known for the accessibility of its rivers and lakes. Now, with paddle boards, more people can enjoy the water.

“Colorado is in the forefront of the sport because residents are early adopters of new things — especially outdoor activities,” says Mike Harvey of Badfish SUP in Salida. He and the representatives of the other SUP manufacturers agree that the “culture in the state is one of health, fitness and outdoor adventure.” 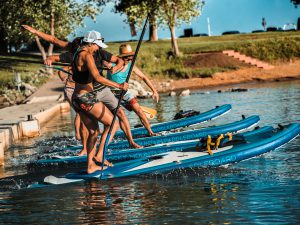 More and more people are finding out what SUP is all about. Photo credit: Rocky Mountain Paddleboard and Bearded Bros. Media.

Zack Hughes, board designer and partner in Badfish SUP, explains the sport’s appeal. “Masses of people are trying SUP because the skill set is simple. Some people are intimidated by sitting in a kayak. They’re afraid of flipping and going under the water. But standing up on a board, looking down into the water, provides a different perspective. You can see more of what’s under there and it’s a more comfortable position for the body.”

Johnny Lombino of SOL Paddle Boards in Telluride agrees. “Instead of the focus and concentration needed as you speed down a moving river in a kayak, you move at your own pace — or not at all — as you take in the beautiful 360-degree view,” he says. “The quick learning curve with a wide stance on a stable board with controlled movement makes it appealing to a lot of people. The low-impact sport is great for folks with minor injuries and can even help with rehab. It just requires balance and some core strength, then helps strengthen muscles in the arms, shoulders, back and abs as you pull yourself across the water.”

IN THE BEGINNING…
Stories abound on how, when and where paddle boarding actually started. People have been standing in floating objects and propelling themselves across the water for centuries.

But looking back, it was all in boats. There was a breakthrough in 1912 in Australia when a vessel called a surfski was introduced. It was a closed hull that didn’t catch water and was easy to stand on.

More recent history, agreed on by surf culture experts, proposes that the sport started in the U.S. in Hawaii and was documented in the 1939 movie, “Blue Horizon.” The famous Hawaiian surfer Duke Kahanamoku rode a surfski with a two-bladed kayak paddle. The surfski was a gift from a traveling surf lifesaving team from Australia.

Other Hawaiians credited with perpetuating the sport include John Zapotocky and John “Pops” Ah Choy, who copied Kahanamoku around 1955 but started using a single-sided paddle. Laird Hamilton, another famous Hawaiian surfer, and his buddy, Dave Kalama, were the first to be seen in 1996 using short outrigger canoe paddles while standing up on long boards during an Oxbow photo shoot on Maui — some claim that this was the birth of modern SUP. Hawaiian surfer Rick Thomas is often credited with bringing the sport to the mainland United States in 2000.

How it became a worldwide phenomenon depends on who you ask. As all sports naturally evolve, not every modification is documented. As the sport matures, modifications to board designs, paddles and ancillary equipment occur every year.

Initially, the boards were hard and made of foam core, but many riders now prefer the inflatable boards

Many riders, including Peter Hall, founder of Hala Gear in Steamboat Springs, have surfing or kayaking backgrounds. “SUP is really like a melding of the two sports,” he says. “People can play in white water, go down river or surf in hydraulic waves.”

Charlie MacArthur of Aspen Kayak and SUP was one of the first early adopters of the sport and the first to SUP in the rapids in the early 2000s. Having grown up surfing in Hawaii, MacArthur says, “Being a thousand miles from the ocean, surfing a river was a no brainer.”

He adapted some old windsurfing boards and started teaching SUP in 2004. “It was harder because the boards were narrow, only about 24 inches wide, and we were using rudimentary long canoe or modified raft and kayak paddles.” He knew if this sport was going to take off, they would need better equipment.

MacArthur and a friend, pro surfer and shaper Dave Parmenter, came up with the first SUP for the river in 2008 and the possibilities expanded. The lighter and thicker hard board, called the C MAC ATB (all terrain board) caught on.

When Harvey, who is now a partner at Badfish, first tried the new sport, he thought it was dumb. “It was just an oversized long board and it was hard to stay connected to it in the river. We were trying to run rivers on ocean boards.” 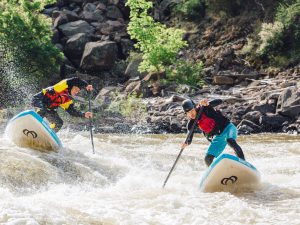 Great minds that like to play in the water think alike. So, around the same time, Harvey’s Arkansas River guiding buddy Hughes was tinkering with experimental designs for surfboards in his garage. Also wanting to surf river waves, Harvey and Hughes teamed up to create a hybrid with more volume and shaped differently. “We wanted something that would be like kayaking on our feet!” Harvey says.

They strategized to build boards for inland paddle boarding and formed Badfish when they settled in Salida to raise their families.

Hughes’ designs progressed quickly as they kept redefining what was possible in the river. They were also motivated by a desire to run out to the river and have some fun at lunchtime or after work.

Hall, a surfer and kayaker, also wanted a new toy for playing in the rivers. He went down Brown Canyon in the Arkansas River in 2011 on a cheap, Chinese inflatable board that couldn’t do what he wanted it to do. He started Hala Gear to provide a tool to explore wild places. “I want people to get hooked. It will mean that more people then care about our wild places.”

Hala is definitely an innovator in board designs and currently has three patents pending. It has pushed the sport to new levels, especially in downriver racing.

Shawn Rodine of Rocky Mountain Paddle Board invites people to demo boards from his shops right on the water at Bear Creek Lake Park in Lakewood, Boulder Reservoir and Union Reservoir in Longmont, noting that the appeal is so universal because of the fun factor. 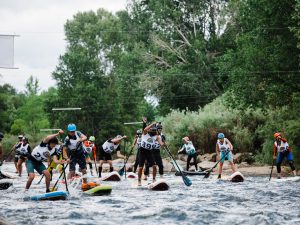 SUP racers at the start of FIBArk race in Salida. Photo courtesy of Badfish SUP.

“People are really learning just how much you can do on a board,” Rodine says. “Athletes from other disciplines realize that SUP is a great way to cross train. Being on the unstable surface forces you to use muscles you don’t otherwise use. It works everything at once. You’re working on balance, core strength, cardio, upper body and strengthening the small stabilizer muscles in your legs all at the same time.

“Even a downward dog is more challenging on an unstable surface and utilizes more muscles. Feeling the wind in your face, seeing the birds fly overhead and connecting with nature really adds to the yoga experience.”

In 2009, Javier Placer of SUP Colorado first tried the sport. “SUP provides a new way for people to interact with the water,” he says. “As I saw myself getting older, I knew that this was an activity that could challenge me and keep me fit. I decide the intensity of the activity.”

MORE RIDERS TRY SUP
The industry here really hit its stride in 2011 when three Colorado companies began designing and manufacturing the boards. This coincides with a huge influx of new riders across the United States. According to the Outdoor Industry Association, nearly 1.2 million people, or 60% of all riders, tried SUP for the first time in 2011. This is up 18% from 2010.

There are so many ways to enjoy the sport that this is no surprise. Variations include flat water paddling, recreational, fitness and sight-seeing, as well as racing on lakes, large rivers or canals; surfing river or ocean waves; paddling in river rapids (whitewater SUP); fishing; and even practicing yoga.

But one of its biggest draws is for those who were previously unable to participate in water sports for various reasons, including injuries and disabilities. Lombino from SOL loves the sport because it brings so much happiness to people who have never been able to get on the water. Nationally, the largest demographic gravitating this sport are 35- to 44-year-old men and women, followed by 25- to 34-year-olds.

The vast majority of boards now are inflatable — this technology has greatly contributed to its popularity. They are easy to fold up, put in a bag or backpack and carry out to the lake or river. There is no need for a roof rack, a trailer or even a car. Just throw on your backpack, jump on your bike and head out.

“It just makes more sense, Lombino says.” They’re more durable, transportable and you can bash them on the rocks and nothing happens.”

The Colorado manufacturers distribute boards around the country and the world but agree that most of their sales come from Colorado, followed by the Pacific Northwest and the Southeast respectively. Paddle board enthusiasts, like Rodine, own a board for each activity. He confesses to owning four, but for the average person who just wants a fun hobby, they can find a great all-around board like the one made by Hala. “The UKA inflatable board will be adequate for racing, surfing and fitness,” Rodine says.

Each company has something that sets it apart. SOL Paddle Boards specializes in brightly colored boards that “scream fun and excitement,” according to Lombino. “You can see our boards from a half-mile away.” Also contributing to the sport, Recreation, Engineering and Planning in Boulder is a leader in white water park and river wave design. The company is responsible for 80% of all white water parks in North America, says president Gary Lacy. “All our designs are as unique as the rivers we work with and the communities they flow through.”

“SUP is the closest we’ll ever come to walking on water,” says Amy Jordan, who rents and sells boards at four scenic locations in northern Colorado, even for those with disabilities.

Manufacturers like On It Ability Boards created special boards for special clients. Extra wide boards that hold wheelchairs allow more people to enjoy the peace and tranquility of being on the water. Ann Marie Meighan, executive director for Adaptive Sports in Durango, says, “The military veterans that we take out on the San Juan River love it. It’s like meditation on water. The boards are very stable and, of course, location selection is really important.”

As MacArthur notes, with this wet and wonderful sport, “New people are literally jumping on board every day.”

Malia Durbano is a freelance writer who lived and worked for years in Durango. She has fond memories of southwestern Colorado and its outdoor activities.