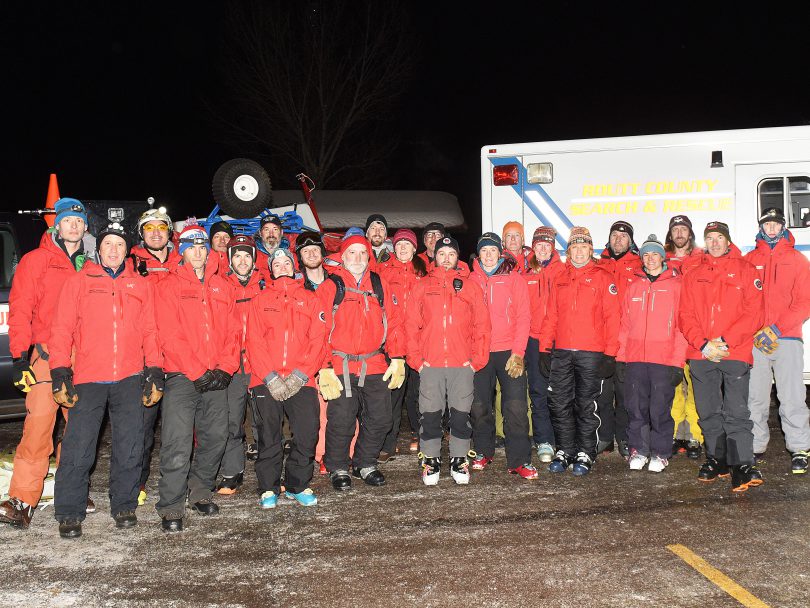 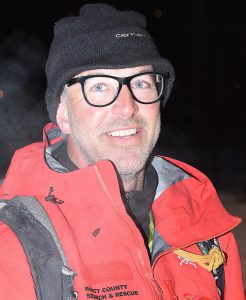 You’ll have to excuse Dan Gilchrist if he’s not at the head of his hand-built, Sunday dinner table for pot roast with his family. If his daughters Caroline, 15, and Mackenzie, 10, are staring at an empty seat, he’s likely out on a call as a volunteer for the Routt County Search & Rescue team in Steamboat Springs.

“That’s usually when they get the calls,” says his wife, Karen. “It’s often around 7 p.m., which is right around dinner time. That’s when people are reported missing.”

Karen knows it comes with the territory of the man she married. A loving father and builder, Gilchrist realizes it sometimes takes time away from his family, but it’s a calling that’s rooted deeply. “We worry but we support him — even though it means missing out on time with the kids,” Karen says. “It’s his way of giving back and we know it means a lot to him.”

Giving with a risk
Gilchrist, as with the team’s other 25 members, has a lot to give. The longtime local is an expert backcountry skier and outdoorsman and knows the terrain of the area’s Park Range as well as he does the dinner table he built. He also has the skills to reach it.

Still, the worry isn’t without reason. Oftentimes, rescuing someone else means putting yourself at risk. Take a rescue back in January 2017, for instance. During a 30-inch storm that blanketed the backcountry, with temperatures dropping below zero, a skier and a snowboarder lost their bearings atop Buffalo Pass and became lost in the cliff-riddled North Fork Fish Creek drainage outside Steamboat. During the rescue, an avalanche released on the south-facing slope, burying search and rescue board president and team member Jay Bowman. 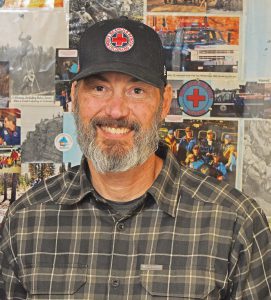 “I was carried about 400 feet down, bouncing over rocks and tumbling in the snow the whole way,” says Bowman, 56, an eight-year member of the team. “Luckily I was able to hook myself around a tree, with my head and arm barely above the surface. But I was scared … I didn’t expect to survive it.”

While he was in good hands — the rescue team got to him within two minutes — the call home to his wife afterward was difficult. It’s the type of call Karen hopes she never fields while spooning gravy onto mashed potatoes for Caroline and Mackenzie.

Still, at least the danger of that kind of hazard is less in Steamboat than it is in other areas of Colorado. In more avalanche-prone regions like Aspen, the slide danger is even more prominent. In February 2019, when Aspen locals Owen Green, 27, and Michael Goerne, 37, were reported missing and later confirmed dead in an avalanche in the Elk Mountains, local search and rescue personnel started out at midnight but had to suspend their search until the avalanche danger subsided. A similar situation arose closer to home in February 2017 when Steamboat musician and father-of-three Jesse Christensen, 55, was killed by an avalanche while riding his Timbersled (a motorcycle snowmobile) in the Flat Tops mountains. The rescue went from a search to body retrieval, putting rescuers in the same risky terrain.

“It seems like it happens a lot on holidays and weekends,” Gilchrist says. “And we definitely get calls at night a lot. We always joke that we see the area’s most beautiful spots in the dark with a headlamp.”

Skills to help others
Growing up in Minnesota, Gilchrist moved to Steamboat in 1988 to ski. He brings that background, as well as rope skills, off-road-vehicle experience, freak-like endurance and more to the search and rescue table. The organization’s other members, including a seven-person board, each bring their own skills to the equation, a formula that seems to work.

Bowman says he didn’t have any specialized search and rescue skills when he joined the organization, other than being a lifelong skier, mountain biker and climber, and explorer of northwestern Colorado’s backcountry for the past 23 years. With his wife being a physician, he didn’t have to work as much, affording him the time to volunteer. And he says his master of business administration degree helps him manage the organization on the business side. 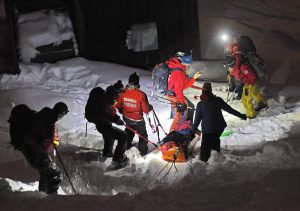 The team – a family of sorts – train at Howelsen Hill.

“For me it’s a perfect fit,” he says. “It takes me away from the family a fair amount, but it allows me to give back to the community I love.”

This turns the team into a surrogate family of sorts as well — dealing with trauma and helping others has a way of bringing people together. “We all enjoy what we do,” Bowman says. “It’s something we choose to do, outside in an area we love, so it builds a real bond.”

While the volunteers are on call all the time, they can pick and choose which missions they go on, he adds, responding only when commitments allow. “If a call interferes with birthdays and anniversaries and things, I try to stay with the family,” he says. “Unless it’s something urgent.”

And with everyone’s different skill sets, the whole is greater than the sum of the parts. “Some people are physically fit for the demands it requires, others excel at motorized aspects and others are good at things like logistics and navigation,” Gilchrist says. “It’s this mix that makes it work.”

Of course, not all rescues — like that of Christensen — have happy endings. “Unfortunately, the ones that stand out the most are the ones that weren’t necessarily a rescue,” says Gilchrist. “They’re the recoveries. But when you do help someone, whether they’re injured or weren’t prepared to spend the night out, it feels great.” 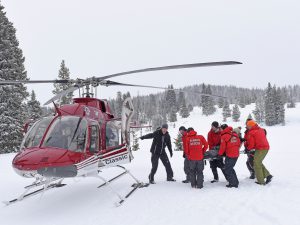 Anders Lowenfish, a paramedic with Classic Air Medical, guides a Routt County Search & Rescue team toward a waiting helicopter during a training session.

Working under the jurisdiction of the state and the local sheriff ’s department, as with the state’s other 45 search and rescue teams, Routt County Search & Rescue was formed in 1968 by a group of friends who were often called on by other friends to help them get their snowmobiles unstuck in the backcountry. They then trained in other aspects of wilderness rescue to help others who might need assistance. That concept of helping strangers as though they’re friends remains the organization’s driving mantra today.

There are similar starts for the state’s other teams, all of whose volunteer members are on call 24 hours a day, 365 days a year, in any type of weather. While the incident commanders work on a rotating schedule, for the rest of the volunteers, “If the pager goes off and your schedule allows, you go,” says Gilchrist, who runs his own business, Alpine Craftsman, which affords him such flexibility.

The calls they receive vary depending on the time of year and their location. Teams in the San Juans of southwestern Colorado, or the Elk Mountains surrounding Crested Butte and Aspen, might get more avalanche- and mountaineering-related calls, and even those pertaining to high-altitude complications. The Routt County team fields a lot of hunting accidents and lost snowmobiler and hiker calls. The average mission, says Bowman, takes five to eight hours start to finish.

“You never know what it’s going to be when the pager goes off,” Gilchrist says. “You have to be prepared for everything.” And it can get tricky in an area like northwestern Colorado, where Rabbit Ears Pass includes portions of three counties — Jackson, Grand and Routt — each of which has its own search and rescue team. Typically, a call comes into dispatch, which runs it through that county’s sheriff ’s department, which then assigns it to that region’s search and rescue team. If one team’s members are already busy or otherwise can’t reach the location quickly, they might assign it to another nearby team.

Assistance for law enforcement
Local law enforcement is happy for the assistance. “They provide a much needed and widely used service to our community and are a big help,” says Routt County Sheriff Garrett Wiggins. “They’re a team of highly dedicated volunteers who train hard and dedicate themselves to saving others.”

Bowman says the number of missions they go on each year is dropping, bucking statewide trends. Along the Front Range and elsewhere, more and more people are heading out into the backcountry, often unprepared, and they can access rough terrain relatively easily. This has resulted in more calls for assistance. Routt County is farther off the beaten path, however, meaning people have to want to come here, Bowman adds. And the terrain is different; they field more calls for people who are lost or have stuck snowmobiles than the injuries other Colorado teams might field.

“We used to average about 100 missions per year, but now it’s decreased to about 60 with the advent of cellphones and handheld GPSs,” he says. “A lot of times we can walk people out over the phone.”

And there’s a difference between a search and a rescue, he adds. If it’s a rescue, there’s no break; they’ll do whatever they can to evacuate the victim as quickly as possible. Searches can sometimes last days, with the team retiring at night to resume again the next dawn. In 2005, cross-country skier Charles Horton, 55, was rescued after spending nine days stranded in the Flat Tops Wilderness Area with a broken leg. 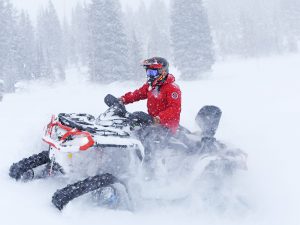 Snowmobiles are a source of transportation for search and rescue missions.

To do so, the team employs a fleet of eight ATVs, eight snowmobiles, one snowcat, two rescue trucks, an SUV and a mobile communications center. It also has a wheeled litter for areas they can’t access with machines due to terrain or wilderness area designation. They might also use dogs — coordinated through the Colorado Search & Rescue Board — especially for searches that have gone on for a while.

All this costs money, for which they’re constantly scrambling. Funded primarily from donations, as well as hunting and fishing license purchases and snowmobile, ATV and boat registrations, all of its services are free, save for medical transportation by aircraft or ambulance. Proceeds from licenses and off-road vehicle registrations go to a state fund administered by the Department of Local Affairs. Teams then request a grant from the department, or a reimbursement if costs are high on a particular mission. Local fundraisers, Bowman adds, are key to keeping the operation going.

For the victims in question, it’s a great, free insurance policy for when things go wrong. All they have to cover financially is official medical transportation if it is needed.

This has arisen in a handful of rescues that Gilchrist remembers well. Once he was called on a mission where a utility task vehicle had rolled near Lynx Pass in southern Routt County. The vehicle’s driver died on the scene, with the passenger suffering a broken back and pelvis. The rescuers had to first get her back up onto the trail, and then down the trail to a suitable location for a helicopter evacuation.

Another time was on a popular hiking trail to King Solomon Falls, which requires scrambling up a creek bed to a set of waterfalls. Two hours into her hike, a woman was hit by rockfall, resulting in a severe lower leg injury. The team had to reach her, rig a litter to lower her, “carry her across a crazy sidehill along the creek” and then haul her back up another cliff.

“A lot of times you have to improvise,” Gilchrist says. “It’s not always obvious at first what the best solution is; you have to figure it out as you go.”

He was late for the dinner table again that night. But, boy, was his family glad to see him.

Writer Eugene Buchanan writes about the outdoors from his home in Steamboat Springs.