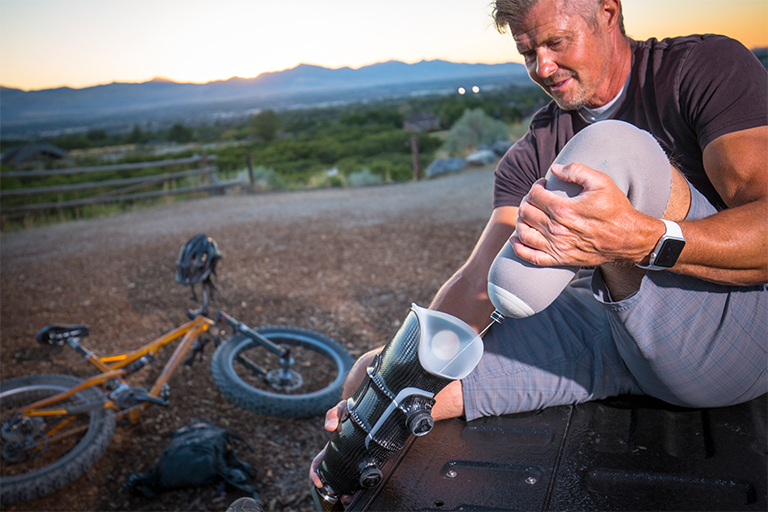 On a blue sky, powder snow day in 2009, certified prosthetist Joe Mahon was sitting on a ski lift with his wife when he received a phone call from a patient. She was preparing to leave on a trip and needed her prosthetic device adjusted. Mahon, who owns Peak Prosthetic Designs in Salt Lake City, Utah, had noticed that patients were often frustrated by an inability to easily adjust their own artificial limbs.

As Mahon waited for his wife to step off the ski lift he noticed that she tightened her snowboard boots via a small dial added to the boots for that purpose. Then, as she snowboarded away, she stooped to tighten her boots again. At that moment, Mahon says he experienced a “lightbulb moment” when he realized that a similar dial could be used for prosthetics that would allow patients to make their own adjustments — without the hassle of removing their clothing and prosthetic devices, or having to make a trip to a clinic for an adjustment. 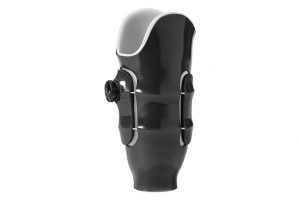 With a simple twist, the Boa dial allows micro-adjustments to the prosthetic socket, creating compression, suspension and closure around the limb.

Mahon knew about Boa Technology, a Denver-based business that was founded in Steamboat Springs that made components for snowboard boots, hockey boots and other sports shoes — small dials that allow for micro-adjustments of footwear. Mahon approached Boa’s Jimmy Capra with his idea of applying the Boa technology for medical uses.

“We realized this was going to do a lot of good for a lot of people,” Capra says. Surprised that no one had invented an adjustable prosthesis before, Mahon filed a patent.

In 2014, Capra left Boa Technology to help Mahon found Click Medical in Steamboat Springs where they are served by Yampa Valley Electric Association. The company’s main product is RevoFit, a kit that includes various components that enable prosthetists to fabricate micro-adjustable prosthetic sockets. Once the parts are integrated, the socket fit can be customized with micro-adjustments of the Boa dial creating compression, suspension and closure around the limb.

Being able to adjust their own prosthesis with a simple twist of a dial empowers amputees. It beats having to stop and remove clothing and the limb, or make a trip to the clinic, which “is wildly inefficient and extremely frustrating,” says Capra, the company’s chief executive officer. “It is time consuming for the patient — imagine if you had to spend time removing clothes and devices, or visit your physician every time you needed to loosen your belt.” The system helps the provider, too, by saving time and money that is typically spent on refitting appointments, which often do not qualify for insurance reimbursement.

The human body changes in size throughout the day as more venous blood is pumped out of the limb — causing a decrease in volume. A person with an amputation below the knee will typically find his or her residual limb substantially smaller by the end of the day, which causes socket fit issues. Fitting problems are exacerbated by a sedentary lifestyle, which is fairly common among amputees.

Until five years ago there was no way for patients to deal effectively with this problem since prosthetics are static devices. Typically, a person will put his residual limb into the prosthetic socket in the morning. As the leg decreases in volume throughout the day, the socket becomes loose, kind of like a shoe that doesn’t fit and can fall off or cause blisters. Amputees adapt by adding sock layers to their residual limb — sometimes six or eight layers by nighttime. Skin irritations can also occur from improperly fitted devices. Click Medical’s RevoFit adjustable socket solves these problems.

Click Medical at Aspen’s X Games
Kolleen Conger has been an avid dirt biker all her life. On October 30, 2008, the lean, wiry woman from Payson, Utah, crashed while attempting a 90-foot jump, breaking both legs and shattering her ankles. Over the next four-and-a-half years she underwent 10 surgeries while continuing to ride her dirt bike — despite the pain. However, she no longer raced as she did before the accident. 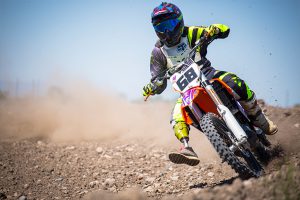 After a dirt bike accident in 2008 and amputation in 2013, Kolleen Conger chose her RevoFit prosthetic. The technology of the prosthetic keeps her riding, jumping, climbing and competing on her bike.

Six years ago, when the pain became too great, Conger says her physician recommended that she “retire to the couch.” Instead, the mother of two opted for amputation of one of her legs to end the pain so she could continue riding. She became one of Mahon’s first patients to be fitted with a prosthesis with the RevoFit technology.

Conger chose Mahon from a list of prosthetists she was given — a decision she calls “fate.” With Conger being one of his first patients using the new RevoFit system, Mahon went to watch Conger ride so he could determine how best to help her with a new artificial leg. “Nothing but good has followed after meeting Joe,” Conger says. “I’ve been able to do so much since he’s been in my life.”

In the year after she was fitted with her new prosthesis, she spent 170 hours riding her dirt bike compared with 100 hours of riding in the four-and-a-half years between the time of her accident and the amputation. She’s back to doing jumps, climbing hills and other technical riding. As the only participant with an artificial limb, Conger, 37, competes in Idaho, Utah, Nevada, Arizona and California races. She won first place in 2017 and 2018 in the Utah Sportsman Riders Association series.

In January 2018, Conger participated in the televised winter X Games held in Aspen. She rode a snowbike (a dirt bike outfitted with a ski in front and a snowmobile track in back). It was Conger’s first time competing in the X Games and with other disabled athletes. She competed at the X Games again last month.

Another early patient of Mahon’s is U.S. Army paratrooper Dave Gardner, who served in Iraq in 2007. Gardner and his team were responding to a Humvee explosion that killed four servicemen when another soldier, who was driving a Bobcat utility vehicle, accidentally ran over Gardner. Both of Gardner’s legs were shattered. He ended up in a medically-induced coma for 16 days and they had to amputate his leg below his right knee.

Back home in Springville, Utah, where he lives with his wife and children, Gardner, 40, learned how Mahon was still in the process of developing the RevoFit system for his prosthetic devices. In 2010, Gardner was fitted with his artificial limb — he calls it his “good leg” — using the new technology. “I wouldn’t have a prosthetic without the RevoFit system,” he says.

“I’ve always been a hunter and fisherman,” Gardner says. “With Boa it’s a lot easier. I’m not carrying all these extra socks. It enables me to do the things I want to do. I’m able to get out.”

Click Medical also helped 34-year-old Erin Maughan, whose leg was amputated below the knee in 2008. Maughan endured a childhood of reconstructive surgeries after a medical accident destroyed the nerves in her leg and foot. Finally, when she was in her 20s, the Logan, Utah, woman could no longer walk due to the pain. She was told that her options were a wheelchair and more salvage surgeries. “I said, ‘Just take it off; I don’t want any more surgeries,’” she recalls.

Maughan’s first prosthesis gave her blisters, which her provider told her she should expect. Then another amputee recommended she see Mahon at Peak Prosthetic. Mahon was still experimenting with the new design. Mahon fitted her with a new prosthesis, which she says is “100 times better.” She says she was happy to be his “guinea pig.”

As the mother of a 3-year-old boy, Maughan says she’s grateful for the mobility and comfort she has experienced with the RevoFit adjustable limb. “I don’t have to stop with my toddler and change my clothes to take off a sock. I can adjust a knob,” she says. 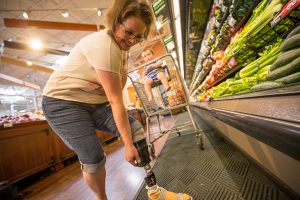 Erin Maughan’s toddler doesn’t stop, and now neither does she. With her RevoFit adjustable limb, Erin doesn’t have to change clothes or add or remove socks from around her limb to get comfortable throughout the day.

As the company’s chief technical officer, Mahon travels around the world educating providers about the RevoFit system and how to incorporate kit components into a custom prosthesis. The Colorado Office of Economic Development and International Trade recently awarded an Advanced Industries grant to Click Medical, which sells RevoFit kits in 28 countries. “It’s exciting that the state recognizes that we’re doing something important here,” Capra says.

Patients who are outfitted with a RevoFit adjustable limb end up wearing their prosthesis more, and are also more active, says Mike Muratore, a certified prosthetist and orthotist at Hanger Clinic in Bethesda, Maryland. “What we’ve always done up to this point, we’ve taken the soft fluid limb and forced it into a rigid vessel,” Muratore explains. “This (RevoFit system) allows the socket to be flexible. The fluid limb and the flexible socket work together, expanding and contracting with each other. Patients like that the socket can be adjusted. It can adapt to their body in real time by turning a dial. It’s simple and easy for the patient to use.”

Steven Keeton, chief of the prosthetic lab at the Cincinnati Veterans Administration Medical Center, has been fitting patients with the RevoFit adjustable socket for about a year after learning about it at a trade show. He calls it a “phenomenal tool” for adding or decreasing pressure in specific areas where needed. His patients love it. “Say there’s a guy on the airplane for four hours; he can, with the RevoFit system, loosen the socket up for comfort,” Keeton explains.

After 17 years of war in the Middle East and Afghanistan, there are 1,500 American servicemen and women in need of a prosthetic device. Armed conflict, however, is not the main cause for amputations. Of all the amputees he sees, Keeton says 75 percent are a result of diabetes and poor circulation.

In the general population, nearly 300 people per day in America lose a leg due to diabetes, Capra says. “Diabetes is growing faster than the American Diabetes Association ever thought possible. These health problems are real and incredibly widespread,” Keeton adds. “When we started we sold 1,500 kits a year. This year we’ll sell 12,000. We’ve outfitted about 40,000 amputees. Click Medical is addressing the way prosthetic sockets fit. We empower users to adjust that fit anytime, with a simple twist of the dial.”

And a little adjustment can make all the difference in the lives of these amputees.

Sharon Sullivan is a freelance writer from Grand Junction who loves telling the stories of the people on Colorado’s Western Slope.