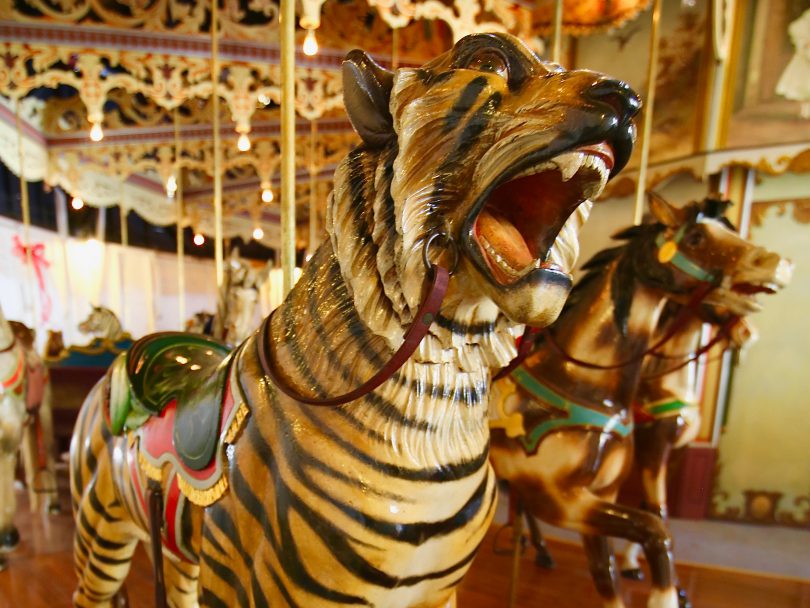 A roaring tiger is one of 46 animals on the historic Kit Carson County Carousel.

Once upon a time in America, brightly colored carousels spinning round and round to the sound of Wurlitzer organs were the ultimate in entertainment.

From the Gilded Age to the 1920s, an estimated 6,000 mechanized merry-go-rounds were built for amusement parks and municipalities across the country, all trying to attract the biggest crowds and best reviews. Short of a three-ring circus, it was the hottest ticket in town.

According to the National Carousel Association, thousands of “classic wood carousels” were built and sold. Sadly, less than 200 survive today. But the good news is that 11 of them can be found scattered across Colorado from the mountains to the eastern plains.

If you’re looking for a weekend getaway once all of the COVID-19 restrictions are lifted, one or more of these colorful carousels would be a fun, easy destination. Here is a look at a few you might want to check out.

Back in 1927, three elected officials in rural Kit Carson County took a big chance. When the Philadelphia Toboggan Company carousel at Elitch Gardens in Denver went up for sale that year, the county commissioners bought it for $1,200 and had it shipped to Burlington. The officials were ridiculed for their purchase and eventually drummed out of office. 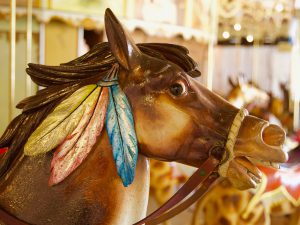 This beautifully restored pony is one of several on the Kit Carson County Carousel in Burlington.

Fast-forward to today. The Kit Carson County Carousel is now considered a priceless carousel, one of the best in the nation. It was designated as a National Historic Site in 1987 and draws thousands of visitors annually to Burlington. You might say it was the most well-spent money ever “wasted” in rural Kit Carson County. Almost a century later, those three county commissioners — C.J. Buchanan, G.W. Huntley and I.D. Messenger — are now considered visionaries.

Following an extensive 25-year restoration project, the Kit Carson County Carousel was returned to its original condition in 2001. Its many one-of-a-kind oil paintings and intricately hand-carved animals — horses, goats, giraffes, camels, lions and deer — were painstakingly cleaned and repainted by art conservators John Pogzeba and Will Morton in the late 1970s. An equally daunting restoration was also done on “The Monster,” a priceless 1909 Wurlitzer Military Band Organ containing 255 pipes, bass and snare drums.

Charles Looff was one of the nation’s most talented carousel makers. A master woodcarver who immigrated to New York City from Denmark in 1870, Looff built the first carousel at Coney Island. One of his later masterpieces was sold to a small park near Salt Lake City in 1910, but the Saltair Park Carousel fell on hard times and was sold to the Utah State School in 1959.

There, it was rebuilt and maintained by the school’s handicapped residents until a decision was made to scrap the carousel. All of its hand-carved animals were sold to private collectors. Fortunately for Colorado, the story of the Saltair Park Carousel did not end there. 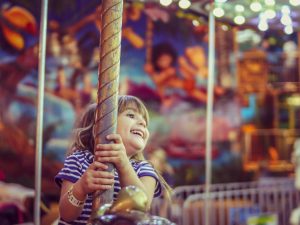 Carousels bring out smiles in riders of all ages.

As a young soldier with the U.S. Marine Corps in Vietnam, Scott Harrison carried a small hand-operated music box with him during those turbulent times, a precious gift from his sister. When things got tough Harrison would listen to Chopin’s melancholy arrangement of “Tristesse” on the small music box. Tristesse, by the way, is a French word meaning sadness or sorrow.

The music was Harrison’s way of escaping the madness of Vietnam, to imagine a swirling carousel in a faraway mountain meadow.

When Harrison returned home, he eventually settled in the mountains above Boulder. While attending a carousel convention with his daughter in Michigan in 1985, Harrison heard about the empty Looff carousel frame gathering dust in Utah. He immediately contacted the school and bought it for $2,000. Later, he and a friend drove to Utah, disassembled it and hauled his dream back to Nederland.

Then the former U.S. Marine taught himself how to carve and for the next 26 years Harrison carved animals out of wood. By 2010 he finished more than 50. It didn’t take long for the community of Nederland to embrace and adopt Harrison’s project. Through fundraisers, grants and donations, more than $700,000 was raised for what became the Carousel of Happiness, officially dedicated on Memorial Day in 2010 as part of a remembrance service for all military veterans — and for two of Harrison’s fellow Marines who never made it back from Vietnam.

Today in this Colorado mountain valley, the music comes not from a small music box but rather from an original 1913 Wurlitzer Organ.

LAKESIDE CAROUSEL
Available when the amusement park is open, for an additional 50 cents

The story behind every old carousel is sometimes more interesting than the carousel itself. That could be true with the popular carousel at Lakeside Amusement Park near Denver. The Lakeside Carousel is one of only a handful of surviving “roundabouts” made by American carousel pioneer Charles Wallace Parker.

Born in Illinois in 1864, Parker’s family moved to the bustling Kansas cattle town of Abilene in 1869 during a time when herds of Texas longhorns were still being driven north on the Chisholm Trail. Always an entrepreneur and builder, Parker purchased an Allan Herschell carousel in the early 1890s and began tinkering and testing new mechanisms and setups. Then he began building his own amusement rides in Abilene in 1894. To advertise his rides, Parker traveled the carnival circuits across America’s heartland. As demand for Parker’s rides increased, he eventually opened a bigger factory in 1911 in Leavenworth, Kansas, where the C.W. Parker Carousel Museum is still headquartered, attracting visitors from around the world.

The owners of Lakeside acquired their Parker classic in 1908, and it’s been spinning for over a century. What makes the Lakeside Carousel unique among hardcore carousel aficionados, according to the NCA, is the style of the distinctive carvings — so distinctive that they are often described as “moving folk art.” In fact, some believe this carousel represents a collaboration of carvings done by different woodcarvers from the late 19th and early 20th centuries.

Built in 1911, the old City Park Carousel has seen four different owners in more than a century. And it could have been lost completely to age and disrepair had it not been for a group of concerned citizens led by George Williams, who stepped in to oversee its restoration and preservation in 1957. That restoration work was completed in 1985.

Like the historic carousel at Lakeside Amusement Park, Pueblo’s carousel is a C.W. Parker model (#72) featuring 36 hand-carved horses, a chariot and a spinning “lovers tub,” all carved by master woodcarvers Solomon Stein and Harry Goldstein at the turn of the 19th century in a style reminiscent of the original Coney Island carousels.

In 1983 it was listed on the National Registry of Historic Places, and in 2018 it was renamed the George R. Williams Memorial Carousel.

It all began with a little black bear statue, a gift given to Spencer Penrose in 1916. The noted Colorado businessman and entrepreneur had no place to keep the little bear so he put it on display for guests at his world famous Broadmoor Hotel in Colorado Springs. As more animal acquisitions followed, Penrose decided to move his animal menagerie to the foothills southwest of Colorado Springs in 1926. That 140-acre tract then became the Cheyenne Mountain Zoo, which was recently voted as one of the top 10 zoos in the nation by USA Today. 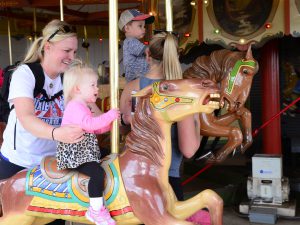 Visitors take a ride on the carousel at the Cheyenne Mountain Zoo near Colorado Springs.

In 1933, while visiting the Century of Progress Fair in Chicago, Penrose reportedly fell in love with an elaborately decorated carousel made by the Allan Herschell Company of New York. He negotiated with the owners for several years before they finally agreed to sell it to him. Penrose’s carousel started spinning in Colorado in 1937 and today remains the centerpiece of the Cheyenne Mountain Zoo.

Through grants from the History Colorado Center and the NCA, the carousel underwent two major restoration efforts: the first in 1998 and the second in 2015. Today it has been meticulously restored to its original condition and is listed on the Colorado State Register of Historic Properties.

ROYAL GORGE CAROUSEL
Available when the park is open

Daisy’s Carousel at the Royal Gorge Bridge and Park outside of Cañon City is not historic. In fact, the current carousel has only been in use since 2015. The previous one, which was added to the park’s playland in 1993, was destroyed in 2013 when a wildfire burned most of the park structures. 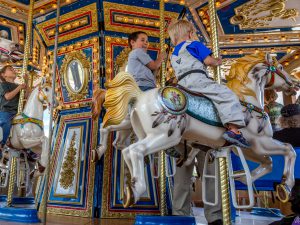 Children enjoy a ride on the Royal Gorge carousel located outside Cañon City.

As part of the rebuild, the new carousel, with its vintage look and sound, was purchased for the children’s play area. What makes this carousel unique is that it has some of the best views of any carousel in Colorado. Perched just back from the side of the Royal Gorge itself, the riders circle past views of the Royal Gorge Bridge, the gorge below and the Sangre de Cristo mountains beyond.

Each of these carousels and the other Colorado carousels all add a fun spin to summer outings. You’ll find a complete list of Colorado carousels on our website so that, when restrictions are lifted and we can all get back to exploring our state, you’ll have some destinations in mind.

Matt Vincent, a member of the Western Writers of America and a former editor for ESPN Outdoors, is a freelance writer and photographer who loves to explore Colorado’s northeastern plains and beyond.