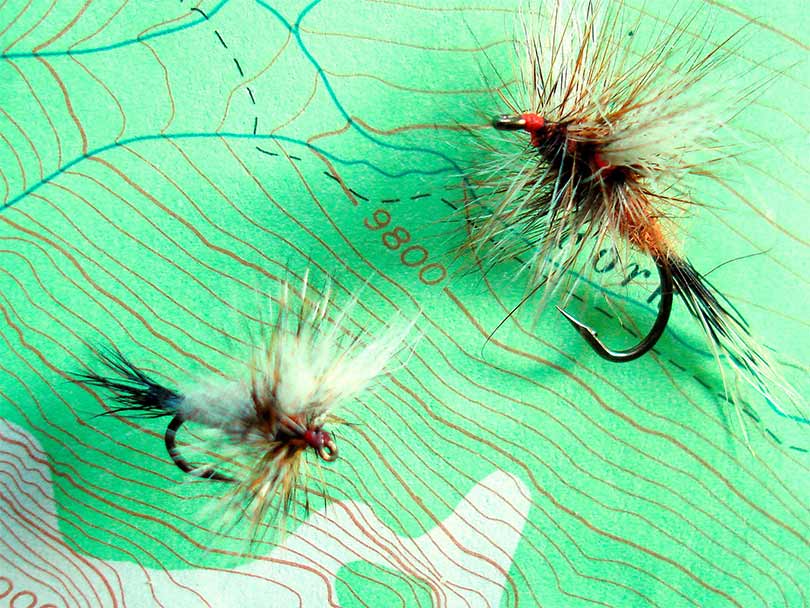 This is one of my favorite months to fly-fish the Colorado high country. By the time August rolls around, you can be reasonably sure if you hike into a cutthroat lake at say, 10- or 11,000 feet, you won’t have to drill a hole in it to catch a trout. You can also be fairly certain the streams up there will be in pretty good shape, too. Runoff will have been over for a while; the headwater creeks might even be a wee bit low but they’ll be martini-clear and the fish in them will be hungry. Trout in the high country are always hungry.

They’re usually wild, too, if not authentic natives. Depending on the watershed you fish, you may find river-born browns and rainbows among the various populations of cutthroats: Colorado River cutts, West Slope cutts, Rio Grande or maybe even native Colorado greenbacks. For sure you’ll hook brook trout. In fact, the brookies will probably outnumber all the other species by at least three to one. They’re an introduced and extremely invasive species. Release the cutts, browns and rainbows, but Colorado Parks and Wildlife encourages taking a limit of the invading brookies when you leave. They’re delicious and you’ll be doing the other fish a favor.

Dry flies rule up here this time of year and though fly selection varies from one fisherman to the next, you can bet the beer money almost every high-country angler will carry at least one Wulff pattern — probably two or three of them, in sizes 12 to16. The Royal Wulff is a universal favorite, and so is the H&L Variant or the “House and Lot” as some old-timers call it. The Western version of the Ausable Wulff tied with moose hair tails and a cream-colored fur body is popular with some Estes Park guides I know. I like the traditional Eastern version; it has woodchuck tails and a dyed, rusty-orange Australian ’possum body. Add a few light and dark elk hair caddis; a couple of ants, beetles, hoppers; and some midge patterns for the lakes, and you’ll have most of the bases covered. On second thought, you ought to carry an Adams or two. The standard version is fine, but the parachute version with the white, calf tail post wing is a lot easier to see.

A few years back I discovered a size 14 partridge and yellow soft hackle was an effective match for the little yellow stone flies and pale morning duns that hatch on my favorite headwater creek this time of year. Now, for obvious reasons, I never leave home without some of those. The same goes for a lightweight rain jacket. It’s not a fly pattern, I know, but it is indispensable for fly fishing the high country because, well, you know.