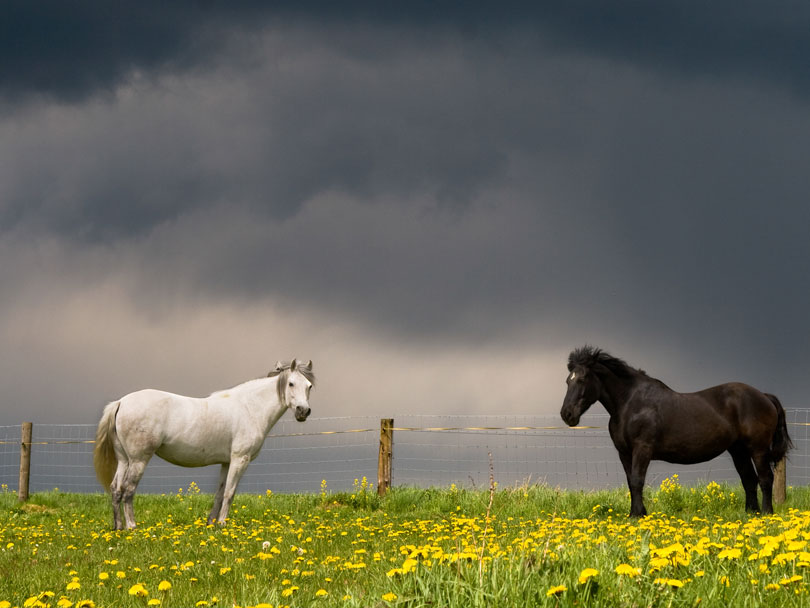 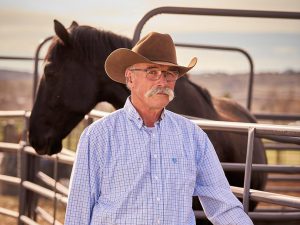 During tornado season equine veterinarian Bruce Connally, DVM, MS, remembers the EF3 tornado that touched down that caused so much damage in North Central Colorado on May 22, 2008. Photo by Dave Neligh.

“That cloud is terrifying!”

Abby’s hushed voice reflected the trepidation we all felt. The roiling, churning black cloud was an EF3 tornado, which had just torn a half-mile-wide swath through Windsor, Colorado. A frantic call from local farmer Gordon to the Colorado State University veterinary school was why three vet students, Abby, Don and Katelyn, and I were driving east toward the violent storm.

“The tornado went right over us,” Gordon panted into his cellphone. “We rode it out in the basement. The house isn’t hurt too bad, but I have one horse down in the alfalfa field and I can’t find the other one yet. I need you now!”

“I hope that thing keeps going north,” Don said from the back seat of the truck. Highway 257 was taking us east right along the back edge of the tornado. To our left we could see black clouds, constant lightning and sheets of rain as the monster churned over farmland and scattered houses. To our right the sun had emerged again and revealed the carnage caused by a storm with 135 mph winds. The cornfield beside us looked like a woven placemat with areas of punk rock hair.

Cottonwood trees were twisted into long yellow splinters or standing and pointing at the now-clearing sky with completely naked branches. There was muddy, brown water lapping at the edges of the county road that led to Gordon’s farm. The beautiful tan stucco house showed little damage; Gordon was waiting for us between a horse barn and machine shed that were not so fortunate. His black and white mare appeared to be resting in the alfalfa beside the mangled remnants of a center-pivot irrigation system. She attempted to stand as we approached, but was only able to get up on her front legs. Sheet metal from the barn roof had sliced through her rear legs, leaving them useless. After a short consultation with Gordon, I administered an IV solution that ended her suffering.

The vet students and I spread out to help Gordon search for his missing horse.

“Harold is a big black gelding that I team rope on,” Gordon told us. “I really like that horse,” he added, almost as an afterthought. We didn’t get to search for long.

“Are you the vet?” a woman’s voice called through the wind. “My horse got hurt in the storm.”

A woman in tall chore boots and a green slicker was running up the muddy driveway.

“My house is across the county road but you’re gonna have to walk ’cause the trees are down.”

“You better go help Linda,” Gordon said. “I’ll keep looking for Harold but I don’t think he is here.”

We drove the vet truck down Gordon’s drive to the county road. After moving several big branches and using four-wheel drive to get through the mud, we made it to Linda’s road. There, a huge fir tree had been snapped off, covering the road and her metal gate. The students grabbed surgical equipment, a stainless steel bucket and drugs. We crawled through the top of the fir tree and over a wooden fence into Linda’s yard. Her house and barn were completely intact. The only signs of a storm on this side of the downed fir tree were lakes of muddy water and a nervous bay Arabian mare tied to the fence with a bloody T-shirt wrapped around her front leg.

“I got the bleedin’ stopped but she’s pretty shook up,” Linda cautioned.

My vet student team, fueled by adrenaline, sprang into action. In 20 minutes the mare was sedated, the wound cleaned and sutured and a bright purple bandage replaced the bloody shirt. Linda’s cellphone rang as the students wrapped the leg.

“My neighbor on up the road,” Linda explained. “She says her horse is hurt bad.” 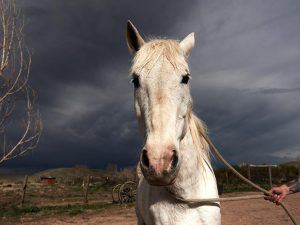 Storms can frighten horses, including Trooper (above) as he heads in as recent dark clouds approach Bear Creek Stables in Morrison.

There were power lines down across the road so we couldn’t drive up to the big yellow house. Carole met us and led the rest of the way on foot. Only the west wall of a log barn was still standing: The rest of the barn was nowhere to be seen. The dark clouds were gone now, allowing a strangely reddish afternoon sun to shine through a window in the remaining wall and down on to a palomino Shetland pony. The pony was not hurt but the big chestnut warmblood gelding on the other side of the corral was not as lucky. He had a bloody wound on his left side behind his elbow that was as big as the top of my hat. The skin and muscle were completely missing. Sand and dirt mixed with the clotted blood. The three massive ribs that were exposed had been strong enough to repel whatever the tornado had tried to drive into the big horse’s heart.

“I’ll sedate him,” I told Katelyn, the quietest of the three vet students. ‘’You get a big syringe and start lavaging the sand out of the wound.” In 15 minutes the wound was clean enough to evaluate.

“I think he was very lucky,” I told Carole. “The ribs are intact and there does not seem to be any penetration into the chest cavity.”

“Thank goodness!” Carole replied. “Now if we can find our dog everything will be OK. He disappeared during the tornado and hasn’t come back.”

As Katelyn finished with the wound and Don administered an antibiotic, my cellphone rang.

“Bruce, this is Steve, your neighbor. The tornado just went through your place. I don’t know how much damage you have, but your new foal is out on the county road.”

We threw everything in the truck and navigated the treacherous roads back to Interstate 25. The fear in my heart made me drive a little faster than the speed limit north toward my home. As we pulled into the drive I could see the 12-by 24-foot metal shed where the mare and 8-day-old foal had been kept was gone. All seven of my horses were standing unusually close together in the larger corral.

“We got the foal back into this pen with the others,” Steve explained as I jumped out of the vet truck. “None of the fences are down so I think the tornado picked the little feller up and put him out on the road.”

A quick inspection showed that my five saddle horses were not hurt. The foal had a swelling on his knee but was walking fine. His mother had some minor cuts on her chest where she had apparently tried to get through the fence to her baby.

We were back at Carole’s house the next day treating the chest wound on the big warmblood. Katelyn was flushing the wound and I was using gauze to remove the remaining sand. As we worked, a Chesapeake Bay retriever trotted into the corral and sniffed the bloody gauze on the ground.

“Jake, you’re back!” Carole screamed. “Where have you been?” The big dog seemed a little tired but completely unharmed from the ordeal.

“Must have been a long walk,” Don commented.

Gordon was giving me an update a couple days later. “We found my big black horse. He was in a hayfield about a half mile from home. All the fences were up and the gates closed so I think he learned to fly! I don’t think Harold likes to fly though because now when the wind blows he runs into the barn and stands there trembling.” 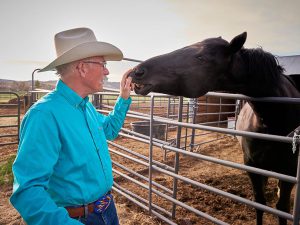 Veterinarian Bruce Connally, DVM, MS, visits his horse at his home near Berthoud

The devastation from the tornado was amazing. One man lost his life. Many people lost homes and animals. The cost to the community was in the millions of dollars.

“I haven’t named my foal yet,” I told the students as we drove back toward the vet school. “Maybe I will call him Twister.”