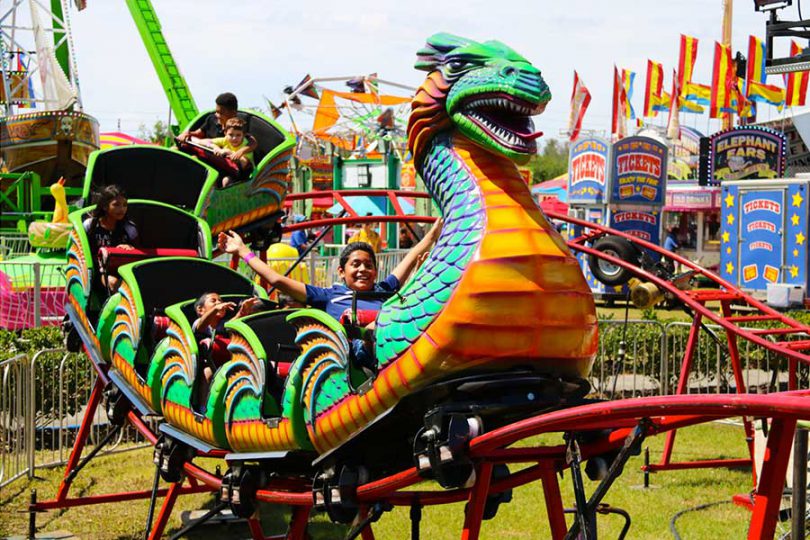 As the fifth-generation owner of a family-run business that helps people have fun, Jared Davis is one of those fortunate people who wakes up in the mornings loving his job. 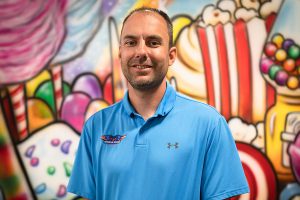 “This is my childhood. I grew up with my grandfather introducing me to the business, and that’s where my passion comes from,” said Davis, president of Wisdom Rides of America, located in the small town of Merino.

Wisdom Rides has manufactured kiddie, family and thrill rides in northeastern Colorado since 1969 and remains one of the leaders in the industry for rides for amusement parks, carnivals and family entertainment centers.

Starting in fourth grade as a helper for his grandfather, Jerry Wisdom, the first task for young Davis was changing lightbulbs in rides. Davis grew up working after school at Wisdom Rides. He’s worked many positions in the company through the years. After leaving for a few years to try other jobs that did not generate the same passion for him, Davis began working full time at the family business at age 20.

Davis acquired the company in 2018 from his uncle, Victor Wisdom, who retired from overseeing the operations with his wife, Mai, and his sister Carol Wisdom-Silvey. 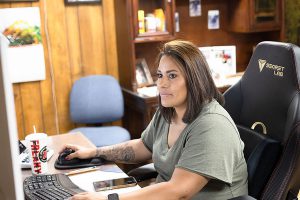 “I wake up every morning loving what I’m doing because I’m working with our customers who are the best in the world. They are all family-oriented,” said Davis, 35, whose wife, Rachele, serves as vice president at Wisdom Rides.

A FAMILY BUSINESS
The origins of the amusement ride company date back more than a century to circa 1908 when previous generations of the family operated a traveling carnival business. Through the decades, the family improved on the time and labor needed to take down and set up rides, and Jerry Wisdom later turned those innovations for moving trailer-mounted carnival rides into the successful company in Logan County.

Now, at the 70,000-square-foot manufacturing facility in Merino — population 281 and located 12 miles southeast of Sterling — employees manufacture 45 rides made of steel, aluminum and fiberglass. Wisdom Rides also partners with other engineering and design firms and is expanding its product line to 158 unique items, Davis said. 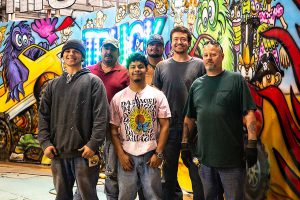 The oldest ride still in production at the Merino facility is the long-time thriller Gravitron, which has been upgraded and re-themed but still uses centrifugal force to float passengers off the floor for a feeling of weightlessness. The bestseller is the family ride, the Tornado, where passengers can spin the cars themselves while the ride cars lift and tilt.

The company’s newest ride, introduced to the market in February, is a 65-foot-tall Ferris wheel with a price tag of $550,000, Davis said. The mid-sized Ferris wheel can be disassembled and racked in 90 minutes by two employees, compared to comparable products that takes four people five hours to rack and be ready for travel.

“It’s the first thing in the industry that people have been excited about in probably 20 years. It’s new and innovative. It’s addressing every key concern our customers have for labor shortages,” Davis said.

Wisdom Rides also builds smaller 35-foot Ferris wheels that are popular for purchase by party rental companies. Two workers can set up the ride in 45 minutes.

The company designs and builds portable and permanent rides, repairs and refurbishes older rides, and has branched out to build agricultural equipment such as a new haystacker.

“Through COVID, we did a massive diversification. It was based off of survival,” Davis said. “Basically, when everybody else says no, we say yes, typically, and get the job done. What we do is very customized.” 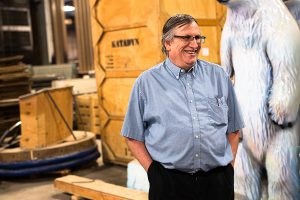 Just as the company ownership has stayed within the family, employees at Wisdom enjoy the family atmosphere, and some stay with the company for decades. One employee recently retired after 46 years, and Mark Tonsing, accounts receivable manager, has worked there 42 years.

“I came out here for a summertime job,” Tonsing said. “They needed somebody to do some costing on some rides. I had just completed my associates degree in accounting and administration, and I never left.”

Calling himself a jack of all trades on the office side of duties at Wisdom Rides, Tonsing started working for the current owner’s grandparents, Jerry and Elaine Wisdom, whom he called “two of the nicest people you could ever meet.”

Jerry Wisdom, who died in 2003, was a former college football player who was known as a big man with a big heart. A city park in Sterling was named for him, and he was also posthumously honored with an Outdoor Amusement Business Association “Industry Pioneer Award” in 2011.

“I will never forget that man, how he stood by us and helped us through some difficult times. He was a true gentleman in every aspect of business,” Fred McDaniel of McDaniel Brothers Shows in New Jersey said of Jerry Wisdom.

McDaniel has worked in the amusement business for 37 years, owns six rides made by Wisdom and has a 65-foot Ferris wheel currently on order. McDaniel said it has been a pleasure to work with three generations of Wisdom Rides owners, including Jerry Wisdom, Victor Wisdom and Jared Davis, calling them “down-to-earth and goodhearted people.”

“They are a top-notch family and great people to work with,” McDaniel said. “Jared is coming up with a lot of great ideas. He is continuing in the family tradition of being easy to work with and standing behind their work.”

Through the years, Wisdom Rides has built a wide variety of other original products for various companies such as displays for trade shows, custom advertising displays for major brands, and interactive street signs, Davis said.

MULTI-TALENTED STAFF
The staff at Wisdom Rides is filled with multi-talented employees including artists. To create a new design for an amusement ride’s display, an original mold is carved by hand out of wood or foam, and then a fiberglass mold is made. Then sheets of plastic are heated and laid on top of the three-dimensional fiberglass mold and placed in a vacuum tank that sucks the air out from between the fiberglass and plastic. 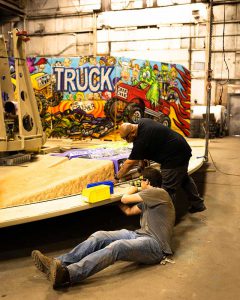 Work on a new ride continues inside a warehouse in the small town of Merino in northeastern Colorado.

The busy, well-equipped and well-organized manufacturing floor usually has up to eight rides in production. Customers normally order a year in advance, and the rides require six to eight months to manufacture. The crunch times for Wisdom Rides are winter and spring when employees are working toward completing and shipping orders before June 1, when carnival season goes into full swing.

On a Friday afternoon tour around the large manufacturing facility, the workplace is much quieter than normal because most of the employees usually take Friday afternoons off after working a long week. A team from Wisdom is getting ready to fly to Nigeria the next day for an installation. A Silverstreak Ride with a Music Express theme is almost ready to be shipped to St. Thomas. However, most of the company’s customers are in the U.S. and Europe.

The company, located on a 15-acre campus, makes most of the ride mechanisms but orders in tires, axles, electronic components, motors and gear boxes. Supply chain issues during the COVID-19 pandemic have been Davis’ biggest headaches. Items with electronic sensors or that require computer chips have been a struggle to get. Prices for steel, aluminum and hydraulic components have also increased dramatically.

Davis walks through the building wearing a white ball cap with a big red M on the front representing the town of Merino, for which he has served as mayor and a volunteer firefighter. The manufacturing space reminds guests of a series of interconnected airplane hangars, including some with ceilings up to 35 feet to accommodate the large rides. Davis points out specialized manufacturing equipment ranging from a plasma cutter that can slice through 3-inch steel to an 80,000-pound press break machine that can bend metal.

Even though it is Friday afternoon and supposed to be slower at the office, Davis excuses himself from the conversation to get back to work. He has a short line of people standing outside his office door waiting for his amusement expertise.

Employee shortages are plaguing Wisdom Rides, like they are for much of Colorado. Currently at 40 to 50 employees, Davis said he would love to double its workforce, including more workers in fabrication, assembly, electrical, administration, purchasing and warehousing. The company trains employees for jobs, and employees who work there usually live in Merino, Sterling, Fort Morgan and Brush.

DEDICATED TO FUN
Currently, the company’s business is about 70% portable amusement rides, 10% park or non-portable rides and 20% ride refurbishments. Even though Davis is decidedly and openly non-corporate, his business plan for next year is ambitious and could double and diversify production, depending on supply chain issues.

The fifth-generation business owner said the best part of his job is seeing the completed rides being appreciated by the public: “Seeing the end of the process, the product being enjoyed, that’s the best part for me.”

The names of the rides made by Wisdom sound like pure fun, with thrills and maybe a little queasiness added in the mix. Some of the rides include Spinning Coaster, Frog Hopper, Sizzler, Dive Bomber, Dragstrip, Raiders, Renegade, Squadron, Viper, Whirlwind, Windsurfer and Y Factor.

“I love them all. I do not have a favorite; I really don’t. I appreciate the craftsmanship that goes into each product,” Davis said.

Tonsing, who stays away from the spinning rides now that he is in his 60s, said most of the employees have a love of carnival rides. Testing the products is one fun perk of the job.

Employees on their travels often seek out carnivals in the field to watch their work in action and see the smiling faces of people on the rides. As Tonsing noted, “Everybody likes to watch people enjoy themselves.”

Suzie Romig is a freelance writer from Steamboat Springs with 30 years of experience exploring the state of Colorado and elsewhere.