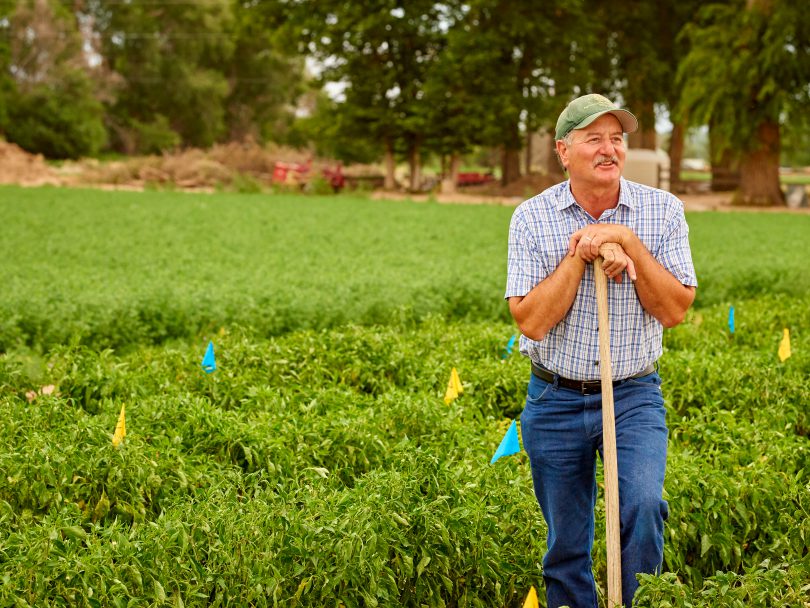 Pueblo chile or Hatch chile? The debate heated up over the summer when Colorado Governor Jared Polis called Hatch chile from New Mexico inferior to Pueblo chile. This came after grocer Whole Foods Market announced that Pueblo chile would be sold exclusively in its Colorado, Idaho, Kansas and Utah stores. 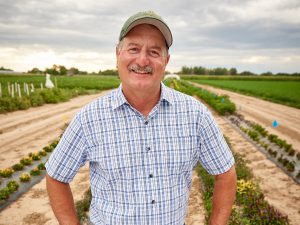 Dr. Michael Bartolo, the man who developed the Pueblo chile, is thrilled with the Whole Foods opportunity for the Pueblo chile farmers. But the idea of Hatch chile being inferior to Pueblo chile? He shakes his head and says, “They are comparing apples and oranges. But it stimulates pride in the Pueblo chile. It’s more than a crop to the growers and the community. It is a cultural tradition.

“The Pueblo chile and the Hatch chile are two completely different varieties of chile peppers,” explains the man who chooses to be the voice of the unbiased. “The Hatch chile is the milder, long, green Anaheim chile. The Pueblo chile or the ‘Mosco’ has a different flavor from the Hatch chile. It tends to have thicker walls, which make it more amenable to roasting, and it has a little more heat. It really comes down to personal preference and how you use it.”

Bartolo is the senior research scientist and extension vegetable crops specialist at the Colorado State University Arkansas Valley Research Center in Rocky Ford. A Pueblo native, Bartolo grew up on a small farm. His father did some farming while working other jobs and his uncle, Harry Mosco, raised Mira Sol chile and other produce on a larger farm next door. When it was time to go to college, CSU made sense to him. “I enjoyed agriculture and science. CSU was a natural place to develop those interests and gave me the latitude to try new things,” he says.

After graduating from CSU with a master’s degree, Bartolo obtained his PhD in plant physiology in 1990 from the University of Minnesota. Returning to Colorado, he began working for CSU at the research center in Rocky Ford in Southeast Colorado Power Association’s co-op service territory, which put him in the right place at the right time when a sack of Mira Sol chile seed was given to him.

“Traditionally, a lot of the farmers in the Pueblo area saved their own seed,” Bartolo says. “My Uncle Harry saved his Mira Sol chile seed every year. After Uncle Harry passed away in 1988, my dad helped his sister, Aunt Helen, clean out the garage and found this sack of seed that he gave to me. I had just started working for CSU in Rocky Ford and decided to plant some of the seed in the test plot because I had a couple of extra rows,” Bartolo says with a laugh. 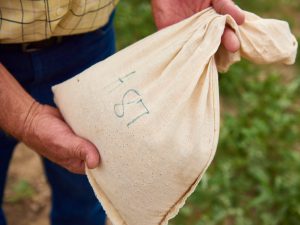 After several years of planting his uncle’s chile seed, Bartolo noticed a unique plant in 1994. “It was a little bigger, a little thicker, but it still had the general characteristics of the Mira Sol. Perhaps it was outcrossed or a bit of a mutation? I saved the seed from that individual plant and used single-plant selection over the next three or four years by growing out a population and selecting the best single plant out of the population and planting its seed the next year. Then I knew I had something different, something unique and stable. And that is the origin of the Mosco.”

The Mosco chile, which he named after his Uncle Harry, became the predominant chile raised in Pueblo and the Arkansas Valley over the past 15 years, and is commonly known as the Pueblo chile. The Mosco has a thicker flesh than most chile peppers. This allows it to be roasted, have the skin removed and still have more “meat” and texture left. It is also hot. The heat of the Mosco chile sets it apart from Hatch chile, rating 5,000 to 20,000 units on the Scoville scale, which is used to rate the pungency of chile peppers. Hatch chile rates at 500 to 1,000 units. The hot, dry summer days and cool nights, the rich soil on the St. Charles Mesa and in the Arkansas Valley, along with Colorado’s Rocky Mountain water, all contribute to a chile pepper bursting with flavor and consistent heat.

Bartolo estimates he has had 400 selections over the past 25 years from the original plant. While walking through the test plot at the Arkansas Valley Research Center, he explains, “I kept selecting unique plants, most of them duds, but some have worked out like the Mosco.”

He stops talking and leans over to look at a Pueblo chile plant. He touches the leaves and studies the plant intently before remembering he is in the middle of an interview. “Sorry,” he apologizes with a grin as he stands up again. “These are my babies and when something looks a little off, I just have to check on it.” 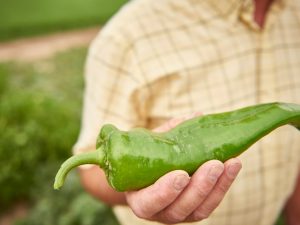 Other varieties developed out of the Mosco strain by Bartolo include the Pueblo Popper chile, which also grows upright and has a round shape that can be stuffed, and the Giadone chile, which was introduced at the Pueblo Chile & Frijoles Festival in 2018. The Giadone is named after Pete Giadone, a Pueblo farmer who was one of the founders of the Pueblo Chile & Frijoles Festival and the man who built the first chile roaster for the festival. The Giadone chile is similar to the Mosco, but is much hotter.

According to Bartolo, the Pueblo chile is primarily grown on the St. Charles Mesa near Pueblo in the Vineland and Avondale areas, and along the Arkansas River in Otero County. But it is also produced in northern Colorado. The growing season isn’t as long, but it can be grown from transplants.

“By and large, most of it is grown in Pueblo County because of the longer growing season and the ready market for the Pueblo chile,” he says.

The chile pepper in Colorado is most often associated with the Hispanic culture. However, you may have noticed the names associated with developing and growing the Pueblo chile tend to be Italian.

“My grandparents were Italian-American farmers who migrated to the Pueblo area originally to work in the mines. They saved their money and bought a small truck farm like many other Italian-Americans did in the area,” Bartolo explains.

“There are so many foods from different cultures that use peppers and some have a real sentimental value, whether it is the green chile in the Hispanic culture or the seasoning for sausages in the Italian culture. Peppers are incorporated into so many foods.”

Bartolo believes the chile peppers became a metaphor for Pueblo because chile became integrated into the cuisine of so many cultures. It is the direct result of the people who migrated to Pueblo to work in the mines and steel industry, creating a multiethnic community.

“Peppers are like dogs: there’s every size, shape and everything you can imagine!” he says. “It’s weird how they resonate with so many people for the cuisine, and that’s what adds to their popularity.”

Chiles originated in Mexico, made their way into New Mexico and began to be grown in Pueblo County in the early 1900s. The families of some of the early farmers are still growing Pueblo chile, including the DiSanti family, which started farming on the St. Charles Mesa in the 1890s. Other multi-generational families include the Mauros and the Mussos.

“We also have some new people growing Pueblo chile,” Bartolo says. “Shane Milberger started farming when he leased a plot of land while he was a sophomore in high school in 1986 and today his son Dalton is also farming with him.” Dalton, 24, is the president of the Pueblo Chile Growers Association.

“We have some very skilled growers; it’s amazing to see the quality of the peppers they are growing,” Bartolo says. “And that has added to the popularity of the Pueblo chile. I am encouraged to see the younger generation involved. We need to do more to encourage the younger generation to be involved in agriculture. Growing Pueblo chile is an opportunity with a higher-valued crop where you don’t need much land. You can start off with a smaller acreage and get some type of return off that.”

“Seeing these growers work together is a great thing!” Bartolo says. “Traditionally, growers are very independent — they want to do their own thing — and seeing them work together on something they are very competitive at is a huge, monumental change.”

Every year people converge on Pueblo the third weekend after Labor Day to indulge their pepper cravings, taste a variety of foods using peppers and inhale the aroma of roasting Pueblo chile. The event started with conversations on promoting Pueblo chile over 25 years ago between Bartolo and Rod Slyhoff, president of the Greater Pueblo Chamber of Commerce. 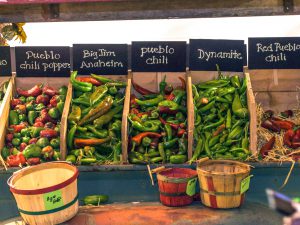 A collection of chiles can be found at the Pueblo Chile & Frijoles Festival in Pueblo.

“Rod has been a really great champion for Pueblo chile,” Bartolo says. “He grew the festival from a very modest event to now having over 100,000 people attend. The people like to eat Pueblo chile and there are lots of fun things to do like jalapeño-eating contests and cooking contests. It connects so many people to the Pueblo chile and various foods.”

Bartolo is passionate about connecting people in Colorado to the food they eat. “People want some connection to their food. We see it in the farm-to-table movement. They want to know who the farmers are and where their food comes from,” he says. Then he pauses a moment before continuing, “I think there is a longing in this state as we’ve become more urbanized and disconnected. We’ve lost a part of our soul by being disconnected from the land and from our food source. And people are beginning to realize we’ve lost something in that quest for growth. The festival is one way to connect people to the food, the farmers and the land.”

And it’s a great place to continue the debate over which is the best chile. Although, Bartolo, the man who started it all, is still working on new chiles that could challenge today’s winners.

“All of these strains originated more than 30 years ago from that original bag of seed I got from Uncle Harry. He was a modest, unassuming man who served in World War II,” Bartolo says.

“You know, I still have that bag of seed. It’s a plain cotton sack with H87 written on it — ‘H’ standing for Harry Mosco and ‘87’ for the year he grew it. There is still some seed in the bag and, every once in a while, I will take some out and see if it will grow.”

Who knows what new chile strain might be next.

Gayle Gresham writes from her home in Elbert. Her favorite meal is chile rellenos topped with Pueblo green chile.