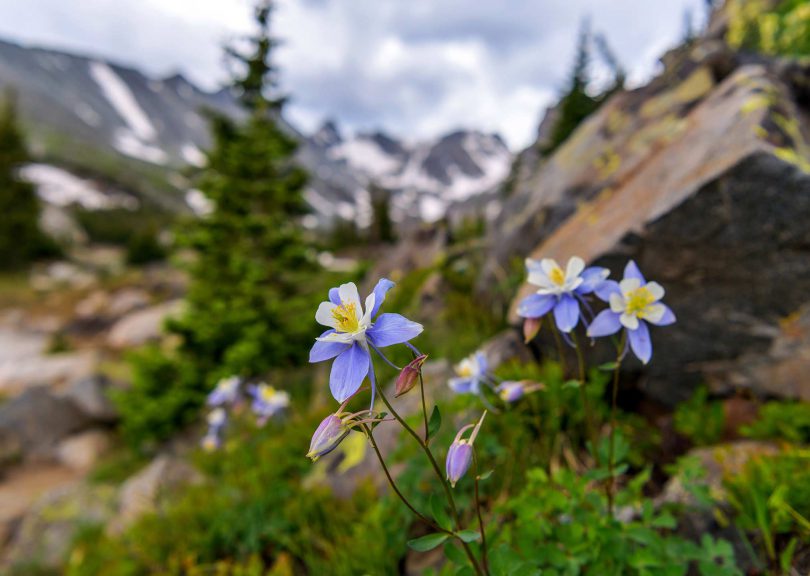 The comely Columbine is a common staple when exploring colorful Colorado.

I hope you’ll excuse me.

I started to write a column about how, by the time you read this, the U.S. Congress will have passed the “Inflation Reduction Act of 2022” (IRA). This is a piece of federal legislation that contains many provisions that potentially benefit Colorado’s electric cooperatives.

After all, as the executive director of CREA, part of my job is to support state and federal legislation that will help our electric co-ops. It looks like the IRA will provide funding for programs such as direct payments to co-ops working to transition away from fossil fuels, tax credits for electric vehicles and even funding for the National Renewable Energy Lab in Golden.

But as I was trying my best to summarize this 755-page bill and, frankly, questioning whether it would indeed reduce inflation, my mind started to wander. You see, earlier this summer I completed one of the items high on my Colorado bucket list: the hike from Crested Butte to Aspen on the West Maroon Trail during wildflower season. (While technically the trail starts at the West Maroon Trailhead and ends in the Maroon Bells trail parking lot, in general, the hike is from Crested Butte to Aspen.)

I would not normally use this space as a travelogue, but in the 38 years I have lived in Colorado, this 10.5-mile hike is the most “Colorado” thing I’ve ever done. I’ve hiked lots of fourteeners exploring colorful Colorado and fished many mountain rivers and streams, but when you think of Colorado scenery, what do you think of? Wildflowers? Forests primeval? (Thank you, Dan Fogelberg.) Crystalline lakes and streams? Snowbanks? Dogs? This hike has them all (assuming you bring your dog, as I did).

Ella the border collie and I caught a 6 a.m. shuttle van from a B&B in Crested Butte to the West Maroon trailhead north of Gothic. (My dear wife would make the long drive around and pick us up at Aspen Highlands later in the day.) Ella the border collie, being an antisocial sort, was glad to exit the van filled with other hikers, even in a steady downpour. Hoping that the rain would let up and starting out fast to get ahead of the other trekkers, we charged up the trail that leads to the summit at West Maroon Pass.

The rain quickly subsided and, after a half-mile or so of uphill hiking, the scene that unfolded in those mountain meadows was simply breathtaking. If you’ve seen the many iconic John Fielder photographs of the Colorado backcountry, you get the idea.

As we continued exploring colorful Colorado, we could see wildflowers blanketing the foothills from one horizon to the other: Colorado blue columbine, red Indian paintbrush, purple bluebells, silvery blue lupine, Rocky Mountain bee plants, subalpine larkspur, yellow black-eyed Susans, Maximilian sunflowers and dozens of additional varieties I could not identify. All these wildflowers were framed against a backdrop of snow-capped mountain peaks, rushing mountain streams and pine forests, with not another human in sight. Paradise for man and, especially, beast.

We continued up the trail to the summit of West Maroon Pass (12,386 feet) where we “pawsed” for a snack. (Sorry.) I had one of those delicious trail bars that taste slightly better than the cardboard container they’re packed in, and Ella had a beef tenderstick (which cost considerably more than my trail bar and looked a lot more appetizing).

By this time, a lot of hikers were coming from the other direction, so I put Ella back on the leash since she is an incorrigible herder, meaning she likes to gently nip people on the backs of their ankles.

We headed downhill to complete the last 6 miles of the hike, stopping periodically to let Ella roll around on snowbanks and cool off in mountain streams. Along the way, we noticed something very peculiar: In our world of generally grumpy, stressed-out people, every hiker or group of hikers we approached was either laughing or smiling. Colorado still has that magic.

We finished the hike at the base of the spectacular Maroon Bells and caught a shuttle bus back to Aspen Highlands.

While there are no electric co-op facilities in the Maroon Bell-Snowmass Wilderness, electric co-ops serve the communities at both ends: Crested Butte and Aspen. I can therefore say with a straight face that, while this hike may have seemed like just a vacation, I was hard at work exploring colorful Colorado in co-op service territory. Hope you can too!

Kent Singer is the executive director of CREA and offers a statewide perspective on issues affecting electric cooperatives. CREA is the trade association for all of Colorado’s 21 electric distribution co-ops and one power supply co-op.