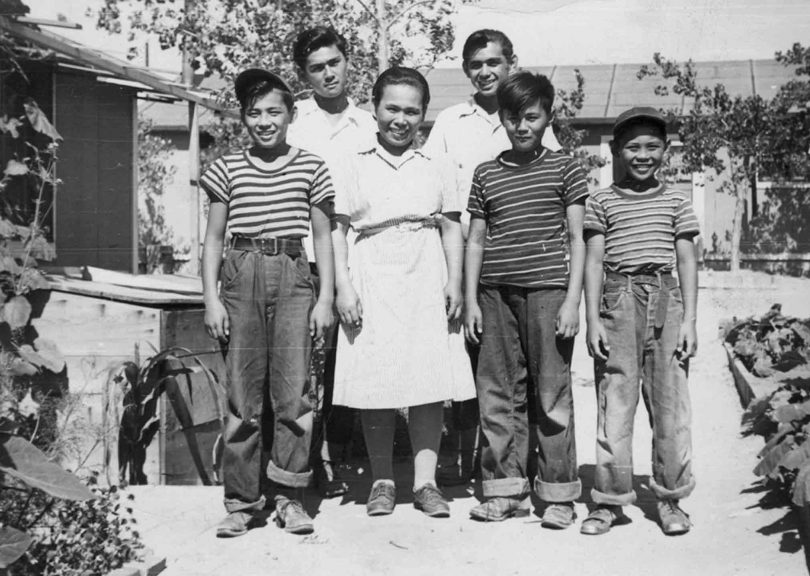 The Hirano family in their Block 8F garden. Photo courtesy of George Hirano.

Imagine being uprooted suddenly from your home and relocated to an unfamiliar, distant location without any idea of what the future may hold. How would you react? Where would you find comfort?

Author Bonnie J. Clark suggests that archaeological research can contribute to our understanding of how people of Japanese ancestry, forced to leave their homes for the Amache incarceration camp during World War II, found solace in gardening.

At its peak, Amache housed over 7,000 people — two-thirds were American citizens — in a barracks-style camp surrounded by barbed-wire fencing and guard towers. Located on a square mile of sandy, livestock grazing land near Granada, Colorado, it was an inhospitable environment for most of the inmates who came from productive agricultural areas along the West Coast. Consequently, these internees immediately used their varied skills to build a town.

Since blowing sand was a pervasive annoyance, barracks were uninviting as residences and wartime meals were short on fresh vegetables customary to the Japanese diet, it is no surprise that internees were enthusiastic about planting gardens. Most impressive is how the people joined together to transform forced incarceration into a tolerable situation.

In her recent book, Finding Solace in the Soil, Clark explains how she used historical records, interviews and pedestrian surveys to map locations of Amache’s gardens. Then she used other archaeological techniques to provide insight into the transformation of the land.

Soil samples revealed visible pieces of plants and stems, and chemical analysis in the laboratory revealed that eroded soil was amended by bringing rich soil from the Arkansas River. Although people dug up trees and shrubs from along the riverbed, other trees were purchased from local nurseries. Shade trees lined the barrack streets to break up the intense summer heat, and vegetable gardens were planted outside barrack doors for protection and easy access.

Entryways and public gardens were designed according to traditional Japanese principles honoring the natural world. One strolling garden beautified the bleak military barracks with an artificial hill and figure-eight-shaped lake adorned with rounded stones from the Arkansas River. These features were joined by a curved wooden bridge. Concrete from pouring the barrack foundations was used to create “standing stones” that were placed in the lake with plants to create islands.

Photographs reveal creative use of materials available during wartime rationing. Homemade birdhouses were attached to hand-carved wood posts with scraps of tin cans. Other yard art provided a bit of whimsy (just as they do today).

You can learn more about the gardens by visiting the Amache National Historic Site, also known as the Granada Relocation Center, which is stewarded and maintained by the Amache Preservation Society. The site consists of a cemetery, a monument, building foundations, landscaping and interpretive panels. No reservations are necessary for this open site.

Since southeastern Colorado’s high plains are subject to extreme summer heat, fall or early winter might be a good time to visit as long as there isn’t any snow. Check the website for current conditions as rattlesnakes may be present and require precautions.