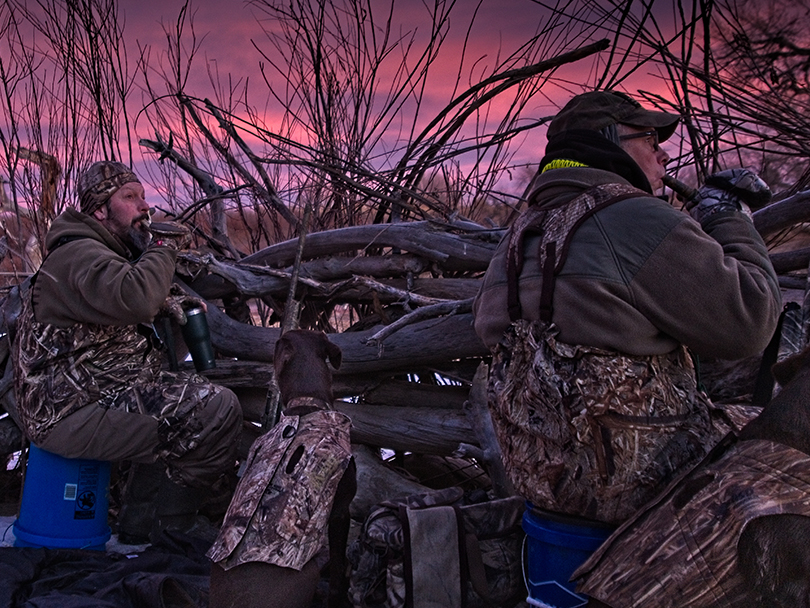 It’s a half-hour before legal shooting light on a bone-cracking cold December morning. Hoarfrost glistens from every twig, leaf, branch and blade of grass in the creek bottom, the stars have faded and the last inky-black remnants of night are retreating from the sky. Dawn is a soft, glowing tapestry of salmon-colored streaks on the eastern horizon, and the two Labrador retrievers at our sides are shivering with excitement at the far-off whistle of wings only they can hear. Gun dogs can sense the presence of ducks long before hunters ever see them — a mysterious canine ability that never fails to amaze us.

My sons and I are hunkered down behind a makeshift blind of fallen cottonwood boughs thicker than a bull elephant’s trunk. Weathered gray, and brushed in with coarsely woven branches of alder and switch willow, the thing looks like an overgrown pile of rotted logs, bank rubble and creek flotsam. We’re straining our eyes against the dawn searching for the ducks the dogs have warned us are coming. We see nothing but sky. Silly dogs.

Then suddenly, out of nowhere, a flock of green-winged teal buzz the blind like a squadron of miniature fighter jets, brake sharply and pitch into the decoys. The dogs were right. Again. Of course, they were; they’re always right. Unfortunately, we can’t shoot because legal shooting light is still 15 minutes off. The dogs whine and scowl their disappointment as if to say, “How come you jerks didn’t shoot?” Their frustration is palpable.

Apart from the often ridiculous, never-the-same-thing-twice beauty of a prairie sunrise or the fascination of watching hunting dogs at work, the inevitable wildlife drama that unfolds around a duck blind at dawn while the woods and creek bottoms are waking is a continual source of wonder and entertainment to anyone who’s paying attention.

On our duck hunts over the years, we’ve watched great horned owls and red-tailed hawks catch birds and rodents in the cottonwoods; seen golden and bald eagles soar overhead; and watched harriers and goshawks hunt the marshes for muskrats and voles. We’ve seen great blue herons spear shad and bluegills, and watched belted kingfishers dive for minnows on the Platte and ospreys snatch carp from duck ponds.

We’ve listened to coyotes howl at dawn and witnessed them stalking prairie dogs in pastures across from our blind. We’ve seen white-tail deer and their fawns sneak out of the cornfields to bed down in the woods nearby, and just recently watched a small flock of turkeys scratch their way through the woods behind our blind, yelping and clucking quietly all the way.

That’s not even the half of it. Sometimes we actually shoot a duck or two, just to keep the dogs happy, you understand, but usually we just sit quietly, sip coffee and watch the wild.