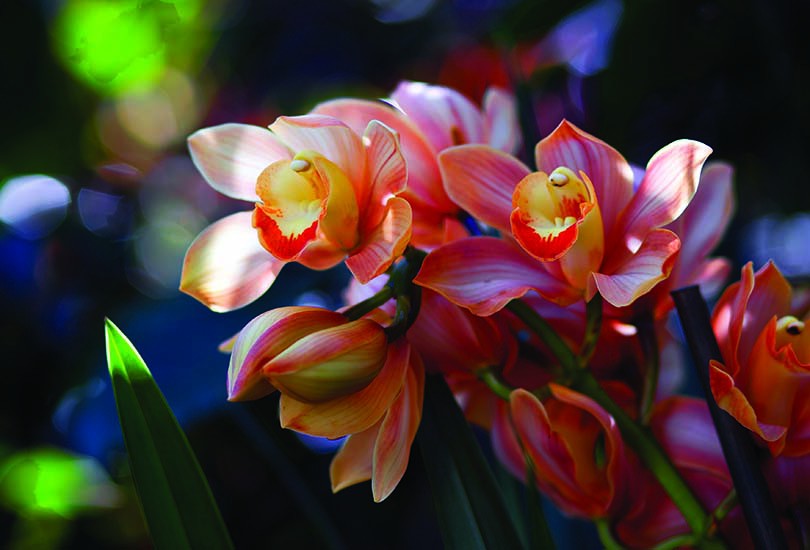 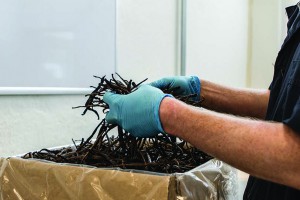 For bakers and chefs, and really anyone who loves and reveres that magical spice we call vanilla, Santa’s workshop might as well be planted on the south side of Fort Collins.

Inside these unassuming walls, tens of thousands of vanilla beans are processed every day by Rodelle, Inc., an 80-yearold baking product manufacturer renowned for its superb products that are preferred by culinary professionals and loyal home cooks.

The richly fragrant, exotic pods making their way along Rodelle’s production line primarily hail from Madagascar, Uganda and India. Rodelle is one of the country’s largest importers of vanilla beans and producers of retail vanilla, processing 20 percent of the world’s beans. Anyone familiar with the brand knows Rodelle’s vanilla products are among the best on the market.

“We want to provide the purest ingredients for the best prices with the best quality,” said Jenna Baker, Rodelle marketing manager. “There are a lot of different competitors out there. We distinguish ourselves by providing a product people can trust.” 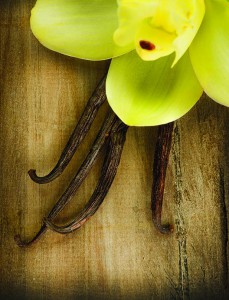 That commitment to quality and trust has deep Colorado roots. Rodelle landed in Fort Collins by way of Denver and the south of France, having been founded by the French Rodelle family after its members immigrated to Denver in 1936. Yearning for the high-quality vanilla extract they knew in their home country, the family of avid bakers soon began producing its own premium extract. The highly successful business serviced wholesale bakeries across the country for nearly 50 years.

Rodelle changed ownership in 1984 and, not long after, relocated to Fort Collins. The company’s first retail bottle of vanilla extract was produced in 1985, and it focused on growing that market ever since.

While it offers more than 50 products, ranging from lemon extract to baking cocoa to a brisket spice rub, Rodelle’s premium vanilla products are its most familiar. They can be found in 70 percent of all North American grocery stores and online at Amazon.com. In Colorado, look for

Rodelle products in King Soopers and City Market, Costco, Whole Foods, Target and Natural Grocers. Rodelle’s commitment to producing superior vanilla products, along with its unique vision and philosophy appears to be a recipe for success. Last year, Rodelle expanded its Fort Collins operations, giving it the capability to produce the highest quality pure vanilla extract in the United States, according to Baker. The 65,000-square-foot headquarters is the country’s most state-of-the-art vanilla extraction facility.

Part of the expansion even included the construction of a vanilla testing laboratory. One key lab test measures vanillin content, the flavor component that gives vanilla its one-of-a-kind flavor. The best extracts have high levels of vanillin.

“Being able to scientifically track each step of the vanilla bean crop from flower to cured bean to extract leads to a better quality product, a more consistent product and ultimately a higher yield of product,” said Devon Bruntz, research and development manager.

Today, 65 full-time employees keep Rodelle bustling, and that number swells with temporary help from August to October in preparation for the busy holiday baking season.

“The most rewarding part has been seeing our Rodelle family of employees grow over the years,” said co-owner Joseph Basta. “We’ve expanded our number of employees 10 times since 2000, and it’s been great to be able to provide wonderful jobs and opportunities for our employees to advance in the company.”

Rodelle cares… year-round
At a time of year when most folks seem a little kinder, a little more caring, it’s notable that at Rodelle, a giving spirit is in the air year round. Its leadership team is creating an unprecedented connection with its primary suppliers, which are families of farmers in the developing countries of Madagascar and Uganda. Rodelle’s co-owners visit the growing regions a couple of times each year. 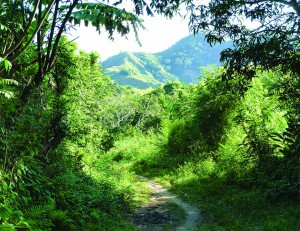 A lovely lush valley in Madagascar where the vanilla bean grows

“Not many vanilla extract companies have been on the ground in Madagascar and Uganda,” Baker said. “Vanilla is grown so far away from where we are here in Colorado that it’s been a priority of our leadership to show all the employees what our business does ultimately impact.”

The company officially partnered with a farming co-op made up of 3,000 farmers in Madagascar, which is helping it become a true farm-to-table vanilla supplier. Soon, Rodelle will be able to receive vanilla beans directly from the farmers rather than going through the traditional collector and exporter model.

The partnership will help farmers develop agronomy best practices and create a model farm for other vanilla farmers, enabling them to produce vanilla competitively. Working for the collective good, developing best practices and providing guidance and support are at the heart of the “Rodelle Cares” program philosophy.

“At Rodelle, we understand the importance of helping our farmers live a successful, healthy and educated life, so we focus on projects that will improve the overall standard of living. We are dedicated to going above and beyond just creating better baking products. We are focused on changing lives,” Basta said.

The company’s energy-efficient, safe cooking stove and micro finance projects also had positive impacts on farming villages. Locally in Colorado, Rodelle started programs such as the Vanilla Day 5K to raise money for Hope for Madagascar. Employee volunteers are pen pals with children in Uganda and Madagascar, and the company helps sponsor kids learning. A giving tree for Fort Collins area nonprofits is also created every Christmas.

A meticulous process
Nothing, really, about growing or processing vanilla beans is easy. Perhaps it’s what makes the spice so special. 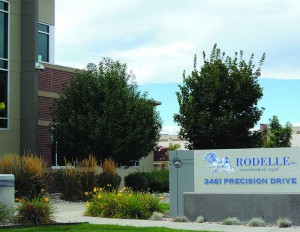 The meticulous Rodelle’s manufacturing plant where vanilla is made.

Vanilla is one of the world’s most labor-intensive crops, making it one of the most expensive. Each vanilla vine is an edible orchid plant, which attaches to shade trees or stakes. It takes about three years for a vine to begin producing flowers, and each vanilla orchid must be carefully pollinated by hand.

So far, only small farms have proven to successfully produce quality vanilla beans. Agriculture practices in the developing countries of Madagascar and Uganda are unsophisticated, and farmers face daily challenges including the poaching of the ancient rosewood trees that hold vanilla vines.

A farmer typically works about an acre of land, walking it every day looking for flowers that have opened and are ready to be hand pollinated with a small toothpick-like tool. Each flower produces just one bean. The bean grows for about six months to 7 inches in length. It’s then harvested and cured naturally in the sun for four months to develop flavor crystals — those tiny dark specks inside the bean — before it’s finally shipped.

Different vanillas from different regions of the world have unique flavor profiles. Tahitian vanilla has a floral character; Ugandan is earthy; and Mexican tends to be creamier. Madagascar produces the flavor that is known as traditional French vanilla.

When it’s extracted, vanilla must meet the Food and Drug Administration standard of identity for vanilla extract and contain at least 35 percent alcohol. Alcohol is the most effective agent for extracting the pure flavor from the beans. While it can’t officially be called vanilla extract, Rodelle does offer an alcohol-free vanilla flavor, which Baker says is quite popular.

There’s just something about vanilla
Vanilla has a complex flavor profile with hundreds of characteristics that create strong memory associations, according to Baker. It’s a key reason vanilla continues to be a really go-to ingredient for baking, especially at Christmastime.

“Vanilla is so inherent in baked goods because it’s a flavor enhancer,” she said. “Your mom’s Christmas cookies wouldn’t taste the same without the vanilla extract.”

Because it’s a flavor enhancer, Baker says that baked goods are better with vanilla extract in them. Used in savory applications, it can minimize other flavors and acidity. Some people use it in tomato sauces for that reason. It provides another element of flavor and can be a great secret ingredient.

“If you’re looking for a chili recipe for instance, you wouldn’t think to put vanilla in your soup or chili but if you do, it could provide really good results,” Baker said.

Rodelle works with a network of bloggers and an executive chef in the company’s on-site test kitchen. New recipes might be inspired by tradition, a season or an emerging trend. Baker noted that Rodelle is always sharing new ways to use vanilla by developing recipes for concoctions with spirits and unexpected savory dishes.

Aimee Shugarman, author of the Shugary Sweets blog, is a longtime champion of the brand. “I love the depth of flavor in their vanilla products. Unlike imitation or other brands, I feel you can truly taste the difference,” she said. “And I love what they do for the countries they purchase their vanilla from. They are a good company of people who care, making a difference in this world.”

Better with age
As a leading vanilla product producer, Rodelle clearly sets the bar high. In addition to its goal of becoming a true farm-to-table operation, the company plans to continue developing products in response to consumer interest and trends. A new Worldly Spices line will be launched next year, inspired by the growing popularity of international flavors.

“Each year, new food trends start to emerge, thus giving R&D teams a chance to develop new products for future use,” Bruntz said. “Our work in R&D is almost always something different each day, which is exciting.” 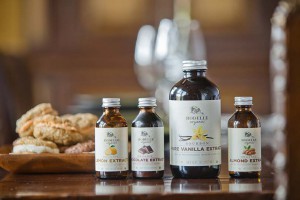 “We really want to celebrate that we’ve been part of so many baking memories for so long and, to do that and demonstrate our techniques and quality and practices throughout the years we’ve come out with Rodelle Reserve,” said Baker.

Each bottle of the ultra premium extract was aged for several months in French oak barrels, just as it was in 1936. A single 6.75-ounce bottle retails for $50 and has a vanilla bean in it, making no two bottles the same.

“Rodelle Reserve is the best vanilla extract available with the purest of ingredients and a vintage feel that honors the heritage of the world’s favorite flavor,” said Basta.

Like all of Rodelle’s vanilla products, the high-end extract somehow captures the heritage, quality and loving cultivation of plants and people. It is the essence of both Rodelle and the ancient spice itself.

“There’s a lot of pride in the company to do things right,” Baker said.

In the season of light, gifts come in many forms. And, in the heart of Colorado’s Front Range, little brown pods are helping bring joy and delicious flavors to cookie lovers across the state and country while helping create a brighter future for farmers half a world away.

Mary Peck is a freelance writer and amateur baker. She lives in northern Colorado with her family of willing taste testers.