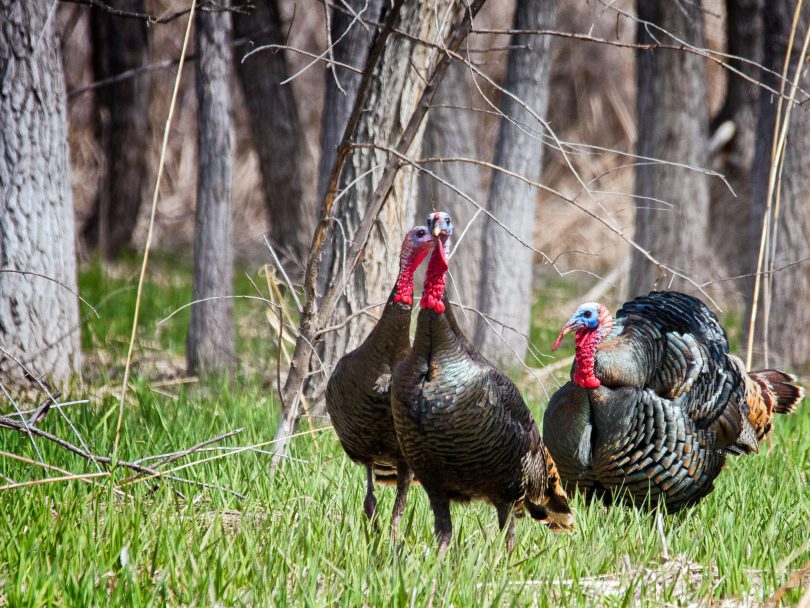 I’d never hunted turkeys until my kids talked me into going with them a few years back and, I promise you, it’s every bit as fascinating — and frustrating — as the outdoor magazines report it to be. I wished I’d done it sooner.

I didn’t have a license but tagged along with a camera and had as much fun as they did, maybe more. I got at least a few shots, but they didn’t — no doubt because they were hunting with recurve bows. Hunting turkeys with a shotgun is challenging enough; tagging one of these wary birds with a bow and arrow is ridiculously difficult at best. No matter; we’ll be going back again and again. It’s that much fun.

Turkeys’ notoriously spooky dispositions, exceptional eyesight and extremely keen hearing make wild turkeys virtually impossible to sneak up on, but love-struck gobblers are suckers for the courting yelps of a romantic hen during the spring mating season. That’s the operating theory anyway. Sometimes they are, and sometimes they aren’t. That’s the frustrating part.

Basic technique requires hunters to locate roosting birds the evening before the hunt, return before first light the next day, slip within a hundred yards or so of the roost, then try to lure a big, mature gobbler within range by imitating the call of a romantic hen. Hunters may use one or more of commercially manufactured or homemade calls.

When it works, you can hear the competing toms come gobbling toward you through the woods. Adrenalin races through your veins, your heart pounds so loud in your ears you’ll swear the turkeys can hear it and you’ll hold your breath until you nearly pass out. You give it all you can do to keep your bow hand from shaking the arrow off the string. All that remains is to wait for one of the toms to go into full strut and turn his back to you long enough for you to draw your bow, take aim and release the arrow — all the while making certain, of course, that one of the others isn’t looking right at you ready to blow your cover at the first false move. It’s not easy.

Thank goodness there are plenty of turkeys to practice on. According to the National Wild Turkey Federation and state wildlife agencies, there are more than 7 million wild turkeys strutting around the forests and river bottoms of America. Hunting them with camera, gun or bow and arrow is an utterly fascinating experience.