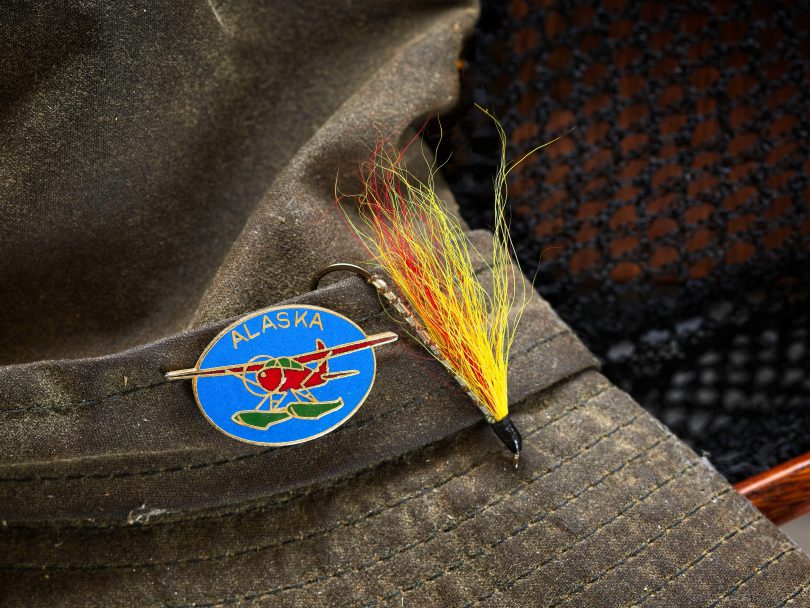 There’s a Mickey Finn stuck in the band of my old fishing hat and it’s been there since September of 1995. That was the year my brother Wayne, my cousin Al, Tommy Wolf and I finally made the fly-fishing trip to Alaska we’d been fantasizing about since we were kids.

I bought the fly in an outdoor shop in Cordova, Alaska, just before we boarded the bush plane that took us to a remote cabin on Prince William Sound where we spent 10 glorious days chasing silver salmon in the wilds of Alaska. We had no way of knowing it would be the last fly-fishing trip we’d make together.

The Mickey Finn is a classic, old bucktail streamer with a rich and colorful past. It was named after the 19th century Chicago saloon keeper who concocted a noxious tranquilizing drug he then used to anesthetize and rob his patrons. Mickey Finn would secretly slip his “knock-out drops” into the cocktails of unsuspecting customers at his Lone Star Saloon, then fleece them while they were passed out. Nice guy, eh?

The Mickey Finn fly was originally called the Red-and-Yellow Bucktail, for obvious reasons. It was created sometime in the 19th century by Quebec fly tier Charles Langevin, and later renamed The Langevin in honor of its creator, but then renamed again to The Assassin — apparently because it was such a deadly fly pattern.

The Assassin moniker was popularized by outdoor writer John Alden Knight during the 1930s, and then renamed yet again by one of his fellow outdoor writer buddies, Greg Clark of The Toronto Star who, after Knight took him on an incredibly successful fishing trip, proclaimed the fly as dangerous as a Mickey Finn, referencing Finn’s infamous, lethally-laced drink. This time, though, the name and the fame stuck.

The legendary silent film star Rudolph Valentino reportedly died of a ruptured ulcer and peritonitis, but an old Hollywood rumor alleges he was ultimately killed by drinking a Mickey Finn cocktail. I don’t know if that’s true, but I do know that the Mickey Finn bucktail is a killing fly. It seems especially effective for brook and brown trout, particularly in autumn. Brown trout, for whatever reason, are attracted to the color yellow and the Mickey Finn has plenty of that in it. In Alaska, we hooked a bunch of silver salmon on it. It was one of the first flies I learned to tie as a kid, and I still carry some in my fly box.

The Mickey Finn in my hatband is weathered with age now, but rich with tales of its own. Every time I look at it, I think of those days in Alaska when we four old guys would stare wide-eyed at a creek packed with flashing silver salmon fresh from the sea, then “slip ’em a Mickey.”