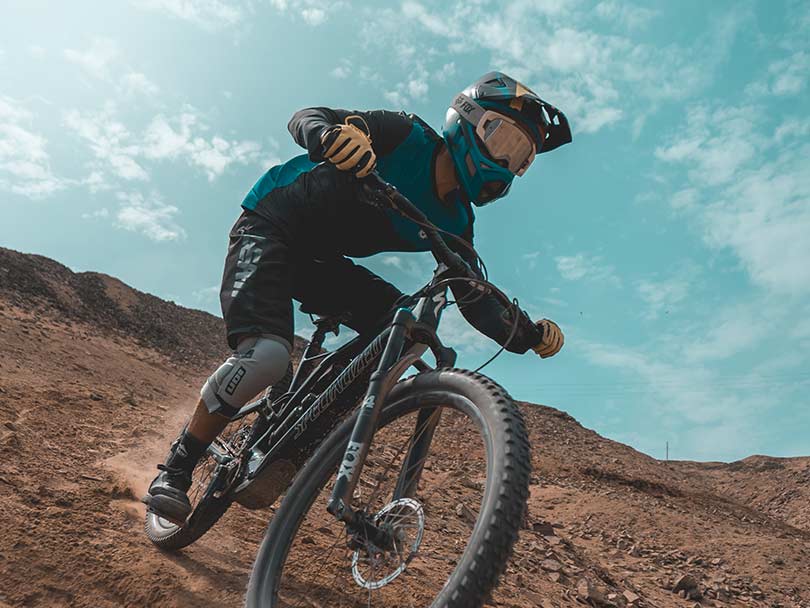 Fruita’s downtown historic district bustles with two thriving coffee shops, a couple of craft breweries and a popular pizzeria. Sidewalk cafes, a unique performing arts venue and an interesting independent bookstore that hosted numerous author events pre-pandemic all add to the town’s hip character, as do the large number of people on mountain bikes cruising through town on their way to or from the single- and double-track trails on nearby public lands.

It’s a big change from the sleepy little western Colorado town where multiple empty storefronts were once the norm and an unpleasant odor from a now-defunct oil refinery permeated the air.

Since then, volunteer trail builders, intrepid entrepreneurs and the Fruita Fat Tire Festival have all contributed to transforming Fruita, surrounded by Grand Valley Power’s service territory, into a biking destination that rivals Moab, Utah.

Local mountain bikers were already exploring existing dirt roads on Bureau of Land Management and U.S. Forest Service property before a group of riders decided to make the trails official by adding signs and names to the unpaved roads. Timms Fowler was a Grand Junction lawyer fresh out of college in 1986 when friends introduced him to mountain biking. Following a ride on Moab’s renowned Slickrock and White Rim bike trails, Fowler proposed creating similar-type trails around Fruita, which was still suffering from the 1982 oil shale bust in nearby Grand Junction.

“I thought it would sure be cool to get that kind of activity here,” Fowler says.

He secured permission from the BLM and organized several like-minded volunteers to begin work in 1988 on what would become the Grand Valley’s first designated mountain bike trail. With stunning views of the Colorado River and Utah’s La Sal Mountains, the Kokopelli Trail extends 141 miles from Loma (a tiny town just west of Fruita) to Moab.

“It was a tight group of about eight people who were the spokes of the wheel that made the Kokopelli turn,” Fowler says.

The Kokopelli Trail was dedicated the following year near Moab at the historic wooden Dewey Bridge (which was destroyed in a 2008 fire). A busload of Hopi people from Arizona came to perform a dance and bestow a blessing for the new trail, named for a fertility deity revered by some Native American cultures. Fowler had told a friend of the Hopi that they chose the name because it evoked the natural history and heritage of the Colorado Plateau. Approximately 100 people — mostly volunteer trail builders and BLM employees — attended the dedication.

Also, in 1989, Fowler and friends founded the nonprofit COPMOBA (Colorado Plateau Mountain Bike Trail Association) to formalize the layout and planning of a system of trails throughout the Grand Valley, including through Grand Junction and Palisade.

The Tabeguache Trail — a 140-plus-mile trail from Grand Junction to Montrose — was completed in 1991, starting at the Tabeguache Trail Network, also known as the “Lunch Loop” — a system of trails in the heart of Grand Junction off Monument Road near Colorado National Monument’s east entrance. While the Lunch Loop parking lot is often packed with vehicles, riders spread out comfortably on the various beginner, intermediate, and advanced trails. Though mountain bikers built the trails, 50% of the trail users are hikers, runners and dog-walkers, says Chris Muhr, who served as COPMOBA president from 1997 to 2002 and from 2005 to 2010.

Meanwhile, in Fruita, mountain bikers not wanting to ride the entire length of the Kokopelli were looping back to the trailhead via other existing dirt roads. “If you’re not going to loop the different trails, you cross the Salt Wash and head to Utah,” Fowler says. COPMOBA volunteers decided it was time to sign and name those connecting trails, too. Mary’s Loop, Lion’s Loop and the Troy Built Loop were all named for various supporters.

Fruita Fat Tire Festival
All this trail construction happening around Fruita offered an incentive for Rondo Buecheler to purchase a boarded-up, run-down building at 202 E. Aspen, where he and his manager-turned-business-partner Troy Rarick opened Over the Edge Sports in 1996. The only other Fruita bike shop at the time had moved to Grand Junction a year or so earlier.

Buecheler recalls his father flying out from California to try and dissuade him from purchasing the building. Nevertheless, Buecheler, who retired in 2018 after 38 summers of guiding wooden dory river trips through the Grand Canyon, was a risk-taker, and so he bought the building.

Rarick, also an adventurer, remembers a struggling, depressed economy when he graduated from a Grand Junction high school in 1981.

“There were no opportunities for a young person but to leave,” he recalls. “So, I went away and walked the Continental Divide Trail.” When he returned to the Grand Valley after his six-month, 3,102 mile trek from Canada to Mexico, he inherited a mountain bike.

Rarick, 57, has a reputation of being a master marketer, and it was his idea to start the Fruita Fat Tire Festival to help promote the shop, the town and nearby trails. Rarick found sponsors for the event and, in May 1996 launched the first Fat Tire Festival in downtown Fruita. He says he expected perhaps 200 people would show up for that first event, though it ended up being closer to 400. Attendance jumped to 1,500 by the second year.

The three-day festival includes demo rides on nearby trails and product expos from bike companies, food trucks and live music on blocked-off downtown city streets. Though the 25th annual festival was canceled in 2020 and 2021 due to the pandemic, Over the Edge’s current owners expect to relaunch the event in 2022.

North Fruita Desert
A growing network of trails off 18 Road in an area known as the North Fruita Desert has also drawn the mountain biking crowd. Riders associated with Over the Edge were creating unauthorized trails in the area, which caused friction with the BLM. Eventually the 18 Road riders recognized the benefits of partnering with the federal agency and COPMOBA and began developing trails and campsites that followed BLM guidelines.

“Once the North Fruita Desert became a legal riding area, Over the Edge became a sustainable business,” Buecheler says. “It put Fruita on the map.”

It didn’t take long for city officials to recognize the economic benefits that mountain bikers were bringing to the area. Fruita began partnering with COPMOBA and the BLM to help maintain trails, and the three entities collaborated on crafting a North Fruita Desert Master Plan, that calls for 30 miles of new trails, says city manager Mike Bennett.

“It’s hard to live and work in Fruita and not see the increase of visitors with bikes,” Bennett says. “Mountain bikers provide a high level of revenue to the area — money we use for core services.”

Sales tax revenue soared to a new record in 2017, following a 91% decrease in revenue from the oil and gas industry between 2014 and 2016. Tax revenue increased again in 2018 and 2019. “It used to be, not that many years ago, that we’d see a jump in spring and fall in tax numbers, and now it’s steadying out — we’re staying busy all year,” Bennett says. “Especially if we have a mild winter, people are coming all year long.”

Muhr says he talks to people all the time who want to move to the Grand Valley for the mountain biking. “When they see those trail resources — for mountain bikers, runners, hikers, dog-walkers — they realize the quality of life is a big enough draw, and they can accept less money [from an employer] than what they’d find in a larger city.”

Palisade Plunge
Buecheler, 65, sold his share of Over the Edge to Rarick and opened Rapid Creek Cycles at the Grand Valley’s east end in Palisade with Scott Winans in 2007. “Scott and I shared a vision of Mesa Slopes and Grand Mesa being the next big thing, so we partnered up and created Rapid Creek Cycles,” Buecheler says. The two men visualized the Palisade Plunge, a new, technical and grueling 32-mile mountain bike trail that begins on Grand Mesa and ends in Palisade.

In 2010, Rarick sold Over the Edge to former professional mountain bike racer Ross Schnell and the shop’s former bike mechanic, George Gatseos. While the shop continues to sell and maintain bikes, its main business is mountain bike rentals for people who want to try out the nearby trails. The shop sells detailed maps of the area, plus employees are happy to give people advice on where and how to ride, Gatseos says.

The rise of mountain biking has created other spin-off businesses as well. Fruita native Dawn Cooper founded Boneshaker Adventures, a mentoring program based in Grand Junction that teaches mountain biking and other outdoor skills to kids in kindergarten through middle school.

The 37-year-old Cooper grew up on a sheep farm and says she never heard of mountain biking until she started working at Colorado Mesa University’s outdoor program. Schnell invited her to a ride on the Gunny Loop, which is part of the Lunch Loop trail system.

“I crashed so many times,” Cooper says. Yet, two weeks later she signed up for a downhill race in New Mexico. “I loved it; I turned pro within a year.” She also joined the college cycling team. “The (Grand Valley) trails we were training and riding on are world-class,” she says. “Where we ride is incredible.”

In 2009, the Colorado Plateau Mountain Bike Trail Association was inducted into the Mountain Bike Hall of Fame — one of only two trail advocacy groups to ever be inducted, says Muhr, who traveled to receive the award in Las Vegas with another former COPMOBA president, Bill Harris.

Winans, who has served as COPMOBA president for the past 11 years, compares the nonprofit organization to an engine churning along in the background making things run. “It’s important to recognize that for the past 20 years COPMOBA has been moving this ball forward,” he says. “Without COPMOBA the story of Fruita would be different.”

Freelance writer Sharon Sullivan is a fan of The Cycle Effect program for young girls that the biking community supports in Mesa, Summit and Eagle counties.