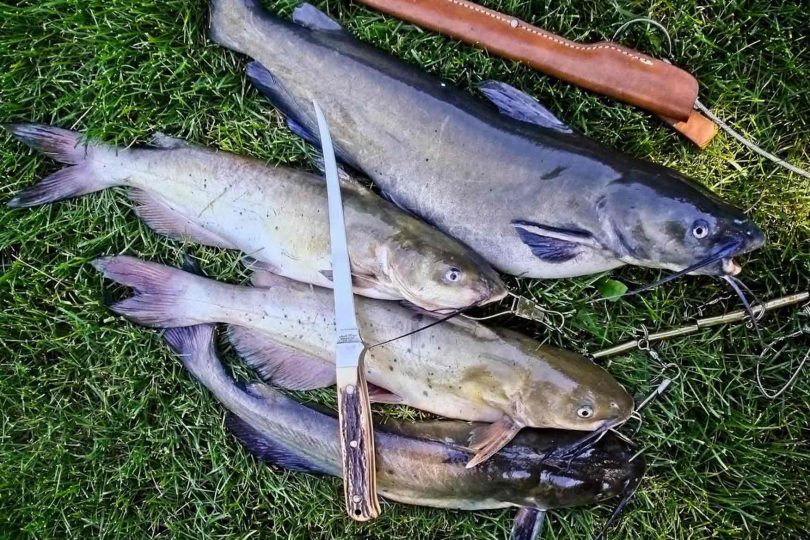 Bass, trout and walleyes probably command the majority of attention from local anglers, but the homely catfish is not without its share of loyal fans around here too. In fact, there are more of them hereabouts than you might imagine.

Even uppity fly fishermen and tournament pros on the bass and walleye circuits will, if you pinch them hard enough, confess that a night of good old-fashioned, down-home, redneck-style lawn-chair fishing for a stringer full of whiskerfish can be a barrel of laughs. Never mind that almost any catfish they catch will probably fight twice as hard and three times longer and taste better than all the others — except for the walleyes — to which they’ll run a very close second in the frying pan.

Despite the popularity of the glamour species, clerks in the fishing department of any western hook and bullet store will tell you there’s a continual demand for the specialized rods, reels and terminal tackle many prefer for cats: large, wide-gapped hooks, heavy sliding sinkers, glow-in-the-dark rod lights, and the tinkle bells some guys like to put on their rods to wake them up in case they fall asleep waiting for a bite.

And then there’s the arcane assortment of commercially prepared catfish baits ranging from gizzard shad marinated in anise, garlic or assorted fish oils to frozen suckers, anchovies, pickled crawdads, rancid blood baits and jars of stuff so horribly repugnant it would make a buzzard wretch. Nonetheless, catfish love them all and they sell like hotcakes, even if they don’t smell like them.

Catfish are notorious night hunters with small beady eyes; they locate the majority of their food by smell. Plain old nightcrawlers are effective, too, but are more likely to attract non-target species like trout, carp and suckers.

The boys and I like raw, fresh chicken liver — or rather the catfish do — so that’s what we use most often. It has just enough of that funky, farm boy charm about it to appeal to our redneck side (and the catfish’s taste buds) without being so utterly distasteful as to keep us from skewering meaty gobs of it on our hooks. Even so, we always stash baby-wipes or hand sanitizer and towels in our tackle bags to clean our hands with after we bait up so we can munch Cheetos, chips and miscellaneous snacks through the night without fear of contracting salmonella or some other nasty intestinal ailment.