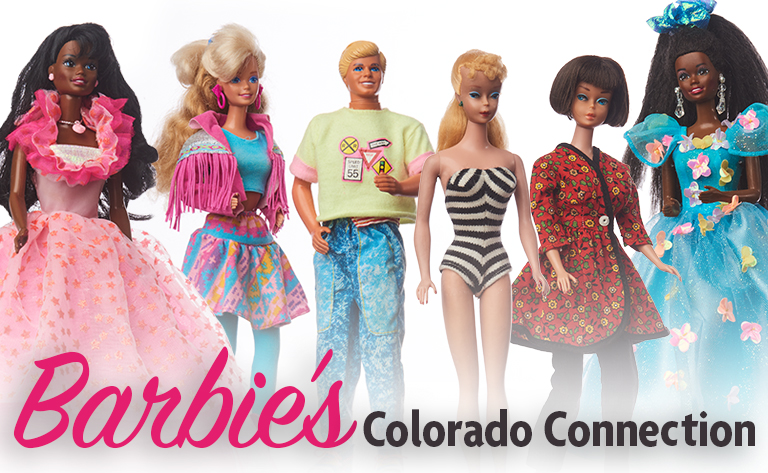 By  Cyndy Thomas Klepinger –
Photos courtesy of barbiemedia.com and Mattel – 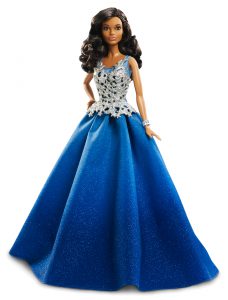 We are all familiar with the fashion icon known as Barbie and her bright smile and killer figure. In fact, she has been part of girls’ lives since the late 1950s. It’s claimed that 92 percent of American girls ages 3 to 12 have owned a Barbie. But few know about Barbie’s background; specifically, who was Barbie’s mom?

She was Denver native Ruth Mosko, who was born November 4, 1916, to Jacob Joseph Mosko (née Moskowicz), a blacksmith, and Ida Rubinstein, a housewife. Ruth was the youngest of 10 children. Her father arrived at Ellis Island in 1907. After telling immigration officials that he was a blacksmith, he was sent to Denver, the center of the railroad industry. In 1908, his wife, Ida, arrived in America with their six children and joined her husband in Colorado.

When Ruth was 6 months old, her mother became ill and Ruth was sent to live with her older sister, Sarah, and Sarah’s husband. It was in Sarah’s drugstore and soda fountain that Ruth first developed her enthusiasm for business. Ruth preferred work to play and grew up in a family where the idea of women working outside of the home was not unusual, although it was not a common belief of that era.

Ruth attended public school in Denver and graduated from East High School. At age 16, she fell in love with a poor art student named Izzy Handler after meeting him at a high school dance.

During her sophomore year at the University of Denver, Ruth vacationed in Los Angeles and landed a job at Paramount Studios. Izzy soon joined Ruth in California, and in 1938 the two returned to Denver and got married. 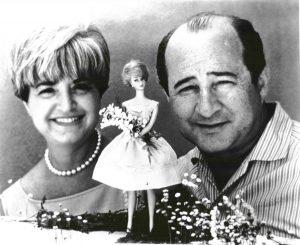 Ruth and Elliot Handler, both raised in Colorado, pose with an early version of Barbie. Photo courtesy of Mattel

The Handlers went back to California, where Izzy, (now going by Elliot after Ruth convinced him to use his middle name), studied at the Art Center College of Design in Pasadena. In 1941 Ruth left her secretarial job at Paramount to work with her husband, who was designing and making furniture and household accessories out of the new acrylic materials, Lucite and Plexiglas. Her husband produced the pieces and she did the selling.

After a few years, the Handlers tired of the business and sold their share of it. In 1945, they started another, making picture frames with the scraps of plastic and wood left from their earlier business. They and Harold “Matt” Matson started Mattel Creations, joining elements of Matt’s and Elliot’s names. Under the Mattel moniker, the two partners began fabricating dollhouse furniture.

Ruth continued to run the marketing department. Due to his poor health, Matt soon sold his share to Elliot.

The company had its first hit toy in 1947 with a ukulele called Uke-A-Doodle. That proved such a success that Mattel switched to making nothing but toys. Ruth drove Mattel’s business decisions, while her husband nurtured new toys.

These facts are only part of her story. What may be more important is the impact Ruth made on the toy industry through her vision and creativity. In fact, she changed the face of the toy industry.

The birth of Barbie
After watching her daughter, Barbara, ignore her baby dolls to play make-believe with paper dolls representing adult women, Ruth realized there may be a niche for a three-dimensional doll that encouraged girls to imagine the future. When visiting Germany in 1956, Ruth saw a doll that looked like a teenager, and this doll inspired her to follow her dream. Mattel’s designers spent several years creating Ruth’s doll using the German doll as an inspiration.

Barbie Millicent Roberts debuted at the American Toy Fair in New York City in 1959. Ruth named the blond 11-and-a-half-inch doll for her daughter, who was a 17-year-old attending a local Los Angeles high school. Dressed in a black and white striped swimsuit with the necessary accessories of sunglasses, high-heeled shoes and gold-colored hoop earrings, Barbie’s body was not only shapely but also had a movable head, arms and legs.

Barbie had a chic wardrobe that had to be purchased separately and updated regularly. Barbie was a marketing sensation. Within a year of her introduction in 1959, Barbie became the biggest selling fashion doll of all time. Sales increased with the introduction of different Barbie dolls and accessories. Barbie became a staple in the toy chests of little girls everywhere.

It was Ruth’s marketing genius that changed toy marketing when she acquired the rights to produce the popular “Mickey Mouse Club” products in 1955. The cross-marketing promotion became common practice for future companies. Barbie made her first television appearance on the “The Mickey Mouse Club.” This marketing technique helped sell 351,000 Barbie dolls in the first year at $3 each. Barbie quickly became an icon, with her ever-changing wardrobe and career options that mirrored women’s changing aspirations. It is admirable that Ruth foresaw a modern world where a girl could grow up to be whatever she wanted.

Over the years, Barbie changed jobs more than 75 times, becoming a dentist, a paleontologist, an Air Force fighter pilot, a World Cup soccer competitor, a firefighter and a candidate for president. Even in demanding positions, though, Barbie retained her fashion sense. She was joined by friends and family over the years, including Ken, Midge, Skipper and Christie. Barbie kept up with current trends in hairstyles, makeup and clothing. She is a reflection of the history of fashion since her introduction to the toy market.

Life after Barbie’s debut
Due her marketing and business success, Ruth became president of Mattel, Inc., in 1967. Barbie and later Ken, introduced in 1961 and named for Ruth’s son, became the best-selling toys in the world.

In the early 1970’s, Ruth was diagnosed with breast cancer and underwent a mastectomy. Because of her illness, she spent less time at Mattel and resigned as president of Mattel in 1973. Not surprisingly, she then used her business acumen and started working on a new product: a comfortable breast prosthesis. The result was the Nearly Me line, which still produces and distributes breast replacements and post mastectomy swimwear.

However, in 1975 the Handlers were forced out of the company they started due to a conflict with the board over perceived mismanagement.

Over the years, Ruth received numerous awards for her accomplishments. Some of her honors include Woman of the Year in Business (Los Angeles Times), Toy Industry Hall of Fame inductee, Volunteer Achievement Award from the American Cancer Society, one of 75 Outstanding Women in America (Ladies’ Home Journal) and the first Woman of Distinction from the United Jewish Appeal.

Ruth was known as an entrepreneur, inventor and businesswoman. She died April 27, 2002, in Los Angeles. 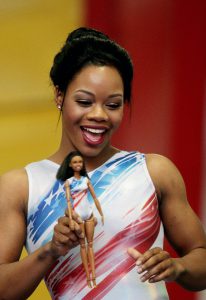 Barbie today
Barbie’s world is more than a doll and accessories. Kids today can use their high-tech gadgets and interactive smartphones and apps to personalize their Barbie doll experience. Other licensed products include books, apparel, home furnishings and home electronics. She even has a YouTube site and a Facebook page.

But Barbie’s popularity doesn’t stop there. The Musée des Arts Décoratifs, which is affiliated with the Louvre in Paris, held a Barbie exhibit in 2016. The exhibit featured 700 Barbie dolls displayed on two floors, as well as works by contemporary artists and documents (newspapers, photos, video) representing Barbie. Barbie has become a popular collectible among adults. Collectors prize early numbered Barbie dolls from 1969 and the 1990’s, as well as a range of rare and special editions of the iconic toy. 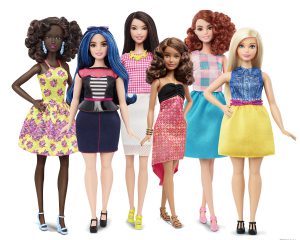 Over the past few years, Mattel transformed Barbie, and she now may look a bit more like those who play with her, curves and all. The new 2016 Barbie Fashionistas doll line includes four body types (the original and three new bodies), seven skin tones, 22 eye colors, 24 hairstyles and countless on-trend fashions and accessories. With these changes, Barbie added diversity and more variety in styles, fashions, shoes and accessories. Mattel claims girls everywhere will now have infinitely more ways to spark their imagination and play out their stories.

“For more than 55 years, Barbie has been a global, cultural icon and a source of inspiration and imagination to millions of girls around the world,” Richard Dickson, president and chief operating officer of Mattel stated in a recent press release. “Barbie reflects the world girls see around them. Her ability to evolve and grow with the times, while staying true to her spirit, is central to why Barbie is the number one fashion doll in the world.”

Growing up with Barbie
When I was a little girl, all my friends had Barbie dolls. However, I had to be different, and I had a Tressy, an American fashion teenaged 11-and-a-half-inch doll with a feature that allowed me to adjust the length of her hair. I just had to push a button on Tressy’s tummy and I could “grow” the hair out. If I wanted my doll to have short hair, I used a key that went into her back that, when turned, wound the hair back in. I could style her hair.

I remember many happy hours playing with my doll and imagining adventures for her. However, I was curious what other women thought about Barbie herself, so on the recent Pedal the Plains (a three-day bike event in eastern Colorado), I chatted with others about Barbie.

When asked if she played with the fashion doll, Comanche National Grassland Park Ranger Barbara Timoch smiled widely and said, “Absolutely my name is Barbara. I had a Barbie, Ken and Midge (Barbie’s best friend).” She shared that she also had one of the first Dreamhouses, as well as the iconic pink Corvette. Since Barbie wore glamorous evening wear as well as casual outfits, athletic wear and swimsuits, usually accompanied by her trademark high heels, Barbara and her girlfriends regularly exchanged clothes and gave new outfits as gifts.

Donna Huff, a 4-H leader who lives south of Swink in southeastern Colorado, emphatically said no. “I didn’t play with Barbie, she added.” I’m a farm girl. We played with trucks and tractors and made mud pies.” She added that her grown daughter hated dolls, too.

Ordway Town Clerk Cindee Crough grew up playing with Barbies. But she said her 9-year-old and 12-year-old daughters prefer playing with today’s electronics. Cindee shared that she had more than 20 dolls, including Ken and Midge. A favorite one was the Barbie that was sculpted in the likeness of Marilyn Monroe and wore a long evening gown and white faux fur stole.

Littleton resident Betsey Major, who’s a baby boomer, said she didn’t like dolls, so she didn’t have a Barbie. She explained she stimulated her imagination by being outside. She grew up in cities from the Canadian border to the Gulf Coast as her father was in the oil and gas business.

Jayne Thompson, a millennial who grew up on a ranch in the Pinedale, Wyoming, area, played with the Barbie dolls that she got from her aunt. She shared that she liked to play with Barbie because it allowed her to be creative and reinforced that she could do whatever she wanted to do as Barbie held so many diverse jobs, including architect, astronaut, McDonald’s cashier, NASCAR driver and veterinarian.

However, two “tween” cowgirls, Solie and Shayla, both said that there has never been a Rodeo Queen Barbie nor a farmer or rancher one. Solie shared that she got rid of her Barbie after a month or so as she decided she was a tomboy. Shayla said her Barbie didn’t have a long life because she lost it shortly after getting it (she thinks she lost it in the horse corral).

Cyndy Thomas Klepinger is a freelance writer in the Denver area who remembers spending hours playing dolls as a youngster.