A cameraman films a San Miguel power truck coming up a mountain road.

For cooperative businesses, October brings more than all things pumpkin and masses of Halloween paraphernalia. October is National Cooperative Month, a 50-year-old tradition and time for co-ops across the country to reflect on their principles and share the value of cooperative membership with others.

This year, it also happens to be the month that the team at Durango-based film production company Inspirit Creative is putting the final touches on “Pioneering Power,” a documentary exploring the birth of electrical power generation in the mountains of southwestern Colorado and the formidable challenges faced by the people who changed history. 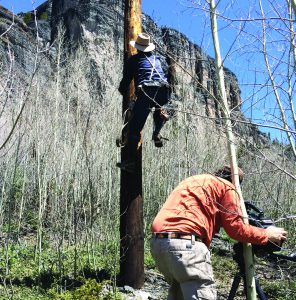 Cameraman, Jay Kriss, captures lineman KJ Johnson climbing a pole the way it was done in the early years of the industry.

The enthusiasm Executive Producer and Director Jay Kriss of Durango brings to the project and its story of electric power’s western roots is unmistakable. “I find it fascinating that these guys were building wood flumes to shoot water down something that [Nikola] Tesla designed,” he said. “Electricity as we know it started here. No one else can say it. We were the first.”

Immersing himself in his subject is key to the documentary-making process, Kriss explained. When the film industry veteran is seeking a documentary idea, he looks for a major event, individuals to tell about it and a strong archival source to help bring the event to life. Kriss’ award-winning 2012 documentary “Harvesting the High Plains” centers around the story of two men and how their innovative farming practices developed during the Dust Bowl ended up creating one of the nation’s largest wheat-farming operations.

“Documentary films are different; the development process takes some time,” said Kriss. “I spend a lot of time reading and looking at the social implications, particularly in the West.” After a year of planning and research in places like the Washington, D.C., National Archives, Cornell University and the Center of Southwest Studies at Fort Lewis College in Durango, Kriss and Associate Producer and Co-Director Christina Knickerbocker launched production in August 2015.

The team traveled extensively for months, shooting more than 35 hours of footage at locations that included Idaho, Utah, Colorado and New Mexico. Some original structures and power lines, built mainly to serve a booming mining industry, that are still in use today made the footage and re-enactments especially compelling. “When you think about our history, it’s so new, it’s almost frightening,” Kriss said. 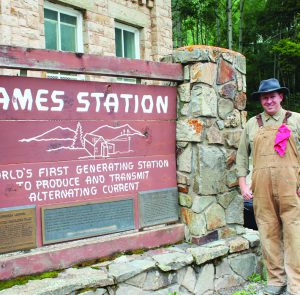 Alex Shelley of SMPA at the Ames Hydroelectric Plant.

In Colorado, the film crew trekked to sites like the historic Ames Hydroelectric Plant outside Ophir, Camp Bird Mine near Ouray, Bridal Veil Falls overlooking Telluride, the wooden flumes at Cascade Creek in LaPlata County and the Tacoma Hydroelectric Plant, which is accessible only via the Durango and Silverton Narrow Gauge Railroad.

The 80-minute documentary will cover the work of industry heavy-hitters Thomas Alva Edison, George Westinghouse, Tesla and the Nunn brothers; the world’s first commercial alternating current, or AC, power station built in Colorado in 1891; and the monumental change that electric power generation and transmission brought to life in the West. The film’s journey culminates with the authorization of the Rural Electrification Act, which subsequently led to the formation of today’s electric cooperatives.

Not surprisingly, the cooperative spirit played a role in “Pioneering Power.” Interviews, historic photos, archival film and realistic re-enactments are key elements of the project. When Kriss called on San Miguel Power Association for help, the electric co-op, whose service territory includes Silverton, Telluride and Nucla, was quick to answer. “We’re super excited and it’s a story well-worth telling,” said Alex Shelley, communications executive at SMPA. “This can really shine a light on what happened here.” 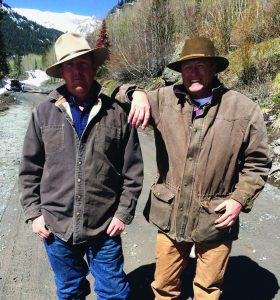 Shelley and several SMPA linemen donned 1930s-era clothes to help create authentic period scenes, including one filmed at the Idarado substation perched at an elevation of 11,000 feet on the top of Red Mountain Pass in Ouray County. The substation’s decades-old wood structure, built to power the Idarado Mine, was an ideal stage. “The fun part was going to these old lines we have,” said K.J. Johnson, a journeyman lineman at SMPA. “We have stuff still in use now that was built in 1926.”

Turns out Johnson is a man of many talents. He is also a boot repairman and helped adapt the linemen’s boots to be historically accurate by putting leather soles on them. He did similar work for Quentin Tarantino’s Western movie “The Hateful Eight,” filmed near Telluride in 2015.

“It was fun working with Jay and Christina. He’s shot a lot of films and she knows a lot of the history,” Johnson said. “They were very organized and ran everything by us to make sure it was possible. I’m really excited for the premier.” 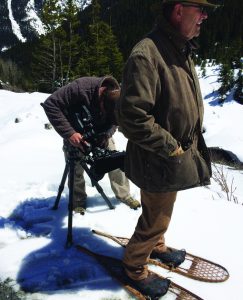 Snowshoes have always been part of a mountain lineman’s necessary equipment.

“Documentaries can be powerful teaching tools,” Kriss said. The project includes a shorter companion film titled “Power Today,” and features discussions with linemen and information on today’s wind, coal, solar and hydroelectric power generation sources. The curriculum will accompany the film as a packet available through the Public Broadcasting Service.

It is set to premier in Durango, followed by early showings in other locations that provided assistance. Its television premier will be presented by CPT12 during prime time in upcoming months. It will ultimately be seen nationally on PBS in more than 20 million households, followed by a home DVD release through PBS and will be available later on Amazon, Netflix and other outlets.

Mary Peck is a freelance writer with a history of working with and writing for Colorado’s electric co-ops.