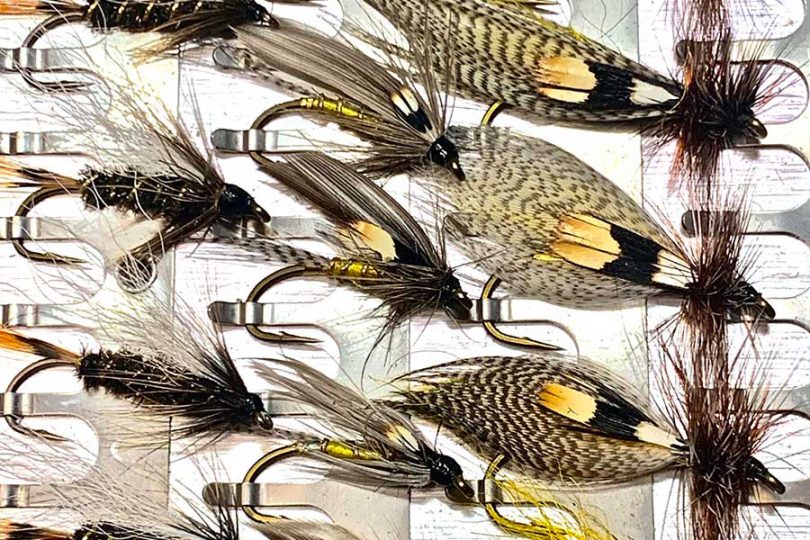 Having arrived at that place in my fly-fishing career (if you could call it that) where catching fish no longer seems nearly as important as it used to, I’ve taken to playing around with some old, forgotten and oddball fly patterns instead of relying on today’s scientifically proven fish-getters.

Fly fishing has been in a perpetual state of evolution since 1496 when an aristocratic nun named Dame Julianna Berners wrote the first book about it. And today, rods, reels, lines, technique and the ridiculous assortment of gadgetry associated with the sport are in such constant flux that it’s impossible for anyone to keep up with it. That’s especially true of fly patterns; there must literally be millions of them by now, imitating everything from freshwater plankton to saltwater squid and whatever else a fish might conceivably put in its mouth. Hundreds more are marketed each year with no end in sight.

Flies are typically modeled to mimic some prominent physical feature or behavioral detail of a specific aquatic insect or organism. Size, color, shape, wings, legs, fins, tails and eyes all figure in the mix. Some anatomically correct models look as if they could crawl across your desk and fly away; others are so odd-looking they defy description.

Many classic fly patterns date back to the 1800s, are crafted from rare or exotic materials, have unusual histories or backstories, are of foreign origin, or wear unlikely names. The latter are the ones I’ve taken a liking to lately, and for no other reason than that they’re curiously weird or appeal to my latent sense of nostalgia. Age probably has something do with that. After all, I don’t think you can be nostalgic about much of anything when you’re 20-something. And it’s been more than half a century since I was 20. But never mind about that. The thing is, I like to fool around with old fly patterns.

Late last summer, the boys and I were float-tubing on the Delaney Buttes Lakes and catching the occasional trout on tiny, suspended midge pupae and small leech imitations. Both were recommended fly patterns for that time of year, all of the major insect hatches having been over for quite some time. Still, the fish didn’t seem interested, so I tied on a Hornberg and a fly called the Gray Monkey. The Hornberg is an old classic originated in the 1920s by a Wisconsin game warden named Frank Hornberg, and I learned of the Gray Monkey from a Scottish fly tyer named Davie McPhail. Neither was appropriate for the location or conditions, but I began catching fish on both flies almost immediately.

A fisherman who was floating nearby noticed my luck and asked what I was catching the fish on. When I told him a Gray Monkey, he wanted to know “…if it was legal to use live bait up here and how, exactly, do you get a monkey to stay on the hook?”