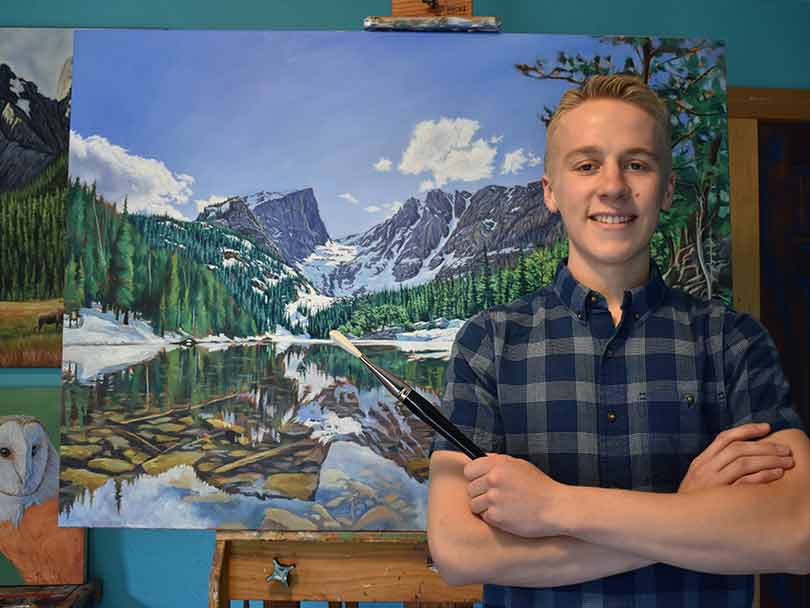 Cody Oldham stands in front of “Arrowhead,” a 36-inch-by-48-inch painting of Hallett Peak.

Before he was old enough to have a driver’s license, Cody Oldham, Colorado landscape and wildlife artist, had launched a career of his own, showing his work in prestigious Colorado galleries and teaching art online.

“Sometimes it’s difficult needing to have my family drive me to galleries and shows,” the talented 16-year-old said. “I have my driver’s permit now, and I should have my license by December. Then I’ll be able to drive myself.”

Living with his parents in rural Colorado, about 45 minutes east of Woodland Park, Cody and his sisters, Savannah, 14, and Sophie, 10, are home-schooled, which allows him to pursue a career and his education at the same time. So far, he has had no formal art training. The painting came naturally for him, beginning at age 11.

His dad, Chris Oldham, is also an artist and provided Cody’s initial inspiration to become an artist.

“My dad is very creative,” Cody said. “He does abstracts, sculpture and woodworking, but right now he’s more focused on attending fire academy to become a firefighter. He’s always encouraged me and been very supportive. I watched him paint at home and at his gallery in Salida and followed in his footsteps.”

An average day sees Cody up at about 6 a.m., having breakfast with the family and helping feed and care for the ranch animals. The family lives on Catamount Creek Ranch, which is a licensed rehab center for mountain lions. The family has two horses, five house cats and a dog. After feeding and caring for all the critters, Cody does his schoolwork, followed by a workout routine that energizes him for the rest of the day.

It is then that he settles down in his studio to paint for four or six hours while listening to music by the Goo Goo Dolls, Rob Thomas, OneRepublic, Michael Bublé and Frank Sinatra. The end of the day brings more chores before a home-cooked dinner with his family. 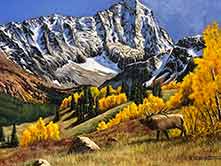 Cody’s painting of an elk in the Rocky Mountains.

Asked when he got his first set of paints, Cody said, “It was just a few years ago. I started out sculpting and painting dinosaurs when I was a little kid, following tutorial videos on YouTube. As my talent grew, I borrowed my dad’s paints, which were all acrylic. There were always paints and brushes around the house. I used all acrylics until about 2016 when I decided to get my own paints.”

He started out using water-mixable oils and recently switched to regular oils.

Among his art heroes are Robert Bateman, James Gurney and Norman Rockwell. When he was 12, Cody tried to send an email to Gurney only to find that he doesn’t accept emails. His website offered a mailing address, so Cody sent him a handwritten letter asking for advice on painting dinosaurs. Gurney received his letter and returned a helpful handwritten letter of his own that included a sketch of a dinosaur.

“Andrew brought me out of my dinosaur phase,” Cody said with a laugh. “He’s a very well-known artist with a huge studio and gallery in New Zealand. I entered a contest to do a Skype session with him in 2016. I didn’t win, but I asked if he would be interested in Skyping and [told him] that I’d pay for his time. We became friends once we spoke. Now we visit monthly via Zoom and Instagram. 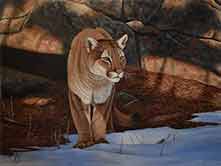 Titled “Samson,” this November 2019 painting is from a photo of an old cat that once lived on Catamount Creek Ranch.

“His style is more realistic than mine,” Cody said. “I’d say it’s on the verge of photo-realism. He inspired me to paint the subjects I paint today, mainly wildlife, landscapes and some 16th-century still lifes. My first wildlife painting was a mountain lion I did in 2017.

“Andrew has made a huge impact on my career. He’s taught me what to avoid, how to open my own gallery, what paint and materials to use and how to manage money. On his recommendation, I use only top-quality materials. My brushes are handmade in England and my oils are handmade from a place in South Carolina.”

He hopes to meet his mentor face to face in the next two to three years.

Once Cody began painting in earnest and people saw his work, his talent was recognized almost immediately. His first showing was a one-man show at the Paquette Gallery at the SteamPlant in Salida when he was 15 years old. He has since had two other successful one-man shows in Salida and Manitou Springs.

In September 2019, Cody appeared in Southwest Art magazine in its “21 under 31” feature of successful artists across the country under the age of 31. After being featured in an article in the Colorado Springs Gazette, he was recently invited to show his work at the Broadmoor Galleries in Colorado Springs. 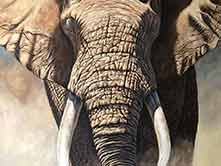 Cody’s paintings are so realistic they could be mistaken for photographs. They include grizzly bears, mountain lions, eagles and Colorado landscapes. “The elephant is probably my favorite animal to paint,” Cody said. “I love the way they capture light and the wrinkles in their skin. I’m always looking for a new way to paint them. But my favorite painting is probably the grizzly bear with a fish in its mouth. That’s currently at the Broadmoor Galleries.”

Depending on the size, each painting can take anywhere from a few days to a month to complete. Cody starts each painting by priming the canvas with a burnt sienna paint. He then sketches the image on the canvas from his reference photo. The next step is “blocking in” where he paints the first layer of colors and shapes to begin to give the painting a sense of realism. Next he adds the details that truly bring the painting to life. 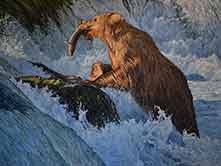 “Catch of the Day” by Cody Oldham

“I enjoy hyperrealistic animal portraits,” he said. “When I decide on a painting, I’ll sometimes work from a photo or I’ll go online to find a picture I can work with and then alter it to my own interpretation of the image. It’s very hard to paint an animal from life. They can fly or walk away, or the light can change. Most of the animals I paint aren’t around here or are rare. For example, it’s rare to see any owls or elephants around the ranch.”

What is “around here” are the high-country Colorado landscapes he loves. He enjoys climbing the 14ers in the summer and fall and takes photos from the top to get aerial views and high mountain scenes. Currently he is finishing an epic landscape of Hallett Peak in Rocky Mountain National Park. Last year, he climbed and/or painted Mount Quandary Peak, Mount Democrat, Mount Lincoln and Mount Cameron.

In addition to painting, he is now teaching art, mostly to other young artists online. He creates instructional videos and shares them on his YouTube channel, Cody Oldham Artist. He also shares his painting process with daily posts to his Instagram account (@Cody_Oldham_Artist).

“My friends are mostly other young artists around the country like myself, but some are older,” he said. “We connect online. They’re more like students than friends because we’ve never met in person. It’s hard to make friends when you’re in a rural area like I am and home-schooled. Most of the people I know have contacted me on social media, seen my process and wanted to learn. We have a common interest, so age doesn’t matter.”

Cody hopes to inspire others to pursue their passions. “Today there are so many ways to connect with other people and get your work out there. All it takes is hard work and the drive to take the initiative.”

COVID-19 restrictions haven’t made much of a difference for Cody and his family, other than he has to wear a mask in public and has been showing mostly online on his website at www.codyoldham.com and the websites of other galleries. As the world begins to open back up, he’ll be getting back into more galleries.

“When you create, you have to let go,” he said with a smile. “I’m always excited when I sell a painting.” He was especially excited when the Manitou Art Center informed him that one of his paintings had sold in mid-2018 — his first sale. This reinforced the concept that Cody was now a professional artist. 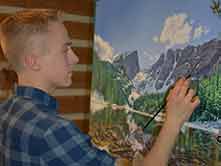 Most of his work is his own inspiration, but he does do commissioned work and says most of the commissioned work is something that inspires him anyway, so he has a passion for it. Someone may like the painting of a mountain lion or herd of bison, for example, but would like it in a different setting or with different lighting.

While he loves Colorado country and the outdoors, he prefers studio work to plein air.

“In the studio I can focus on painting, and there’s no risk of the light or the weather changing or the subject moving,” he said. “The studio provides a controlled setting.

“Right now, my studio is in a small space in part of the house,” he said. “In the next year or so my dad and I would like to build a much larger studio space. That way my sisters and my dad can use it as well. Mom [Paige Oldham] isn’t an artist. She’s the CFO [chief financial officer] of a company in Pueblo. She’s my business manager and helps me with the marketing and financial sides of the business.”

Ultimately, he would like to open a gallery of his own in a few years, wherever his dad is working as a firefighter. Looking to the future, when he finishes home-schooling, Cody has toyed with the idea of going to art school, but so many opportunities are opening up it’s hard to decide.

“For now, I plan to keep on working as an artist, getting my work shown in new places and looking for new opportunities,” he said.

Living in the Rocky Mountains, there is no end to inspiration from his surroundings. From a leaf on a tree to a dramatic mountain scene, the environment motivates him.

Cody said, “I’m forever grateful to live where I do and to have the opportunity to express myself through my paintings.”

Freelance writer Arlene Shovald of Salida loves to write, as a book author, occasional writer and reporter. This is her third piece for Colorado Country Life.