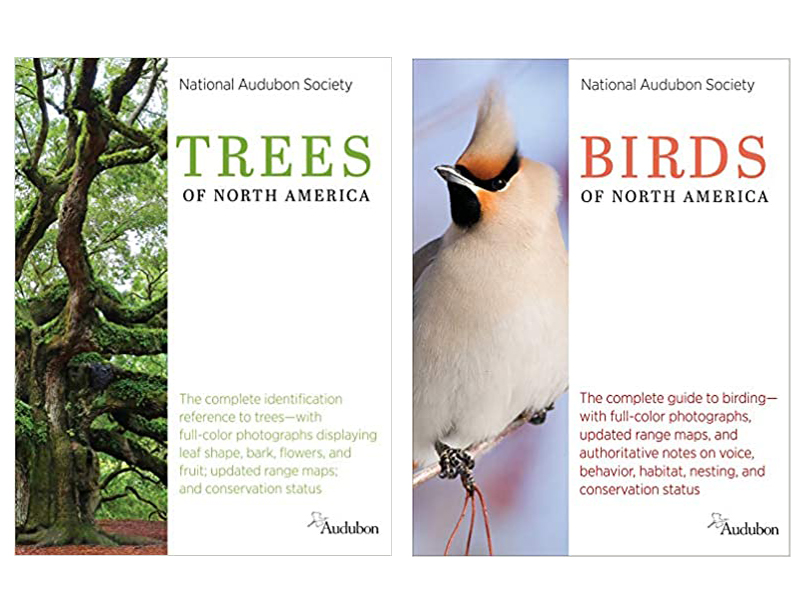 On April 6 of this year, Penguin Random House released the highly anticipated new National Audubon Society Birds of North America and National Audubon Society Trees of North America (published by Alfred A. Knopf). I was lucky enough to get early copies of both books from the kind folks in their promotional department in March and I was definitely impressed.

No doubt, most backyard nature lovers and professional naturalists alike are familiar with Audubon’s iconic line of field guides. After all, their famous “turtleback” series with its leather-like textured covers and conveniently packable size has been around since the 1970s and sold more than 18 million copies in 29 different titles covering everything from birds, mammals, trees and wildflowers to mushrooms, rocks, fish, insects and, well, just about anything that occurs in the natural world.

Both the new bird and tree guidebooks, though, reflect an almost radical departure from Audubon’s classic field guide format with a whole new look, size and design. And the new format is more than merely cosmetic: Where the prior guides had their photographic identification plates arranged in a separate section from the corresponding descriptive text, the newer guides incorporated photo presentation, taxonomic data, habitat info and scientific field notes, as well as the current science and, perhaps most importantly, the conservation status of birds in a single, user-friendly location.

Birds covers more than 800 species with over 3,500 razor-sharp, full-color photos of birds in their natural habitat — often with multiple images of each bird. According to the press release, it also includes essays by leading scholars in each field on holistic insights into the world of birds, range maps reflecting the impact of climate change, detailed physical descriptions and information on voice, nesting habits and similar species.

The new Birds of North America is bigger and nearly three times as heavy as its predecessor. It no longer qualifies as a field guide in the strictest sense of the word, but it is an outstanding scientific reference tool in its own right.

The change is carried over into Trees of North America as well: 540 species, 2,500 full color plates with images of bark, fruit, flowers, leaves, seasonal color changes and tons of new info on conservation status. As with Birds of North America, Trees also includes an expanded glossary, index, ribbon marker and new essays by leading scholars. Where the older series of guidebooks were printed on lightweight, tissue-thin, parchment-like paper, the new editions are printed on glossy, heavy-weight stock. To say they are cosmetically beautiful would be an understatement, but the real beauty lies in the improved ease of use and new informative essays by leading scientists, scholars and taxonomic and field experts. New Audubon guidebooks in this series on wildflowers and mushrooms will be forthcoming in 2023. I can’t wait.