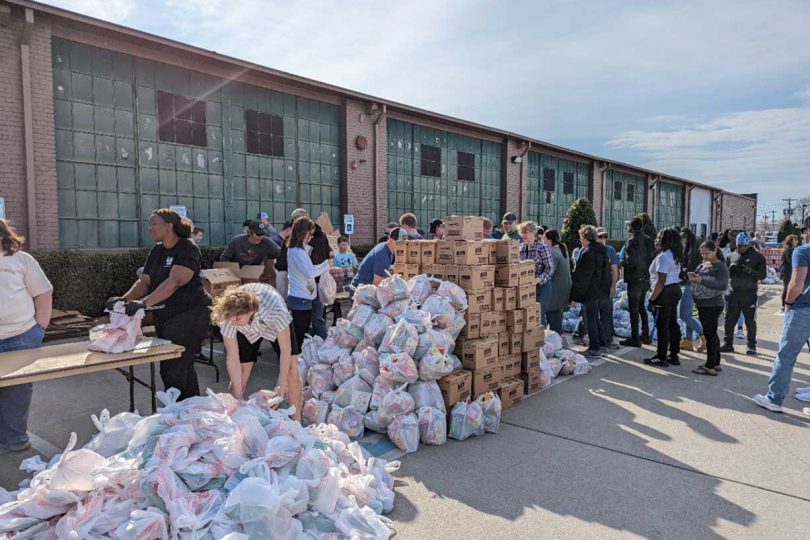 More than 100 individuals representing electric cooperatives across the country sort and prep 25,000 pounds of food, package 16,000 meal packets and assemble 5,000 dental hygiene packets for families in need while in Nashville, Tennessee, for the NRECA Annual Meeting.

Thousands of people representing electric cooperatives across the country went to Nashville, Tennessee, at the beginning of March for the National Rural Electric Cooperative Association’s annual meeting. More than 100 of them, including co-op directors from Colorado, took time prior to the meeting to volunteer in a nearby community.

About 40 volunteers, including Kohler McInnis of La Plata Electric in Durango, sorted and prepped 25,000 pounds of food that was then loaded into the vehicles of 300 families, who arrived to pick up the much-needed food. The group also packaged 16,000 meal packets and 5,000 dental hygiene packets for families in need.

Other volunteers worked on upgrades in several schools as a part of the service day. Holloway High School got a face-lift to its entryways; Wee Care Daycare got its playground cleaned up; and Bradley Academy had 200 light fixtures converted to LEDs.

Electric co-ops added this community service program to NRECA’s annual meeting in 2006 when the meeting was held in New Orleans, Louisiana, the year after that city was devastated by Hurricane Katrina