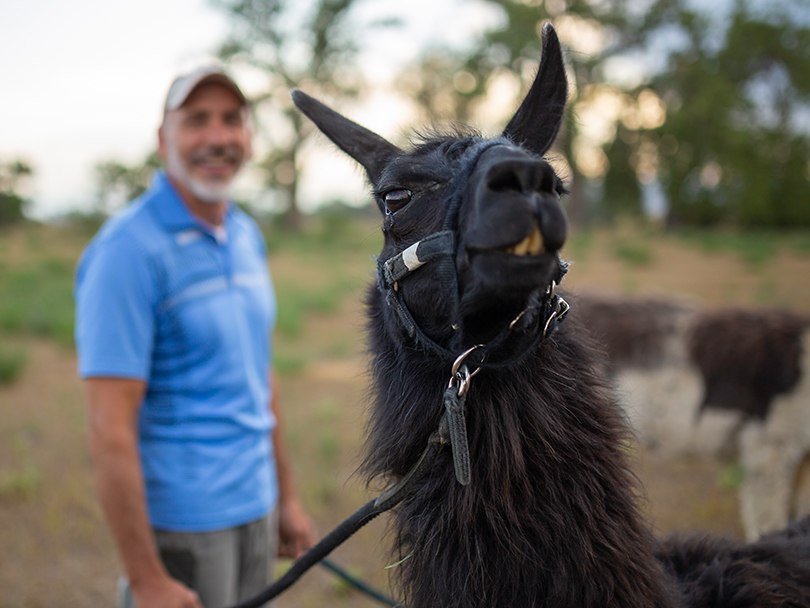 Colorado Country Life received an abundance of great pet stories for our 2020 contest. You already read the winning entries, but, in our eyes, these additional stories are also “the cat’s meow.” 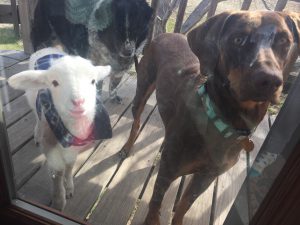 Zoey still had a lot of puppy in her when we got Sherman. Sherman was a lamb that we bottle fed in the early spring. It was a wet, cold spring and Sherman spent quite a bit of time on the front porch. These two quickly became good buddies — I’m sure that Zoey thought that we got Sherman just for her to have someone to play with.

As the weather warmed up and Sherman moved outside to his own pen, so did Zoey. We would let Sherman run free because he stayed with Zoey. Zoey actually grazed alongside Sherman in the yard and pasture. Sherman followed Zoey out when it was time to build fence, and we had to put another dog bed in the shop because the two would sleep by each other up on the old couch. The two would tag-team and do their best to aggravate the two older dogs, Wango and Tango. They would put up with it until Sherman started to head butt them and then hightail it out of there.

One day, as I was working on the computer, there was a tapping at the sliding door. I figured it was Zoey, but turned to see Sherman. I guess Zoey had taught him how to get in. To this day we do not know if Zoey thought she was a lamb or Sherman thought he was a dog.

This year, with school being cancelled because of COVID-19, I have been able to spend a lot more time with my FFA project, Rona. Rona has become a member of the family. Rona is a pig, but she thinks she is a dog. When I go out to do the chores, I let her out to run around with me. She follows me all over the yard while I feed and water all the other animals as well as the garden I am growing for 4-H. 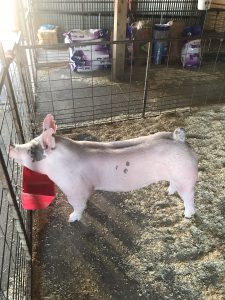 Rona has a great personality — when she is excited, she really gets to squealing. One day I sat down on the porch to take a break and she came to sit next to me on her backend. This led me to the idea that I could possibly make her sit on demand. I went inside, got a bag of marshmallows and started teaching her to sit. It is not perfected yet, but we are working on it. I mean, how many people can actually train a pig to sit?

When I go into the barn in the evenings, she lays down by the fan and I sit next to her and rub her belly. She squeals happily and then falls asleep — she absolutely loves it.

Having Rona for a pet this year instead of just a project has been really different for me. I never have this much time to spend with them and never get attached to my projects, but this year is different and so is Rona. She has become a member of the family and it will be super hard to let her go when fair rolls around this year. 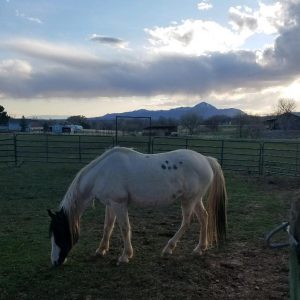 Jubilee, a beautiful Grulla Paint horse, is more of a partner than a pet. She has been with me through it all.

In late 2014, I was in a car accident in Shiprock and couldn’t ride for nearly two years due to the brain injury I sustained. The first time we took her up to the mountains after that, I had to be reminded which side to get up into the saddle, but she was so patient with me. After all, she saw me sit in a hammock chair under the apricot tree next to her pasture for an entire summer, just trying to get my brain back together.

Jubilee seemed to know I wasn’t quite the same cowgirl and was patient when I got mixed up with my communication. She waited until I figured out how to show her where I wanted to go, and she would just stand there until I figured out how to untangle her halter after a ride. I could tell she was glad to get out of the pasture, so we kept going to the Glade, to Mancos, to the fairground — close, simple, familiar rides. Riding her would always bring a tear to my eye at the end of an outing.

At age 15, I bred Jubilee to cool. She just turned 16 and is expecting our first foal any day now. She’s the best partner a Grulla haired cowgirl could dream up and, with a little one on the way, I’m sure there are many more adventures to come.

Kimber was a little puppy when she was dropped off at a Southern Colorado animal shelter; she is a Lab/German Shepard cross. There was a strange connection that drew me to her, so I adopted her and took her home. A month later I was diagnosed with a brain tumor and three days after the surgery I had a stroke. As I was recovering, I noticed Kimber would come and place her head on me and give me a worried look, minutes later I would have a seizure. I asked the neurologist about her reaction and was told some dogs have a natural ability to detect seizures. I asked the doctor what it is she can sense and he replied, “I don’t know. The dog is smarter than we (the doctors) are.” 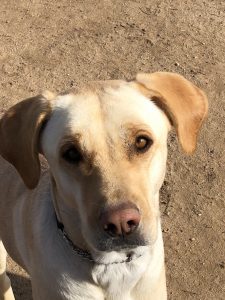 During a seizure she will place her body on mine and lick my face until I awake. She also has the ability to sense when I am about to go into anaphylaxis shock, which gives me time to take my medications.

After about 300 hours of training, Kimber has been trained for public service and goes everywhere with me. She has allowed me to maintain some of my independence; she is the smartest dog I have ever known. She can open doors via handicap access buttons and retrieve items I drop. She also does deep pressure therapy to help with anxiety and helps me balance as I walk.

It was football season and my husband was glued to the television watching SEC football. I, on the other hand, was scrolling Facebook when I came across a post that a local rescue was seeking an immediate foster or adopter to save a dog named Kratos from euthanasia at the shelter within the next 24 hours. My heart sank. I just “knew” I had to do something to save the frail black dog that no one seemed to want. I asked my husband if we could foster Kratos. After much coaxing and explanation that fostering was only temporary, he reluctantly agreed with the caveat that we were just taking him in until he found his forever home. 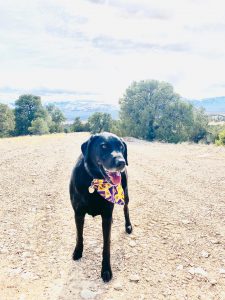 The next day, we picked up Kratos from the animal shelter; he was extremely thin. I remember thinking how scary he looked and didn’t have much of an immediate taking to him.

It wasn’t until we came home that I realized just how sick Kratos was. He laid on the floor, lifeless and lethargic. I knew something was wrong and took him to the vet. The vet advised that if I had waited a day longer to bring him in, he probably wouldn’t have made it. He had pneumonia among other infections.

This is when Kratos’ new lease on life began… or maybe it was mine. From that point, we were inseparable. He bounced back to health and became our “foster fail.” Since then, he has been living his best life. Kratos enjoys hikes, camping, boat rides and swimming. He moved from Louisiana to Colorado in 2017 and loves being the protector of his five acres here in Monument. Undoubtedly, this Heinz 57 from a shelter in Louisiana has turned out to be much more than “just a dog.” He is my best friend.

I am Trevor and I am 8 years old. This is my parrot Cosmo and we are best buddies. 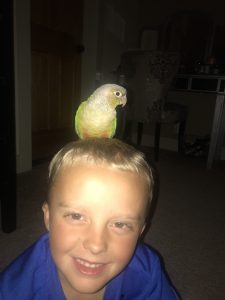 Cosmo sits on my head and even grooms me like I am a bird. He dances with me and likes to hear me practice playing my guitar. He can’t talk, but we like to squawk at each other; if I squawk he does it back to me. We squawk on the phone, too, when I visit my grandma and grandpa. He snuggles me and kisses me, and likes it when I pet him. Cosmo helps me build Legos, but he isn’t too good at that; he just picks them up and throws them toward me. Every day I go to his cage to say good morning and he dances to say he is happy and comes to the front of the cage. He is pretty smart and can figure out how to unlatch his cage so he can get out and see me. He is my best buddy and I think he is the coolest pet ever.