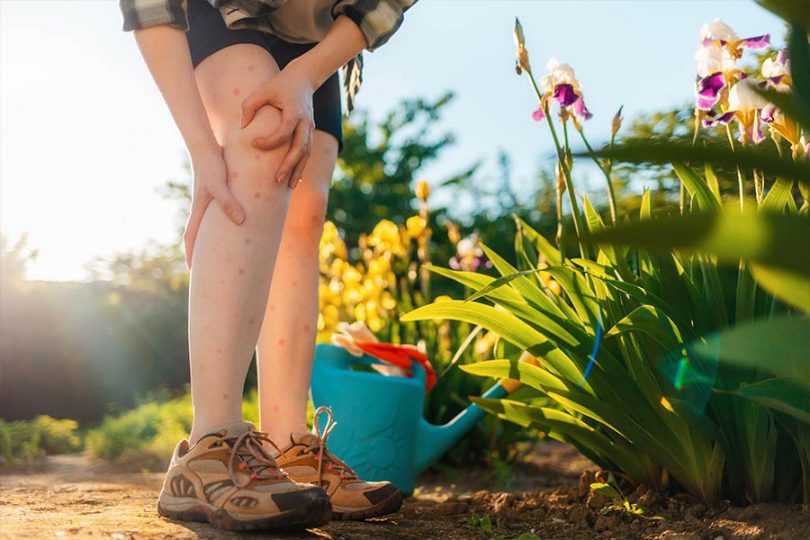 In all my years gardening, I never had an insect bite until last summer. Actually, I was walking around admiring the roses when I decided to scoop up some leaves that collected at the base of one bush. Suddenly, I felt a sharp sting. Assuming I had been pricked by a thorn, I didn’t think much of it, other than I should have known better than to tend roses with my bare hands.

Within a short time, my hand was throbbing with pain; it started to swell; and the redness around the wound was spreading toward my wrist. Home remedies didn’t help. It was time to call the doctor.

Apparently, it was an insect bite. The symptoms subsided after a week of antibiotics, but the pain lasted much longer and I had difficulty bending my knuckles for months. This taught me a valuable lesson.

Insects and spiders can be beneficial to gardens, but they also pose risks to us, so it is better to take precautions than to try to eliminate them altogether. Begin by learning what you might encounter and then making a habit of surveying the yard for potential dangers before gardening.

Look high and low. Ants help aerate the soil, pollinate flowers, distribute seeds and get rid of caterpillars, but they might sting if you disturb their nests. Bees, a favorite pollinator, may nest in the soil while hornets and wasps build nests on a wide variety of structures. Like ants, they don’t tend to bother you unless they feel threatened. If you have a known allergy, keep your epinephrine injection kit handy. If you aren’t aware of an allergy but have an unexpected reaction, seek immediate medical attention.

Spiders benefit the garden by eliminating moths, thrips and cucumber beetles, but they might bite if threatened. Garden spiders, as their name suggests, are found in gardens. They are not aggressive and their bites are harmless. By contrast, the bite of hobo spiders, which are typically found under rocks or in other dark places, might cause headaches, lesions or blisters. Yellow sac spiders are poisonous. Their bites can cause lesions and require immediate medical attention. These distinctions are why it’s important to become familiar with the spiders commonly found in Colorado.

Ticks are an insect not considered beneficial to gardens. Their habitat is in higher elevation woody and grassy areas where they can feed on mammals and rodents. We don’t normally encounter ticks in large cities, but they can be found under leaves and around stone walls and woodpiles. Like the common mosquito, they carry diseases that can kill, paralyze or seriously infect people and animals.

One of your best defenses is to wear clothing that covers as much skin as possible. Wear a hat and gardening gloves and then spray insect repellent on your clothing and exposed skin. While DEET used to be popular, many people now prefer natural repellents. You can find different options at the store or make your own from crushed parsley and apple cider vinegar or a combination of lemon and eucalyptus oil. These tips should help keep bugs from bugging you during this gardening season.