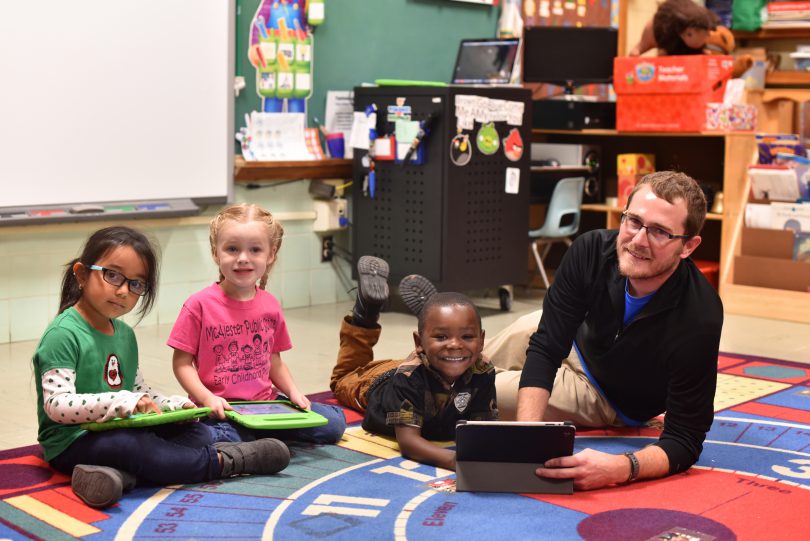 Unlike ever before in history, a new generation of children is being exposed to technology from an early age. From toddlers who easily navigate smartphones and iPads to elementary school “YouTubers,” this technology-engaged generation offers educators a new set of opportunities and challenges.

And teachers are responding. An “ed-tech” movement is connecting educators across the nation — those in small rural schools and those in inner-city school districts alike. They are sharing knowledge and ideas and empowering one another to use technology in their classrooms. The high-tech devices at their disposal, once found only in science fiction films, are reaching elementary children where they are enhancing the student learning experience.

Excited to Learn
Pre-kindergarten students at William Gay Early Childhood Center in McAlester, Oklahoma, are excited to come to school to learn using the class’ iPads. Their teacher William Higgins was a 2015 Touchstone Energy Cooperatives SKIE Award regional winner for his transformative use of technology in the classroom.

“Sometimes it’s hard to get kids engaged, but using the iPads is an extremely easy way to get them involved,” Higgins says. “If they don’t want to be here it’s difficult to get them to do anything. When they want to learn they’re more attentive and have better behavior.”

According to Higgins, many of the students in the low-income school district don’t have access to this technology at home so they look forward to coming to school to use it.

Higgins invests time in creating lesson plans that use the high-tech classroom equipment, often networking with other educators via Twitter to share ideas. Last year his students grew a “QR Garden.” They lined the hallway with colorful construction-paper flowers they created. In the center of each flower was a QR code. The students could scan the code with an iPad and learn about colors, numbers and letters. The class also enjoys making stop-motion movies, learning basic coding on the iPads, and interacting with Higgins’ sphero robot.

“A lot of people think of technology in the hands of kids as a babysitter,” he says. “With a small amount of help and perspective, kids can do things you can never imagine. It’s pretty amazing.”

Casting a Vision
When it comes to technology in the classroom, a common question is where to find funding. A better question, however, is how to cast a vision for technology.

Nancye Blair Black, owner of EngagingEducation.net and president of the Florida Society for Technology in Education, is a former classroom educator and technology specialist who now consults with school districts across the country to create technology plans.

“Whenever you plan to integrate technology in the classroom, you should start with the end in mind. What is the goal?” she says. “By beginning with that goal, I believe it is possible to create a strategic technology plan within any budget that can work toward that vision.”

Jeff Sorce is a third- and fourth-grade teacher at Estes Elementary School, in Owensboro, Kentucky. The Kenergy Electric Cooperative member says the low-income school district earmarked part of its budget for classroom technology because of its vision for innovation.

As a result, Sorce’s classroom is well equipped with technology, including a Chromebook and an iPad for each student. These devices have helped Sorce to create a paperless classroom using the Canvas learning management system. When the kids complete assignments, they upload them to Canvas; Sorce grades the work and gives feedback electronically. This system also keeps parents in the loop of what’s happening in the classroom.

“At first parents are skeptical of the technology. They think the teacher is going to go play Candy Crush in the corner, but they love it,” he says. “They can see everything in Canvas. It’s an open line of communication between the parents and me, and it builds trust.”

Sorce says technology has helped him to integrate self-paced learning into his classroom. He creates video lessons and digital worksheets. Students can move through the lessons at their own speed and those who need more support can get it. Sorce says having the videos benefits students who need to review a particular concept.

“They don’t have to ask me every time. They can go back and watch the video if they have a question,” he says. “This keeps me from answering the same question 25 times. It frees me up to give support in different areas.”

Sorce says one way the technology has greatly benefitted the students is in their critical thinking skills. The third graders are learning coding using the Flappy Bird app. One student wrote 32,000 lines of code in the fall semester alone.

“Coding teaches them to slow down and think in a step-by-step process. If they miss a colon, the bird won’t do what it’s supposed to do. This has helped them with word problems on math tests,” he says.

Creating Cutting-Edge Classrooms
According to Black, one of the greatest challenges she observes is that districts invest in high-tech equipment but fail to provide the continued support needed for effective use of the technology.

“Successful technology integration requires teachers to manage a room full of digital devices; to quickly learn new applications; to develop principles of digital citizenship in students in addition to their content area curriculum; and to create new types of lesson plans in which the technology makes learning more efficient and effective instead of being a distraction or time-waster,” she says.

James Elliott is the assistant superintendent of the Coffeyville, Kansas school district, where he oversees the district’s Information Technology program. During his 14-year tenure, the rural, low-income school district has been on the cutting edge of technologically.

Despite the fact that the school’s classrooms are equipped with the latest technology, Elliott, a Northeast Oklahoma Electric Cooperative member, says the school district’s most important investment is not in equipment — it’s in people. For the teachers, the district provides training, coaching and funding for technology.

“We expect high-level uses of technology, but if the technology is there and you don’t know how to use it, it’s a waste,” he says. “If we see a teacher struggling or if they are not using technology in the classroom, we have a technology coach who sits in their classroom and formulates a plan to help the teacher integrate high-levels of technology into their lesson plans.”

Teachers are encouraged to explore innovative ways to use technology in the classroom and, if they have a particular need, the district offers stipends to purchase those items. In turn, they are expected to share the results with their colleagues at one of the school’s 40, hour-long trainings offered each year.

According to Black, it’s not just teachers who need technology in the classroom; students need equal access.

“In today’s world, digital productivity, communication and citizenship are vital to success in college, careers and civic life,” Black says. “We must give students ample access to technological tools during their primary and secondary education in order to prepare them for an increasingly technology-infused future.”

Elliott says the school district enables students to take charge of the learning process; teachers serve as their guides. The school has a saying, “two before me,” which reminds students to identify two other resources to try and answer their question before asking the teacher. This instills confidence in the students to use the technology that’s available at their fingertips.

“If we don’t teach kids how to learn, to teach themselves, we’re not doing them any benefit,” Elliott says.

Welcome to the Future
For innovative educators, using technology in the classroom — even at the earliest levels of learning — is a way to engage kids where they are.

“Technology is changing so quickly; I can’t believe how much it’s changed in the past couple years,” Drew Minock, an ed-tech innovator, says. “This is the world kids are living in nowadays.”

A former elementary teacher in Bloomington Hills, Michigan, Minock started a blog called twoguysandsomeipads.com with his co-teacher at the time, Brad Waid. The duo began sharing the innovative ways they were using iPads in their third-grade classes. A few years later, they are using their passion for and knowledge of technology to help other teachers; they speak worldwide and share what they’re doing with a wide audience on Twitter.

Minock says their niche in the world of education technology is augmented reality, or AR. Classrooms around the globe are using AR to enhance the student learning experience. For example, an elementary class studying the solar system can use their devices to interact with the solar system in 3D. They can isolate planets and even open them up and look inside. He says AR is a powerful learning tool because the visual aspect helps students grasp concepts faster and retain information longer.

Minock expects that virtual reality will start to play a role in classroom education as well. VR participants put on headsets that allow them to interact with a 3D world. This technology will enable students to connect with and learn from peers on the other side of the globe.

As Minock says, “We’re really only limited by our imaginations as to what we can do with technology.”