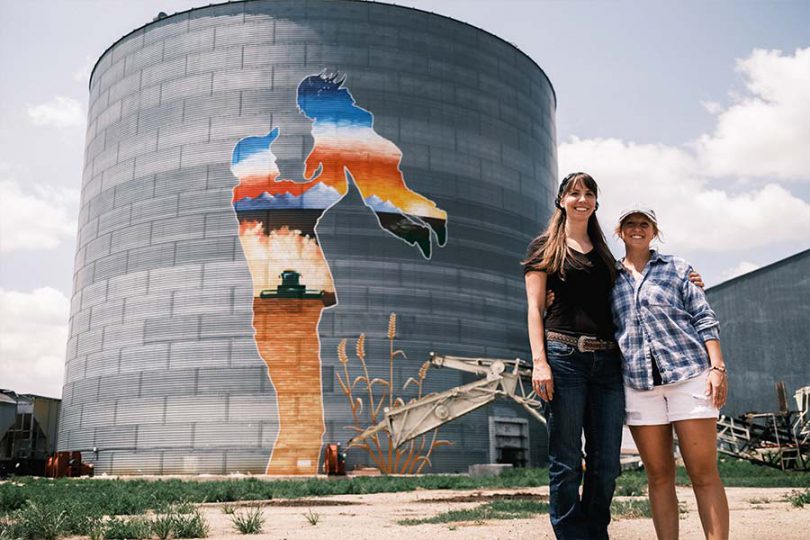 Staci Ravenkamp Beauford (left) and Audrey Sayles stand beside their mural “Heart of Harvest,” the first of many on Colorado’s Plains.

“Heart of Harvest,” a colorful image of a wheat farmer lifting his young daughter into the air, went viral on the internet in June 2018 after several young women painted the 60-foot tall image on a grain bin in Limon on Colorado’s eastern Plains. People across the United States were mesmerized by the emotions evoked in the mural — the glee of the little girl, the love of the father, the pride in raising a crop to fruition with the John Deere combine harvesting the golden wheat, along with the beautiful Colorado blue sky and the Rocky Mountains. 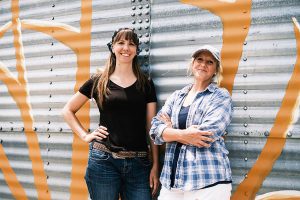 Staci Ravenkamp Beauford, the daughter of a wheat farmer, designed “Heart of Harvest.” The town of Limon commissioned Staci to paint the mural and Ed Owens, manager of NORAG on the east side of Limon, offered the grain bin for the project. Staci recruited her cousin, Audrey Sayles, along with her sister, Kayla Ravenkamp, and a friend, Krystal Wiser, to help with the project.

During a lunch break, Staci and Audrey scrolled through Facebook and noticed their friends talking about the mural going up and wondering who was painting the mural on the grain bin.

“So, we were sitting there talking,” Audrey says. “Maybe we could start a mural company.” Then the next question was, “What are we going to name ourselves?” Audrey had loved a show when she was little called ‘Two Guys, A Girl, and a Pizza Place.’ So, she suggested, “What if we call ourselves ‘Some Girls and a Mural?’”

Including their acclaimed, “Heart of Harvest,” and an outdoor basketball court in Arriba dedicated to the “Arriba Aces,” Some Girls and a Mural have painted over 40 murals and signs on the eastern Plains of Colorado, along with some in Illinois and Arkansas (where Staci now resides with her husband and three sons). Staci and Audrey are passionate about sharing their farming heritage through their art, promoting agriculture and the towns supported by it on the eastern Plains, while encouraging and educating rural communities about the benefits of art.

“We didn’t have any formal art training,” Staci says, “but the most important training we had was growing up on a farm working with our dads and our sisters. We were thrown right into all the farm work. We learned to figure it out and make it work.”

Audrey says, “I would say our dads are not patient men, but they probably had to be very patient in their lives farming with their wives and daughters.”

Audrey was teaching physical education in a rural K-12 school when they painted “Heart of Harvest.” But Staci’s first love was always art. Before painting murals, she created art using salvaged barnwood, rusty metal and acrylic paint and sold her creations at farmers markets. Staci painted her parents’ propane tank and painted an American flag on a fuel tank at D-J Petroleum in Limon. 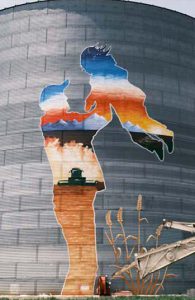 The first step to painting the “Heart of Harvest” mural was pressure-washing the grain bin from a bucket truck. They paid special attention to cleaning the hundreds of bolts and around the bolts. Audrey says, “Most paint companies will tell you that the longevity of the project is dependent on your prep work. We called a lot of paint companies to make sure we got a primer that would stick to this corrugated metal.”

Next, Staci hired a man who worked in outdoor cinema to come to Limon to project the outline of the design on the grain bin. Audrey says, “We had him set up on a stock trailer and we were up there in the bucket of a bucket truck with glow sticks. We thought it would be an all-night thing, but it only took 45 minutes to draw the outline.”

The bolts continued to be their archnemesis as they painted, according to Audrey. “Getting the edges, up and down, all around and mixing colors. Staci and I used a little bucket truck. We had wires and paint cans hanging off our necks, dipping across. Once we had a microburst of wind hit us. Staci took the bottom of the bucket and I’m like, ‘seriously, where am I supposed to go?’ We laughed about how amateur hour it felt.”

“The mountains… People are always stopping all along I-70 asking how much longer it is until they can see the mountains. There is even a community named Firstview in Cheyenne County on Highway 40 because it is the first place Pikes Peak can be seen. We definitely tried to pay homage to that,” Audrey says.

“And, at the very top in the little girl’s hair,” she continues, “there’s the Big Dipper and Little Dipper. We tried to include all the great things of eastern Colorado — you have your colors, you have your family, but we are also known for our stars. People can’t come out here without commenting on the stars. Staci tried to capture it all. I think the movement of it says so much.”

Even the John Deere combine has special meaning for Staci. Her dad farmed with John Deere equipment. While Audrey and Staci may debate about what brand of implements to use in murals (Audrey’s dad uses Case and Gleaner), this was Staci’s design, so she won.

“People from all over the United States have told us how touching this mural is,” Audrey says, “and it made them think of their dad or their grandpa. But we also feel like it is a good representation of our dads. It’s such a great tribute to modern dads.”

Some Girls and a Mural

Within 24 hours of posting the photo of the “Heart of Harvest” on their new Facebook page, the photo was viewed more than 129,000 times and received 5,000 likes.

“It just went crazy!” Staci says. “We were getting so much attention and it was almost like we didn’t have a choice about whether we wanted to paint more murals — the people wanted more.” 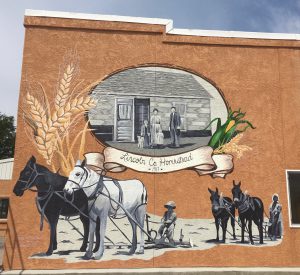 Some Girls and a Mural’s “Lincoln Co. Homestead” demonstrates farm life in 1917.

“We did the mural on the Limon Heritage Museum and then the mural on the Plains Heating and Air building in Limon. It is owned by Leon Kelly, and he commissioned a mural of his family’s homestead in Karval,” Audrey says.

Most of their business is privately funded projects. Only one or two out of every 10 projects are publicly funded.

“A lot of people in rural Colorado have a vision. It’s such a joy to bring their vision to life. They want the social media exposure, the hashtag saying, ‘I was at this restaurant’ or ‘I was in this town.’ Putting people on the map, that’s a big thing,” Audrey says.

Enough projects have come their way that Staci is able to be a stay-at-home mom with her children and Audrey left her 10-year teaching career to paint murals full-time. Audrey and Staci enjoy working with youth in the Limon school and community art programs. An example of their work with youth is the bottle-cap murals they created at Kissel Pond.

While “girl-power” keeps their business running, they still have some outside help. “Our crazy old dads stop in and give us advice all the time. We are fortunate that our dads will drop anything to come help on a project when we need it. We don’t mind being daddy’s girls at times,” says Audrey with a laugh.

A Voice for Rural Colorado

Staci and Audrey share a concern for the divide between rural and urban Colorado.

“We talk a lot about how our parents’ and grandparents’ generations still had a deep connection to the farm,” Audrey says. “They had an aunt and uncle or grandparents still living and working on the farm. And young people our age, especially in urban areas, don’t have that connection. We feel that through our art we have been a big voice for rural Colorado, the farmer, modern agriculture and rural art.” 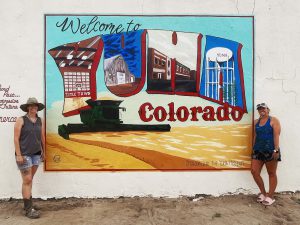 Staci Ravenkamp Beauford (left) and Audrey Sayles are proud of how their Yuma welcome sign offers a glimpse into the town’s culture.

They are concerned about how agriculture is portrayed to children. When Staci watches cartoons with her boys, she sees farmers in bib overalls using outdated machinery. “They portray farmers as dumb and I get upset. If this is the boys’ image of their grandfather, what are they going to think of their grandfather? No, their grandfather is a highly intelligent man,” Staci says. “Farmers study science, do research, use technology and try new things. We want to show what modern farming is and portray it in our art.”

They also hope to inspire young people to believe it’s possible to live in their hometowns. Staci’s mom encouraged her to go to art school, but Staci thought, “There is no way I could be an artist and live in a rural community.” She thought artists lived only in cities. 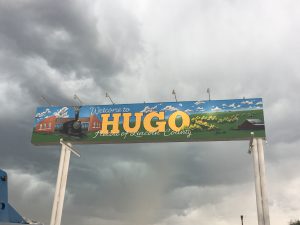 The welcome sign right inside Hugo is a Some Girls and a Mural creation.

Staci and Audrey have a mission to “paint the plains.” Their dream is to paint murals on the grain elevators in the towns along the I-70 corridor from Limon to Burlington — a mural trail to unite the communities and bring economic benefits to the towns.

“I make a big deal about getting people on their feet,” says Staci. “Limon has people walking in town, but in small towns like Genoa or Seibert, because there are so few businesses, people are not out walking on Main Street. So, we create opportunities for people to be out in their community and spending money in the businesses that exist.”

Audrey adds, “I want to let people know that if they are thinking about doing art in their communities, to do it and they will receive the pride and joy tenfold. And I want to express how grateful we are to be able to do this and we really couldn’t without the communities. It’s a testament to our small towns.”

Thinking about the work they are doing today, Staci recalls a woman who showed her a book with barn murals. “I remember looking at her and saying, ‘ that would be my dream job!’”

“I haven’t gotten to paint on a barn yet,” Staci says, “but I am pretty much living my dream life.”

Audrey teases, “It might not be barns, but you get a little ‘bin bling!’”

But Staci is determined. “Someday I’m going to get a barn.”

Gayle Gresham is living her own dream life near Elbert on the eastern Plains, writing, hanging out with grandkids and feeding cows.