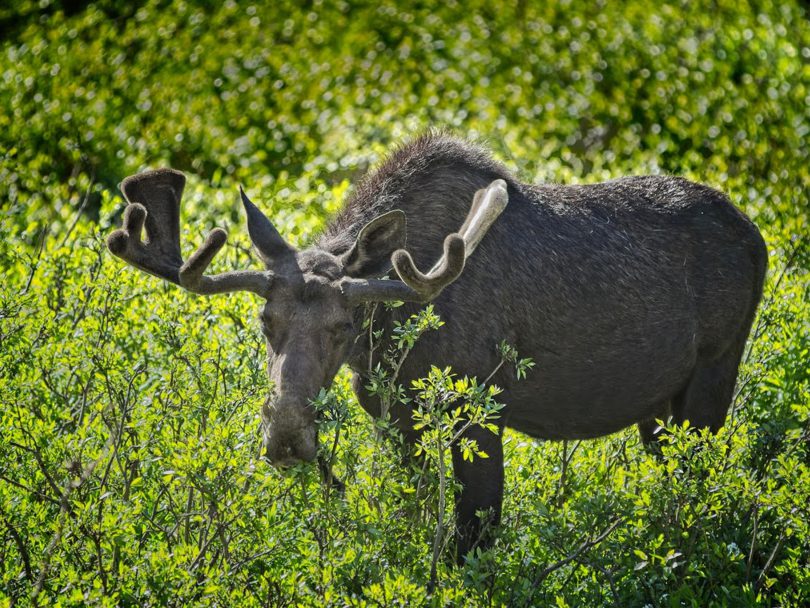 If you knock around the Colorado boonies long enough, you’re bound to run into one of its big, hairy creatures: an elk, moose, cougar or bear. Big game hunters, fishermen, backpackers, avid wildlife watchers and photographers come across wild animals quite often but are usually smart enough to give them wide berth.

Sometimes, though, an unexpected wildlife encounter can turn spooky — or worse. My buddy Andy was bow hunting elk in the Medicine Bow Mountains a few years ago when a mountain lion came to his cow calls instead of the bull elk he was expecting. He’d been calling softly for about 15 minutes when something – a sixth sense? – made him turn around slowly whereupon he found himself staring directly into the piercing yellow eyes of a crouching cougar. A blinding jolt of adrenaline shot through his body, but as he raised his bow to shield himself against an almost certain attack, the big cat just turned and slunk off into the timber. Scared witless, Andy crept nervously back to camp, his heart pounding so hard he thought it was going to explode in his chest like a grenade. The cat was probably discouraged at finding only a scrawny human where a big cow elk should have been, but if Andy panicked and ran, things could have turned out differently.

Two friends and I were stalked by a mountain lion once while fly fishing the Poudre River one summer evening, but we didn’t know it until later. We had crossed a wide, wet sandbar on the way into the river. On the way back out, we found where a cougar followed our tracks across the sand bar, then sat on its haunches and, unbeknownst to us, watched us while we fished. The clearly-defined paw prints and fan-shaped depression in the soft sand made by the cat’s twitching tail left no doubt it had been studying us. Whether it was just curious or considering one of us for dinner is moot; it was still a hair-raising experience.

That same summer we were hiking into a backcountry cutthroat lake near Cameron Pass when we inadvertently walked smack between a bull moose feeding in the willows on one side of the trail and a cow with her calf on the other. We stopped in our tracks, stunned. All three moose raised their heads and stared at us like we had just barged into the family dining room, which, now that I think about it…

The cow laid her ears back and flared her neck hackles straight up. And it was evident from the bull’s posturing that if we didn’t leave immediately he would pound us into a bloody pile of mud pudding. Having no desire to tangle with three angry moose, we backed away slowly until they were well out of sight. Then we took off like a pack of 20-year-old track stars.