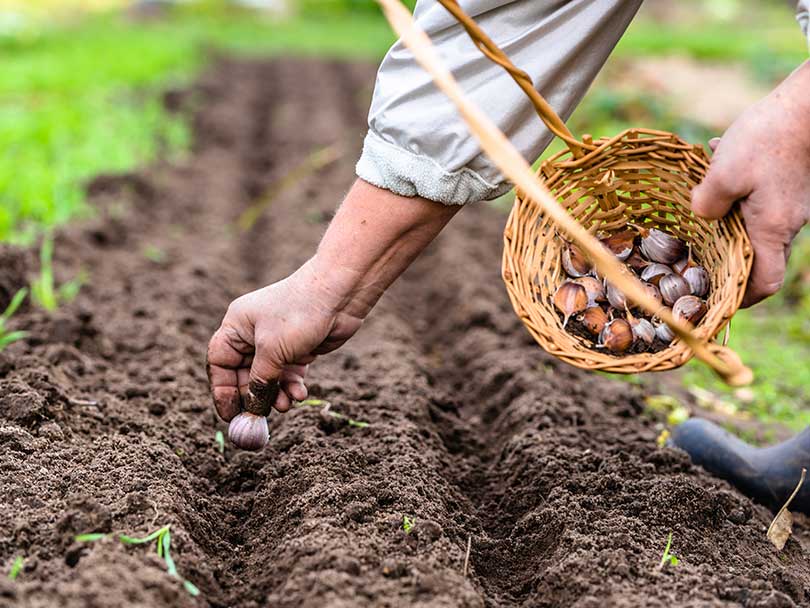 Living in Gunnison where winter arrives early, I would not have thought of planting garlic if it had not been for some friends inviting me to dinner. During last-minute meal preparations, my host said she had to run out to her garden to get some garlic. It was so cold that I didn’t think it was possible, but she came back inside with not just one clove, but several varieties for me to choose from. That is when I first thought about planting winter vegetables.

Unlike most vegetables that are planted in the spring for a fall harvest, garlic is typically planted in the fall or early winter. This is because it is actually a perennial that takes about nine months to mature. Garlic can be planted three to eight weeks before the first fall freeze, or up to two weeks afterward if the ground isn’t frozen. Like other vegetables, it is best grown in an area that receives at least six hours of sun.

Prepare your soil before planting by adding several inches of compost or manure and mixing it together with the appropriate amount of 10-10-10 fertilizer as specified on the label. When planting garlic, you plant individual cloves broken off from a whole bulb. Each clove will then multiply in the ground, forming a new bulb that consists of five to 10 cloves. After two or three years, a single garlic clove will produce dozens of garlic shoots in a small area, forming a nice cluster. Over time, these clusters will need to be divided and thinned. This means you will have a constant source of garlic.

During the summer, you can pull individual stems off the edges of the garlic mass and eat as green garlic. Green garlic is milder in flavor than the cured garlic you buy in the store, but it is a real treat. I’ve only been able to find it occasionally at farmers markets, and then only for a limited time. So why not grow your own? 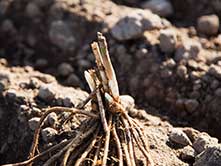 Plant a bare asparagus root in the early spring when the ground is workable. Allow two to three years to produce a harvestable crop.

Since garlic takes little space in the garden, you have several choices of where to grow it. Instead of planting as an annual in individual rows to harvest in the fall, you can use garlic as a border to discourage animals from getting into the vegetable bed, or you can use it as an interesting accent in your perennial flower garden.

What makes growing perennial vegetables rewarding is that they keep producing year after year and require less maintenance than annuals. Some other perennials are asparagus, rhubarb, scallions, leeks and horseradish roots. My favorite is asparagus. Since asparagus takes two to three years to produce, it’s advisable to begin with bare root plants rather than seed. Rhubarb is delicious in pies, especially when combined with strawberries. Although horseradish is not as common in recipes as it was 50 years ago, horseradish roots will prevent many pests and attract pollinators. The main thing to consider when planting perennial vegetables is that their roots should not be disturbed while they are dormant.