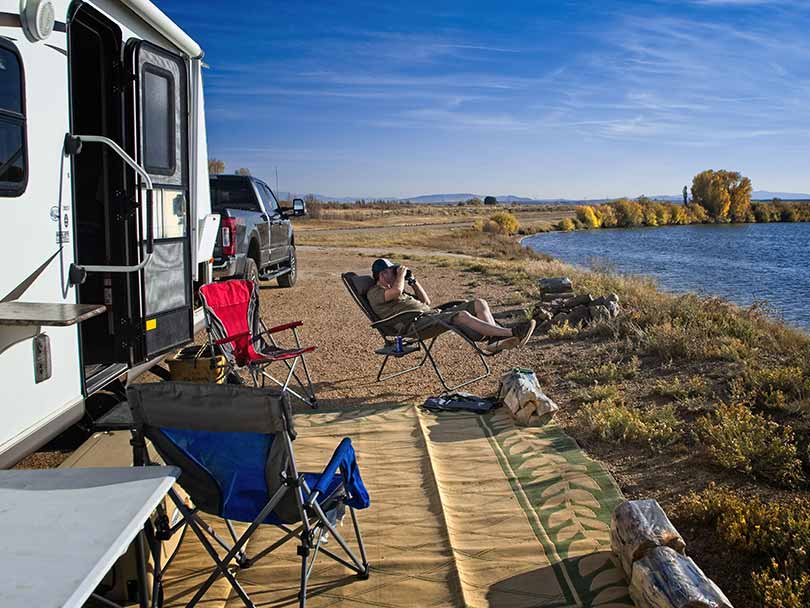 …With or Without a Bite
By Dennis Smith

It’s way too early in the year to seriously consider fly fishing the sagebrush lakes in North Park, but that doesn’t mean I can’t think about them.

No doubt they’re still icebound, but even if they weren’t, I wouldn’t make the trip up there. I’ve never had much luck fishing the celebrated ice-out bite in early spring anyway. The operative theory holds that big trout, ravenous after a long, dark winter under the ice, cruise the edges of the receding ice shelf and newly exposed, sun-lit shallows in search of hatching chironomids, caddisfly larvae, leeches and whatever else Mother Nature might offer. If you’re there at the precise time those cruisers come through and you cast a reasonable fly to them, you stand a good chance of hooking the fish of a lifetime. But, as in much of life, timing is everything and where these ice-out lunkers are concerned, my timing has always been painfully, consistently, off.

No loss; it’s not my favorite kind of fishing anyway. I no longer enjoy the imagined machismo of standing around in bitter, howling winds and frigid water up to my you-know-what, smothered in collective layers of merino wool, down, and GORE-TEX just to catch a fish, though I once did. I was much younger then, of course, and hardier I suppose, eager for adventure and quite willing to endure whatever the elements demanded, no matter how harsh.

These days, I much prefer to fish the lakes long after ice out — much longer. In late summer, actually, and early fall after the mosquitoes have died off and you can make your camp so close to the water’s edge you can feel the waves lapping the shore while you sleep, and when you can sit by the fire at night with only a wool sweater and a bourbon sundowner to ward off the chill. And when, from the sunny-warm comfort of an afternoon camp chair, you can glass deer and antelope meandering the rambling acres of toast-colored sage on the hillside across the lake. And when, while the sun slips into the Medicine Bows and the wind sighs to a whispering quiet, you can launch a float tube, row your way out to where a mist-green weed bed is swaying to the mysterious rhythms of the universe in the depths below and cast a likely fly. If you time this just right, you stand to hook the fish of a lifetime.

If not, well, you won’t care in the least; there’s a sundowner waiting for you by the fire.